'You can see the essential contours of his new Pakistan strategy. Rather than keep engaging with or humouring them, he'd rather work on taking their four biggest supporters -- the US, China, the UAE and later Saudi Arabia -- away from them.'

'In his calculation,' says Shekhar Gupta, 'with the total support of all four of these, Pakistan will be forced to moderate its policies.' 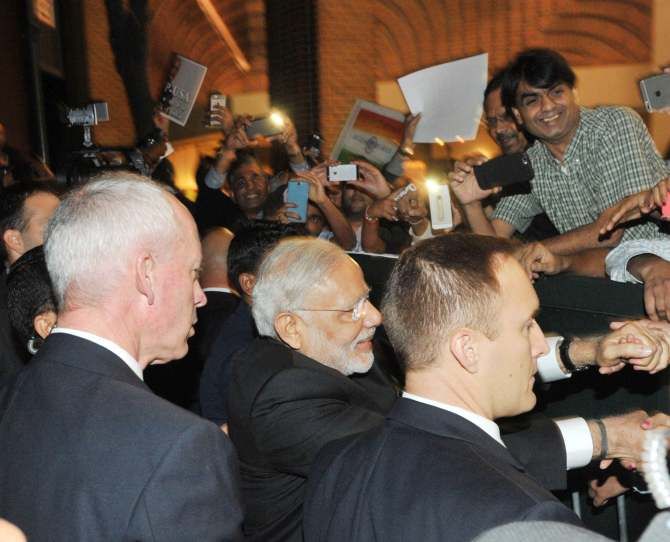 A smart quote from a taxi driver is a reporter's oldest ploy and would invite instant derision and sniggers. That is no reason, however, to stop leaning on taxi-drivers' wisdom and power of observation because they see and hear a lot more than we journalists do, particularly if they happen to be New York taxi-drivers.

This week, they were obsessing over Pope Francis. A papal visit always throws traffic out of gear and taxi-drivers can be forgiven for hating it. But they were also talking about one more head of government in this annual gathering of leaders of all of the world’s nations to speak at the United National General Assembly.

Narendra Modi's second New York visit within a year does not have the buzz of the first. But he is the third most noticed and talked about foreign head of government in New York this week, after US President Barack Obama and the Pope, of course.

It is mostly because of the commotion his desi loyalists make whenever he comes visiting: Colourful dresses, turbans, dholaks, posters and banners mostly hailing him as the great moderniser of India, but the odd one, particularly in streets more frequented by Indians, as in the clump loosely called Little India on Manhattan's Lower East Side, also calling him a murderer.

Modi polarises overseas just as he does back home, but he is the first Indian leader in New York ever that even taxi-drivers take notice of.

It is quite remarkable how, in just over a year, Mr Modi has risen in stature to be among the most talked about global leaders even in the busiest city in the world. Remarkable still that he has done so in spite of many disadvantages: he does not come from a political dynasty, speaks limited English, certainly doesn't match most of his predecessors or peers in academic accomplishment and, until a year ago, wasn't even allowed to travel to the Western world. But he passes the taxi-driver test of leadership.

I am reminded of a 1993 conversation with Don Graham, then owner and publisher of the Washington Post, on how little India was covered in American media, including the Post. At the same time Pakistan and Benazir Bhutto featured often enough. This despite the fact that Narasimha Rao had just opened up India's economy. (Such was the ignorance and lack of familiarity then that the House Speaker, while introducing him before his address to a joint session of the Congress a year later, called him 'Nar Sharma Rao.') Graham had an explanation. 'We Americans,' he said, 'have a hard time focusing on countries and societies not represented by strong individuals or dynasties.'

Mr Modi fills that gap for India after a full 25 years. He may not have the moral stature of Nehru or Indira or the youthful charm of Rajiv Gandhi, but he makes up for it by exuding power, authority and is unapologetically extroverted, hyper-communicative, atypically for an Indian.

No surprise that big media takes notice of him even when he hardly does any interviews, and we say that not just because Rupert Murdoch came calling. Big business, reeling under a shakeout in China, looks up to him. And world leaders, most younger than him, are drawn to his native informality.

Mr Modi has made brilliant use of the NRIs. The largely Gujarati crowds of New York -- mainly traders, grocers, motel owners, immigration lawyers and others such -- have enhanced his visibility. On his last visit they filled Madison Square Garden, and it became the visit's highlight. But more importantly, now he is drawing the techie Indian inside his tent as well.

Unlike Gujarati NRIs, they are not natural BJP supporters, but they are enormously more influential. That's why the visit to Silicon Valley and the day out at Facebook. After Mr Obama, Mr Modi is the most prolific and successful user of social media among all heads of government.

The key question is whether he would leverage this new global eminence in domestic politics or to advance India's foreign policy interests. It is often said that all heads of State/government who join the annual pilgrimage to the UN General Assembly make long speeches only aimed at domestic constituents. Mr Modi will do some of that too, for sure. But he also has the unique opportunity to cash in on his new stature to further India's foreign policy interests, particularly as he seems to have redefined some aspects of it and even set a radically different course from the past.

India-US relations have been getting warmer for two decades. But he has given it an entirely new momentum, without the old diffidence or hesitation of Congress governments. Key American policymakers in Washington say that while the US enjoyed a relationship of warmth and mutual trust with Manmohan Singh's and Mr Vajpayee's administrations, neither was as enthusiastic, energetic and unhesitating as is Mr Modi's.

He is acknowledged to have ended the old chronic anti-Americanism in the Indian policy establishment. He is also using government-to-government armament orders as an instrument of foreign policy, following up the Rafale purchase announcement in Paris with the order for American helicopters on the eve of this visit. 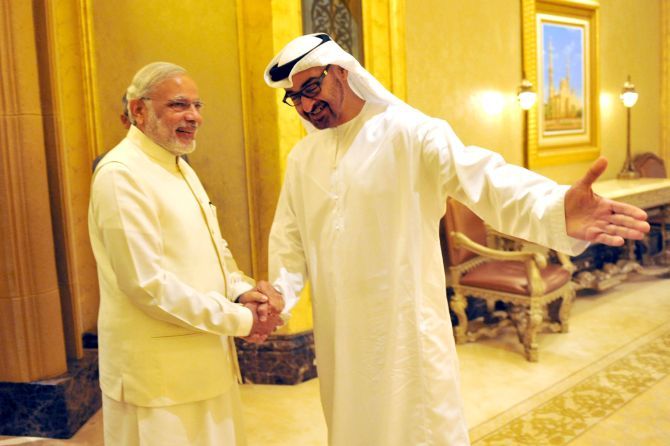 He has greatly remodelled Manmohan Singh's policy on how to break out of the suffocating triangulation with Pakistan and China. Mr Singh wanted to reach out to Pakistan, Mr Modi would prefer to talk to China first. You can also see the essential contours of his new Pakistan strategy. Rather than keep engaging with or humouring them, he'd rather work on taking their four biggest supporters -- the US, China, the UAE and later Saudi Arabia -- away from them.

That may also explain the lack of outrage by India at the rapist Saudi diplomat in New Delhi and now the video showing an Indian worker being beaten up there. Modi does not want anything to threaten his planned visit to Saudi Arabia. In his calculation, with the total support of all four of these, Pakistan will be forced to moderate its policies.

Foreign policy is a patient, still largely conservative, business. Good inter-personal relations, communication and image of a growing India are great pluses to have in that pursuit. Even his critics would acknowledge that Mr Modi has these qualities in ample measure. His test will be to prove that he doesn't get carried away and reduces his foreign visits to laboured image-building exercises for home audiences.

He now has the opportunity to build a real global success story by maturely exploiting an opportunity he's created with his communication talent and hard work. It is his to lose. 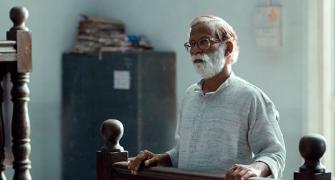 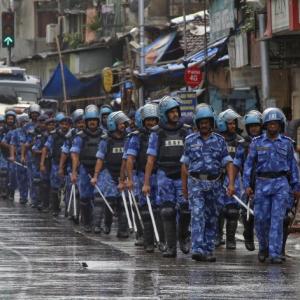