'In enacting the citizenship law, the BJP's focus has been so much on consolidating its Hindu vote bank all over the country to divert attention from the economic downturn that the party forgot that there are Hindus and Hindus and that one group of Hindus may not always be warmly embraced by another,' notes Amulya Ganguli.
Illustration: Uttam Ghosh/Rediff.com After the euphoria bred by the party's second successive Lok Sabha victory about rapidly fulfilling its -- and the Sangh Parivar's -- dream of converting India into a land of, by and for Hindus, the outbreak against one of the cornerstones of the Hindutva project -- the new law on citizenship -- must have come as a rude shock.

Till the violence broke out, the BJP appeared to cherish the hope of marching unimpeded from one Hindutva agenda to another -- the revocation of Article 370 to show Muslims their place in the Kashmir valley, the citizenship law, the national register of citizens, and so on.

Now, the BJP may have to slow down and take a deep breath.

The reason why it has stumbled in Assam is that as a party of Hindi-speaking, vegetarian, chapati-eating north Indian Hindus, it doesn't have the faintest idea of the landscape beyond Aryavarta.

Assam typifies such an unfamiliar terrain for the Parivar.

Consumers of rice and non-veg food, the people of the state zealously guard their distinctive identity.

Moreover, it has long been felt there that this identity is under threat from what used to be East Bengal, then became East Pakistan and is now Bangladesh.

The perception of threat is from another group of rice-eating non-vegetarians -- the Bengali-speaking Muslims of East Bengal and Bangladeshi Hindus.

The migration of hardy East Bengali Muslim peasants into Assam from the 19th century onwards, which was dubbed the 'grow more Muslims' policy by the British viceroy, Lord Wavell, continued even in the post-Partition period.

But the influx of Bengali-speaking Muslims was accompanied by the growing presence of Bengali Hindus from Bengal before and after Partition.

The Assamese feared the rise in the number of Bengalis of both denominations will reduce the locals to a minority status similar to the fate of the Tripura tribals.

It was this apprehension which fuelled the anti-Bengali disturbances in Assam in the 1960s.

Known as the Bongal kheda (oust the Bengalis), the movement saw a partial revival during the 1979-1985 agitation by the All Assam Students Union although it was mainly directed against the illegal Muslim immigrants from Bangladesh.

Even then, there was a flight of Bengali Hindus to West Bengal during this period.

Today, it is again the fear of immigration from Bangladesh which has brought AASU to the fore against the new citizenship law.

The apprehension among Assamese Hindus is that the lure of securing Indian citizenship will lead to yet another influx of Bengali Hindus to the state as also to other parts of the north east, posing a demographic, linguistic and cultural threat to the locals.

During the 1979-1985 agitation, the BJP sided with AASU, largely because of the anti-Muslim character of the campaign with Arun Shourie (now in the 'secular' camp) playing a leading role.

More recently, the BJP's political successes in Assam and elsewhere in the region was based on the exploitation of the anti-Muslim thrust of the earlier agitations.

In enacting the citizenship law, however, the BJP's focus has been so much on consolidating its Hindu vote bank all over the country to divert attention from the economic downturn that the party neglected to consider the nuances of such a policy.

It forgot that there are Hindus and Hindus and that one group of Hindus may not always be warmly embraced by another.

There are also non-Hindus, as in Meghalaya and elsewhere in the north-east, who do not share the BJP's fondness for the Hindus.

Besides, the earlier anti-Muslim slant may have been sidelined in Assam and the neighbouring states by the anxiety over the advent of a large number of Hindus.

It is this diversity of attitudes which is beyond the BJP's ken. 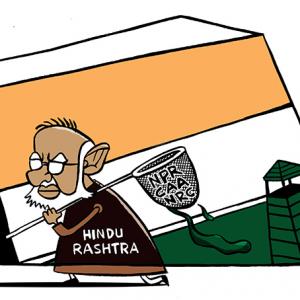