It is now a different time in Bihar. It is a different place -- one in which Raghuvansh Prasad Singh's options are very limited, notes Aditi Phadnis. 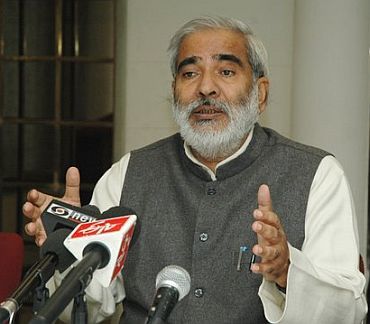 With this, a social experiment in Bihar has come to an end.

Some background. It was March 1990. V P Singh had become prime minister and Devi Lal deputy prime minister just a few months earlier, following the historic Janata Dal Parliamentary Party meeting in the Central Hall of Parliament, from which Chandrashekhar strode away in bad grace, furious at having been short-changed by Devi Lal (who, having assured him of his support had changed sides at the last moment, resulting in V P Singh's ['election' as PM).

On March 10, a group of observers, including George Fernandes and Ajit Singh, was sent to Patna to facilitate the election of the chief minister.

This was no ordinary contest, but a proxy one. The prestige of the top leaders of the Janata Dal was involved.

After the bitterness due to his election as PM, V P Singh wanted to demonstrate that he had consolidated his position politically.

Devi Lal wanted the world to know it was he who was the real PM and V P Singh just a puppet.

And for Chandrashekhar it was a way of sending the message that when it came to support, he was the real heir to the socialist legacy.

The contest for the chief ministership was between Ramsundar Das, whom V P Singh and George Fernandes both favoured; Raghunath Jha, whom Chandrashekhar supported; and Lalu Prasad Yadav, who was Devi Lal's choice.

All three represented various Socialist streams in that cornucopia of Socialism that is Bihar.

In Patna, the scenario was slightly different.

Veteran Socialist and chief minister Karpoori Thakur had died in 1988 and confusion about his political heirs was widespread.

Among his trusted lieutenants were two or three young men who had emerged on the scene after the JP movement.

Nitish Kumar was a Kurmi. Lalu Prasad was a Yadav and Raghuvansh Prasad Singh, a Thakur.

Both Nitish and Raghuvansh babu, as he is called in Bihar, had been incarcerated during the Emergency.

Lalu Prasad was not intellectually in their league, but because he had a quick turn of phrase and was good at oratorial satire, was considered an important player on the team.

The 1990 election was seen by Nitish and Raghuvansh babu as a way of getting rid of a fossilised and entrenched intermediate caste leadership in Bihar, bequeathed by Lohia and Karpoori.

So when Lalu Prasad laid his claim for chief ministership, he had powerful backers.

As a Kurmi, Nitish brought to the table a numerically small but powerful caste interest group.

He worked tirelessly to ensure Lalu was made the chief minister.

In that election -- and it was a real election, not a make-believe one where the decision is always left to the high command -- Lalu got 58 votes and Raghunath Jha got 14.

What was Raghuvansh Prasad's motive in promoting Lalu? Ridiculous as it may sound today, it was idealism.

Raghuvansh Prasad has a PhD in mathematics.

He was teaching in a college in Sitamarhi and jailed during the Emergency because of his Socialist affiliations.

He was also dismissed from service. Then he made politics his profession.

Politics was about rebellion.

Bihar is the only state in India where upper caste leaders didn't just pay lip service to Lohia's 'Chaukhambha Raj' theory -- they actually participated in implementing it.

Upper caste Socialists in Bihar tried to fight social pressures in their own ways.

Some dropped their surnames. Others kept their caste identity alive, but tried to change mindsets from within. Raghuvansh Prasad belonged to the latter category.

Having created Lalu Prasad, both Raghuvansh Prasad and Nitish realised he had severe limitations.

But as an administrator, he had absolutely no vision.

He was also not especially democratic, in the grip of courtiers and deeply intolerant of criticism.

But Raghuvansh Prasad had no option. He could not leave Lalu. Occasionally, he would speak of something Lalu had done slightingly, with a half-smile and a shrug of resignation.

There was another Socialist leader who was also a Rajput: Jagadanand Singh.

The relationship between Raghuvansh Prasad and Jagadanand Singh was always of deep suspicion.

When Jagadanand Singh was made president of the state unit of the RJD in November last year, Raghuvansh Prasad Singh could see the writing on the wall.

But when the man who had defeated him in the 2014 elections, Rama Kishor Singh, nominated by the Lok Janashakti Party, joined the RJD, Raghuvansh babu had no choice but to walk out.

It is now a different time in Bihar.

It is a different place: one in which Raghuvansh Prasad Singh's options are very limited. 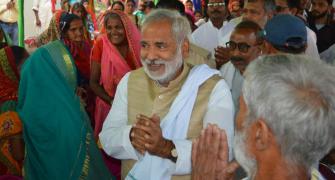