'The political leadership of this country needs to decide whether it wants to mitigate these challenges to the nation by making necessary correction or whether it wants to ignore these questions that Yakub's noose has left behind,' says Ankur Bhardwaj. 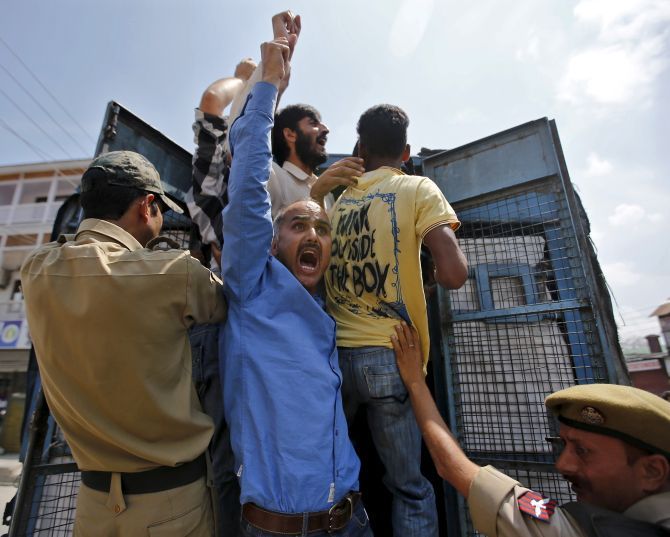 IMAGE: Agitators shout slogans after being detained by the police during a protest against Yakub Memon's execution in Srinagar. Photograph: Danish Ismail/Reuters

Yakub Memon was hanged in the Nagpur Jail on Thursday, at 7 am. His case became the subject of much debate over the last week. Public discourse in India is mostly devoid of nuance and the Yakub Memon case was no different. Strident positions were taken not only in the court of law, but also in the public sphere.

Memon's case has reached closure with his hanging, but it leaves in its wake inflamed passions, injured psyches and heightened distrust between various sides.

Most importantly it leaves the Indian State in a difficult situation; one that it ought to extricate itself from quickly and cleanly.

As with every major debate in the public domain, this case too had multiple subtexts. These ranged from desirability of capital punishment in a democratic society, to fairness of the judicial system, to the siege the minorities (namely Muslims in this case) in the country are under.

Memon's case thus became the touchstone to either confirm or reject various hypotheses. For convenience and understanding's sake we need to take these issues up one by one.

(Full disclosure: I am not opposed to capital punishment in rare cases.)

The debate on capital punishment was an academic and ideological debate. There exists a view that just and humane societies should not take away human lives, whatever maybe the crime. Those arguing in favour of capital punishment stress on its deterrent (and perhaps retributive) aspect.

While both remain legitimate ideological positions, this clear ideological position got muddled in the case of Memon. Some of those arguing in favour of the death penalty for Memon, seemed to morph into lynch mobs out to satisfy their vengeance. They refused to let the opponents have the freedom to oppose capital punishment and tried to browbeat or outshout them.

Was capital punishment desirable for Memon?

This remains a purely academic exercise, one that was answered sufficiently (and repeatedly) by the courts. Whether this advanced the debate on capital punishment per se remains highly doubtful.

Is the judicial system fair?

The fairness of the judiciary is questioned by pointing to the selective nature of prosecution.

Critics have rightly pointed out that the culprits of the 1984, 1992, 2002 riots have not yet been punished. Others have specifically pointed out to the 1992 riots and the Srikrishna committee report, whose findings have been summarily ignored while the same state has been vigorous in pursuing closure for the Bombay (now Mumbai) blasts and other such cases.

There are two implications of this argument: One that directly concerns Memon and another that has much wider ramifications for the State as a whole. The hypocrisy of the State in dealing with Memon with a stronger hand than it has used for the accused in the cases of the riots is easily established.

What remains unanswered is how that mitigates his crime? Does it help Memon to argue that while he may be guilty of the crimes he is accused of, the State has been guilty of hypocrisy as well? This remains a very weak and ineffective argument.

However, if we take a bird's eye view of how this affects the State's legitimacy, we are hit by the importance of this allegation. How does a just State rationalise this evidence of hypocrisy?

Does it not undermine the institutions of the State and the State itself? It does, as it attacks the basic premise that all citizens are equal. This brings about dangerous fissures in the body politic and requires urgent corrective action.

The minorities are under siege IMAGE: Hundreds of people gather outside Yakub Memon's home in Mahim, north-central Mumbai, ahead of his burial on Thursday, July 30. Photograph: Sahil Salvi

In 2013, the then home minister Sushilkumar Shinde, had promised to examine the need for fast track courts for Muslim youth held on terror charges. Recently, The Indian Express carried a story about seven Muslim men accused (and as yet innocent) of terror in Malegaon who had been freed after five years in prison.

Last year, the director generals of police of three states, conceded in a report jointly authored by them, that the Muslim allegation of the police being unfair with them was based on reality.

There are numerous cases where young Muslim men have spent long time in prison on trumped up charges or flimsy reasons.

The lack of substantive as well as procedural justice for minority communities like Muslims and Sikhs in cases of riots is widely acknowledged. The failure of the State to book perpetrators of riots across states, under different political parties is well known.

In the Yakub Memon case as well, it was argued by some, in the public discourse, that he was targeted as a result of his religious beliefs. While the targeting of Muslim youth on flimsy grounds is well known, this too remained a weak argument in case of Memon. His guilt was proven conclusively and repeatedly in the courts with the legal system providing him every chance to argue his case.

Did it remove his guilt to point out that he was a Muslim? The question is absurd and does not deserve to be considered. The variable of faith was added to the whole equation in the most cynical of fashions.

While we have considered the three subtexts in Memon's case, we can conclude that while all three are weighty arguments, in this case, only one was rightly invoked. Memon's hanging could have been opposed only on the ideological grounds of opposition to the death penalty, but it was not the only reason used.

The dangerous narrative of betrayal and victimhood was employed with little regard shown for his guilt.

The clever argument of absence of similar sentences in other cases was used in combination with the morally upright argument of opposition to capital punishment with no regards shown for how weak and opportunistic this formulation was.

The Muslim identity of the accused was highlighted by two kinds of arguers. One were those that wanted to highlight how Muslims engage in terrorist activities and thereby heap ignominy on all Muslims. The other side that invoked the Muslim identity were Memon's defenders.

The attempt was to use the argument of Muslim victimisation. They made no attempt to substantiate how this was a legitimate case and only tried to dip into an existing pool of grievance.

The dangers of this approach are that it breeds alienation if the judgement does not go in your favour. After the Supreme Court had rejected the petition in the very early hours, Memon's lawyer commented that it was a 'tragic mistake' by the court.

Will it breed more trust on the system or erode it?

In the absence of this belief, we push those communities into festering victimhood and disenchantment. This only engenders threats for the nation State. It becomes the breeding ground for harder strategic challenges.

The example of the Khalistan movement is not that old. The creation of Bangladesh was a result of this belief that West Pakistan was not doing enough for East Pakistan. 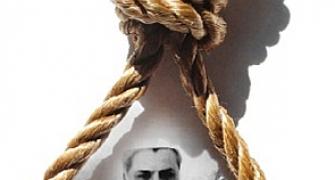 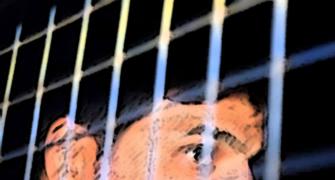 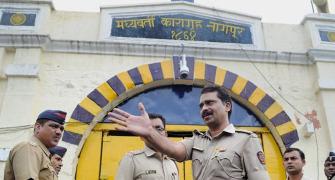 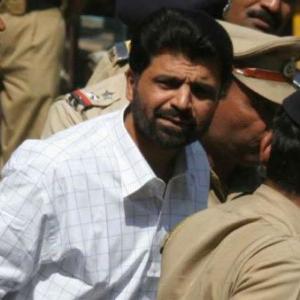