News
Business
Movies
Sports
Cricket
Get Ahead
Money Tips
Shopping
Sign in  |  Create a Rediffmail account
Rediff.com  » News » America in the Trump era: What desis must do

'For some South Asians, it may be tempting to think "I'm not Muslim, this doesn't really affect me".'
'But please know, it affects all of us,' says Arun Venugopal, a reporter at WNYC in New York. 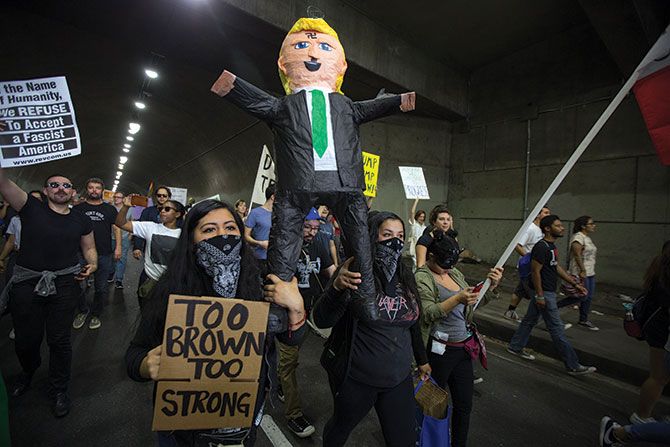 In the wake of a highly emotional election, I know many of you are shaking off the dust, wiping off the tears and trying to be the best, most productive member of civil society you can be.

You're calling your elected representatives, you're sending money to important causes and some of you are actually hitting the streets to join in protests.

If I might add to these things, it's also critically important that you and your children Know Your History. Know OUR history.

By which I mean, not just American history in general, but the complicated and often ugly history of South Asians in America.

Today, we are in many ways a privileged class. We earn well above the median, and have lots of degrees next to our names. We are, by some measures, the most successful minority in the history of this country. We are often exalted.

But there was a time when we were a reviled class, and on this front, we're shamefully un-educated.

Just over a hundred years ago, the United States Congress held 'Hindu Immigration Hearings' to determine whether people from British India should be prevented from entering the country.

Hindu was a term of willful ignorance, lumping together Sikhs, Hindus and Muslims.

During these hearings, people from India were called 'a thick-headed and obtuse sort of people... they cannot read our language any more than a horse can.'

They were called 'an eyesore to every man who has high ideals.'

'They are a dirty lot of fellows,' said Representative Denver S Church (Democrat-California). 'You can see the grease and dirt on them whenever you see them... they smell, and sometimes a person can hardly stand it. I do not think they can follow out their national tradition of bathing.'

The hearings drove home the point that these people would bring diseases to America. But the REAL fear was that immigration from India and other parts of Asia would dilute the overwhelming power of white Americans.

Since the 1800s, whites had comprised nearly 90 percent of the American population and it was felt that they would be committing 'race suicide' by allowing more immigration from Asia and other non-Western countries.

Ultimately, Congress passed the most sweeping immigration laws the US had passed to date. The Immigration Act of 1917 created an Asiatic Barred Zone, meaning that a large portion of the world's population was shut out of America.

The Act, by the way, was vetoed by President Woodrow Wilson in December of 1916 before he was overridden by Congress. We are fast approaching the centenary mark of this terrible legislation.

Why do I say all of this?

I suppose because I've only recently discovered this history myself, and I was deeply affected by it.

When I was growing up, nobody told me that Indians had come to this country in earlier generations, let alone that we were so deeply loathed, and then kept out of the country altogether.

Ensconced as many of us were in our comfortable suburban enclaves (often historically segregated neighbourhoods), we seemed to live at a remove from American history.

In a literal sense, we HAD been removed.

And now we're confronted with a presidency that may be the most virulently anti-immigrant since we started coming to this country in significant numbers in the 1960s.

Trump's chief strategist Stephen Bannon is a favourite of white supremacist groups and has suggested that there are too many South Asian CEOs in Silicon Valley.

There is serious talk of a national Muslim registry.

For some South Asians, it may be tempting to think 'I'm not Muslim, this doesn't really affect me.' But please know, it affects all of us.

We are at an extraordinary, chaotic, moment in American history, and at the heart of this turmoil is a demographic crisis: White Americans now comprise just over 60 percent of the population, and in time, they will be a minority.

While some whites are dealing relatively well with this paradigm shift, and embracing the diversity of America, for others the transition is proving to be traumatic.

For example, the number of chapters of the Ku Klux Klan nearly tripled last year, in large part because of the push to remove Confederate flags and other symbols of Southern and white supremacist history (South Carolina Governor Nikki Haley, an Indian American, played an active role in this).

The election itself has unleashed all sorts of violence, with hundreds of reported acts of hate and intimidation taking place in the days since Trump won.

According to the Southern Poverty Law Centre, 'anti-black' and 'anti-immigrant' hate are the most common.

People of colour are seen as a threat to the old order, and it is crucial that they form alliances and understand their common history, the ways in which certain ethnicities are demonised.

Where to begin? Here are a few tips:

One, read books about our history, as well as articles. At the moment, I'm reading The Other One Percent: Indians in America, which is where I first learned about the Congressional hearings I cited earlier.

Vijay Prashad's Uncle Swami and The Karma of Brown Folk are popular texts, as is Vivek Bald's Bengali Harlem.

The Web site of the South Asian American Digital Archive (or SAADA, of which I'm a board member) is a good place to start, especially its Tides online magazine (external link), which takes readers to fascinating moments in South Asian American history, like 'The American Yoga Scare of 1927' (read it, it's crazy).

Two, write articles for your community, or push your kids to do so.

There are plenty of great community newspapers, such as India Abroad, as well as blogs and news outlets in India which are interested in deep-dives into our history.

Three, if you are active in a temple or other religious institution, or a cultural organisation, push for the curriculum to be more expansive and rooted in our history, not simply mythology and ancient philosophy.

This is a great way for children, and especially teenagers, to feel a connection to their own community.

Furthermore, it's high time that our central institutions grapple with the uncomfortable truths of this country. We've been in denial far too long.

Arun Venugopal is a reporter with WNYC in New York, and a board member of SAADA, the South Asian American Digital Archive. 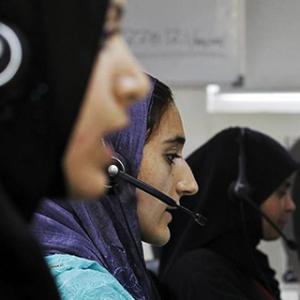