Uttar Pradesh's youngest Chief Minister Akhilesh Yadav, in place since 2012, stands eclipsed under the shadows of his father and uncles. With the state going to polls soon, he needs to show he's in charge and ensure connect with citizens, says Virendra Singh Rawat. 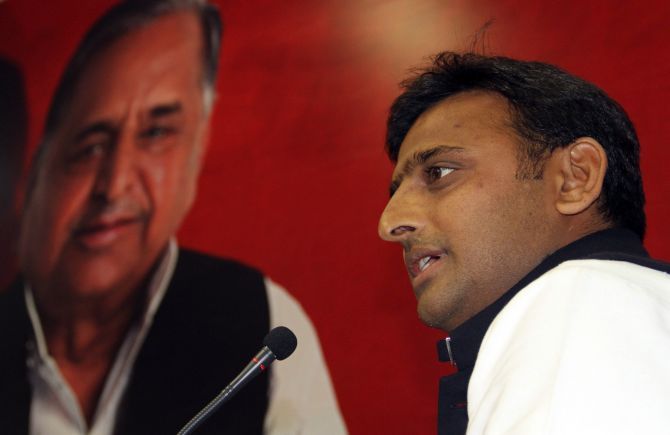 Akhilesh needs to come into his own in order to woo voters. Photograph: Pawan Kumar/ Reuters

It was a warm afternoon in Lalitpur, Uttar Pradesh, on September 20 this year. The arid district was to witness the formal inauguration of the first unit of a 1,980-Mw thermal power plant.

Chief Minister Akhilesh Yadav was to do so, in the presence of the ruling Samajwadi Party chief, also his father, Mulayam Singh Yadav, and promoters of the Bajaj Hindusthan group, setting up the plant for an estimated Rs 16,000 crore. Months had gone in preparing for a grand function and journalists from the state capital had been especially flown in by the government.

However, the CM abruptly chose to skip the event and instead went to Agra for another event, a comparatively low-key affair.

Mulayam, who inaugurated the plant instead, said in his brief address that the CM should have been present.

No official reason was given to the CM's no-show but tongues started wagging at the possible motive. The speculation was that it was a manifestation of the power struggle in the party's first family.

The multiple power centres in the SP -- Mulayam, mercurial senior cabinet minister Mohd Azam Khan and Akhilesh's powerful uncles, Shivpal and Ram Gopal Yadav, have continued to cloud Akhilesh's judgement and capacity to intervene in government matters, as they had since he assumed office in 2012. More than the reality, perhaps, but the perception remains strong as ever.

Some recent incidents have strengthened rumours about a power struggle and a simmering rift.

This year, Akhilesh skipped the first part of the 'Saifai Mahotsava', the high-octane social, cultural and sports fair organised in the Yadav's native village in Etawah district. It is an extravaganza in the state government calendar whenever the SP is in power.

Akhilesh had never absented himself here; in fact, in earlier editions, he'd led the organisers from the front.

The media is abuzz with speculation that the CM distanced himself from the initial festivities as he was upset over the recent dismissal of his close aides on Mulayam's directions. These included Sunil Yadav 'Sajan' and Anand Bhadauria, influential youth party leaders and credited with helping galvanise support from the younger population in the run-up to the 2012 state polls, which the SP had won with a majority.

Both have been charged with anti-party activities and working against the official nominees in the recent first phase of the state panchayat elections. The party had received complaints from several quarters.

While SP leaders are rubbishing claims of any rift in the party, the dismissals have not only re-stamped the supremacy of Mulayam in the organisation but undermined the authority of Akhilesh.

The SP has also suspended or expelled several other party leaders, including some considered close to Azam Khan. Its terse message is that it would not tolerate indiscipline. More such action is being anticipated as the SP prepares for the 2017 state polls.

In his political journey thus far, Akhilesh has had his share of challenges. After the SP won the 2012 polls, party seniors wanted Mulayam to don the CM's mantle but he made his wishes clear: he wanted Akhilesh in the seat.

It took maturity and patience on Mulayam's part to prevail upon the seniors, especially Azam Khan, to accept this.

The question then is, why is Azam Khan so important and how has he got into a position of having a veto?

If the SP is to continue winning elections in UP, it needs to have a Muslim face. That Muslim face is Azam Khan.

The son of a farmer from Rampur, the seat of the family of the Nawab of Rampur, Azam Khan was stirred by the anti-feudalism movement. Khan helped organise the Muslim community in Rampur against the mighty Nawab.

During the days of the Emergency, he was arrested from Aligarh, where he was studying for an LLM degree. In jail, he met Mulayam and the two became friends. Khan joined the Janata Party (Charan Singh) and became a member of the legislative assembly in 1980.

Since then, he has been the most powerful opponent of the Congress in the state. Khan supported Mulayam Singh when the latter took charge of the Janata Party and re-launched it as Samajwadi Party.

In the 1980s, the Babri Masjid Action Committee was set up. Few know it was actually launched at Khan's official residence.

Khan was conscious of the fact that several forces were working against him and his colleagues at the BMAC.

Repeatedly, he said he derived his ideological strength from Maulana Muhammed Ali Jauhar, one of the protagonists of the Khilfat movement.

The SP swept the assembly elections and Mulayam announced the state government would hire Urdu teachers and translators. Following an incident of firing on Karsevaks, Muslims began to feel not only Khan, Mulayam was also a saviour.

However, after Singh came into power, the promotion of his family and caste began to irk Khan.

To cut Khan down to size, Jaya Prada was given the Rampur Lok Sabha seat. Many said it was at the instance of Amar Singh, then Mulayam's right hand man.

Khan and Mulayam drifted away only to come together again when Amar Singh was driven out of the SP.

Khan continues to have both credibility and standing among the Muslims of UP: but lately, he has been resentful of clan promotion by Mulayam.

Last year, the SP was routed in the Lok Sabha polls in the face of a resurgent Bharatiya Janata Party propelled by the 'Modi wave'. It could win only five of the state's 80 Lok Sabha seats, against the BJP's 71.

In then started to crack the whip against perceived non-performers and dim voices even sought Akhilesh's scalp. However, Mulayam was uncompromising on Akhilesh and he survived. Even so, 36 party leaders holding ministerial ranks were dismissed. Interestingly, though, several were later reinstated, being close to Mulayam or some other leader.

Akhilesh, the youngest ever UP CM, has been the subject of ridicule for not being in full control of his government, with remarks that there are four and a half chief ministers -- the multiple power centres of Mulayam, Shivpal, Ram Gopal and Azam Khan, the half referring to Akhilesh!

He has on many occasions been chided publicly by Mulayam for tolerating non-performing ministers and for his allegedly slack grip on the bureaucracy.

Akhilesh has consciously attempted to shift to a more progressive formula for electoral success, especially after the 2014 rout.

While several populist schemes such as free laptops or the unemployment dole were put on the backburner, the government stepped on the gas for development projects and for attracting investment.

Flagship infrastructure projects such as a Lucknow Metro Rail, Agra-Lucknow Expressway and Lucknow IT City have been given timelines for completion before the 2017 poll.

The government has planned the ramping up of power generation and transmission, promising 24 and 22 hours a day of electricity in the urban and rural areas by 2017.

Time is in short supply for Akhilesh to not only deliver on these development promises but to show he in command. He does continue to enjoy a clean image, of a modern-day politician without the smear of personal corruption, nepotism or impropriety. He is tech-savvy and active on social media, reaching out with regular posts and updates.

He is keen on modernising the state police and upgrading the road network. The government has announced new policies in all key sectors -- industry, agriculture, energy, solar power, tourism.

The government has engaged global consultants and partners to help frame new policies and for improvement in public services.

"He needs to strongly subdue the campaign that there is a rift in party. Besides, the ruling party and the state dispensation have so far failed to connect to the masses in creating awareness about development projects. This needs to be corrected before the next polls," he says. 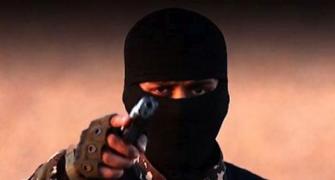 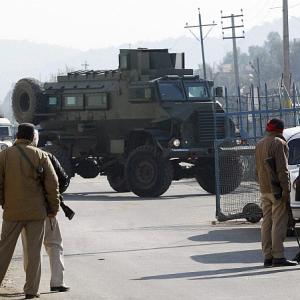