'The Indian strategy is to rope in the powerful Pakistan army in the negotiating spectrum. This can be done at the level of General Janjua, a former army commander,' reveals Rajeev Sharma. 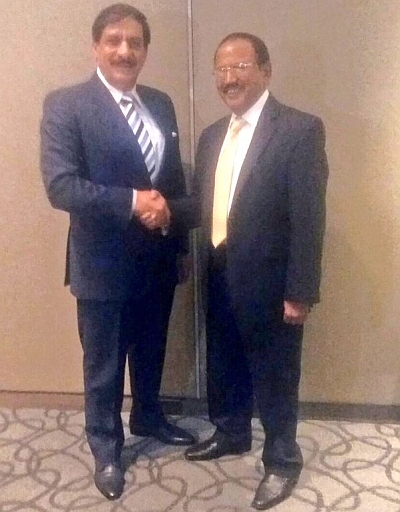 The big picture about the India-Pakistan proposed dialogue at the level of foreign secretaries is this: The process is being choreographed from the Prime Minister's Office, not the ministry of external affairs. And the open secret is that the man in charge of the process is National Security Advisor Ajit Doval. None else.

When the foreign secretary-level talks will take place, if at all it takes place, will be determined by Doval's negotiations with his Pakistani counterpart Lieutenant General Nasir Janjua (retd).

The two NSAs will meet shortly, possibly in Europe, away from the media glare.

The NSAs' meeting will decide the fate of a structured dialogue between India and Pakistan. This is the level of talks that one must bother about. Not the foreign secretary-level talks.

It conveys two things. Politically, it means that the NSAs will be the driving force of the India-Pakistan engagement. Those who thought that Doval's political size had been pruned in the wake of handling the Pathankot terror attack will have to eat crow as he continues to be the go-to man for Prime Minister Narendra Modi.

Diplomatically, it means that in whatever way the India-Pakistan engagement moves forward, it will be through the NSA conduit, which essentially means that it will be Doval, not External Affairs Minister Sushma Swaraj who will be calling the shots.

In other words, it means that Modi, who has invested huge political capital in the process, will closely monitor and choreograph the peace process with Pakistan.

This leads us nowhere. After all, hasn't it been the PMO, rather than the MEA, that has been driving the India-Pakistan peace process? So, what difference does it make if the PMO does what it has been doing thus far vis-a-vis Pakistan?

But the manner in which the wires have got entangled and the two nuclear-powered adversaries' current talks are poised leave a lot of room for negotiations at much higher levels.

This is being done at the level of the NSA. In many ways, India's Pakistan policy under Modi is being choreographed by Doval in much the same manner as Doval is driving India's China policy.

The Indian strategy under Modi is to rope in the powerful Pakistan army in the negotiating spectrum. This can be done at the level of General Janjua, a former army commander. The general is the face of the Pakistan army, an extension of the army.

If the two sides have to close ranks and move forward in negotiations, it can't be done at the army chief level for the simple reason that the Pakistani army chief commands much bigger power in Pakistan than his Indian counterpart.

This is an important difference but worth remembering.

That's why the India-Pakistan engagement has moved to the higher orbit when it comes to the question of holding talks at the structured level of the NSAs.

The two South Asian neighbours first need a practical and political solution for resuming a dialogue which can't be done at the level of the foreign secretaries.

When foreign secretaries meet, they do so in a structured manner. Such meetings are invariably bogged down with a lot of paper work and yet it is not sure that the talks will have a greater chance of surviving than a snow flake in an oven.

But the game changes drastically when it is being played at the level of the NSAs. No paper work. No written promises. And yet much higher chances of being successful.

This is precisely the strategy that the Modi government has employed. Let the two NSAs thrash out a plan from where the two foreign secretaries can take it up further.

After all, nothing else has been working in the Pakistan context.

Therefore, await another meeting between the two countries' James Bonds. This meeting will decide the future course of India-Pakistan engagement. 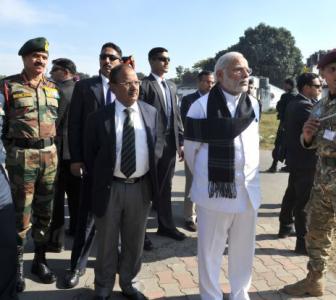 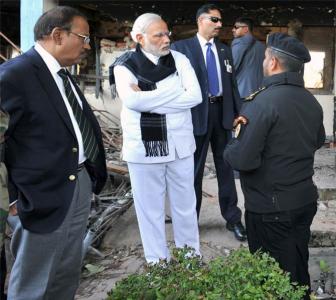 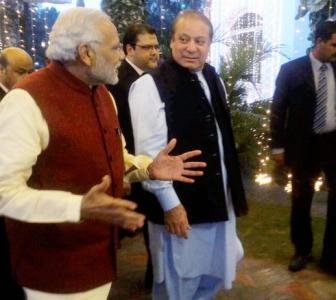