News
Business
Movies
Sports
Cricket
Get Ahead
Money Tips
Shopping
Sign in  |  Create a Rediffmail account
Rediff.com  » News » Ahankar has been many a leader's undoing

'BJP leaders might ponder the all-consuming arrogance that grips the Modi-Shah combine a year ahead of the next general election,' says Sunil Sethi. 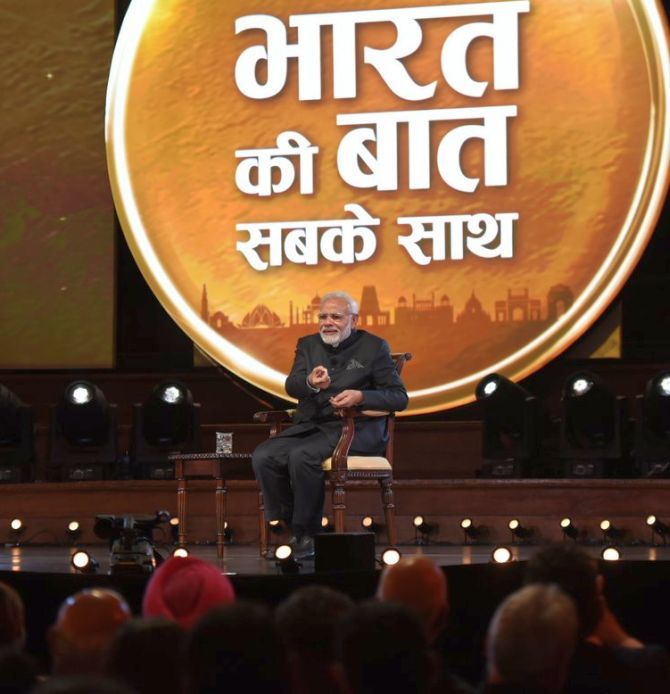 The word 'hubris' in the Oxford English Dictionary is summed up simply as 'excessive pride'. It is the single biggest reason for leaders who exercise unrestrained power to rapidly start losing their shine.

In the controlling, vainglorious, style of managing government and party that he displays, Narendra D Modi is sometimes compared to Indira Gandhi.

In a notorious exhortation in 1976, then Congress party president D K Barooah declared, 'India is Indira and Indira is India.'

Perhaps Mrs Gandhi took his grovelling utterance literally. It was a calamitous period when she had seized absolute power during the Emergency, leading to a humiliating defeat in the election of 1977.

In 1982, as party general secretary, he shouted at then Andhra Pradesh chief minister T Anjaiah at Hyderabad airport, calling him a 'buffoon'. Anjaiah was sacked forthwith.

BJP leaders, including Modi, are known to quote these instances as prime examples of sycophancy that afflicts the country's grand old party and its catholic adherence to dynastic succession.

Instead, they might ponder the all-consuming arrogance that grips the Modi-Shah combine a year ahead of the next general election.

In the wake of the abject reversals in Gorakhpur and Phulpur -- and a series of defeats in other by-elections -- the most commonly posed question today is: Will 2019 be the BJP’s 1977 moment?

In the copious analysis of the shifting caste alliances and SP-BSP gatbandhan that led to the losses in Chief Minister Ajay Singh Bisht -- aka Adityanath -- and his deputy's pocket boroughs in Uttar Pradesh, one BJP MP from western UP was quoted as pinning the blame on the sense of 'ahankar' and 'aham' (arrogance and ego) that prevails in the party cadres.

'Our party rules in 21 states, or in alliances, that govern 70 per cent of the electorate,' the BJP MP continued, 'but avenues to respond to 1,300 MLAs are blocked. The fact is that most BJP legislators feel ignored and unappreciated.'

There is a telling video clip -- it went viral after the BJP's recent election triumph in Tripura -- that demonstrates how party veterans are publicly brushed off. It shows the prime minister greeting a line-up of dignitaries assembled on stage at the chief minister's swearing-in in Agartala.

Among them is the 91-year-old L K Advani. He is bowing, hands folded, in a decorous namaskar, but Mr Modi coolly walks past without acknowledging his greeting.

Among Mr Modi's first actions on taking charge in 2014 was to mothball the likes of Mr Advani as margdarshaks, stopping leaders above the age of 75 from playing active political roles.

But Mr Modi is both the rule-maker and the rule-breaker.

Then what about the 75-plus B S Yeddyurappa, currently projected as the BJP's candidate for chief minister in the upcoming state election in Karnataka?

Mr Modi's disdain for public opinion in media interactions is well established; even more so is the case of Amit Shah.

Except for a bunch of oily cupbearers in the capital who perform at the duo's bidding, access to the PMO is tightly monitored, trips abroad abolished, open press conferences unknown.

The tone of sneering contempt -- You are just secularists who don't count' -- in which Mr Shah insulted the press at a media encounter in the Ashok Hotel not long ago went down badly.

Journalists from Gandhinagar well-acquainted with Mr Modi during his long reign in Gujarat who seek interviews have been told, 'Narendra Modi doesn't belong to Gujarat alone, he now belongs to India.'

Yet in Mr Modi's 'House of Cards' a favoured few can do as they please.

Among them is Smriti Irani, who took charge of the information and broadcasting ministry last year.

Ms Irani, in a hit-and-miss political career, has learnt the art of cultivating the media; less civil is her record with civil servants.

Last year in an unaccountable action she transferred several dozen information officers of the Press Information Bureau, the official interface between the media and ministries. The move caused consternation as some were due for retirement.

No amount of chocolate cake she sent PIB officers after the Budget has had the effect to mollify a resentful staff.

One of the BJP's core traditional constituencies in Delhi has been of middle-class shopkeepers and traders.

Bridling at 15 years of Congress rule and the BJP's national landslide in 2014, it put the Aam Aadmi Party, led by 'Jhadoo King' Arvind Kejriwal, in power.

For some months many of the city's markets have been part-paralysed by a 'sealing drive' to collect fines for using residential floors for commercial use.

The BJP rules the city's municipalities and is the small Opposition in the legislature. Here is the party's chance to alleviate shopkeepers' distress and win back old supporters.

But it is deluded in the belief 'Modi raj' that will deliver them.

Ahankar and aham have been many a great leader's undoing. 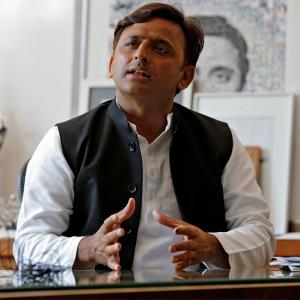