Adivasis: The Indians we forgot

Give the adivasis honour and dignity and the pool of discontent in which the Maoists swim will dry up, writes Nitin Desai

The meticulously planned attack by the Maoists on the CRPF in Dantewada has shocked the Delhi establishment. This episode has come soon after the stopping of the Rajdhani Express near Midnapore and the Maoist gains in Lalgarh. The time has come for the government to explain the adequacy of the security strategy put in place last year and the measures being taken to address the deep-seated grievances about development, natural resource management and governance in the tribal heartland of India.

Five years ago, when the two main Maoist groups, the Peoples War Group (PWG) and the Maoist Communist Centre (MCC), came together to form the CPI-Maoist, I wrote a column in Business Standard that sounded a warning. Not a word in that article would need to be changed if I were writing now. That is the measure of failure of the government's policy on Maoist insurgency.

When the two Maoist groups came together, their immediate aim was to create a Compact Revolutionary Zone (CRZ) -- from Nepal through Bihar in the north to the Dandakaranya region, where Dantewada is located, and Andhra Pradesh in the south. They are not yet there but they have extended their influence eastwards into Bengal and are able to move cadres through this region to escape from or respond to security pressures.

Most of the talk now is about escalating the security effort, including some suggestions about bringing in the air force and the army. Some security analysts have questioned the strategy of establishing territorial control in the affected areas aimed at denying the Maoists the comfort of safe havens where they have people's support. They argue for a search and pursue strategy more specifically directed at the training grounds and assembly points of the Maoist cadres.

I am not competent to comment on the security strategy. What I do believe is that democratic societies should not wage war against their own people. Yes, they have to maintain public order. But when the breakdown of order is due to some serious grievance, the main thrust of the response must be to correct that grievance.

The area for concern is the tribal belt in the eastern part of India that stretches from Bihar and Bengal through to Karnataka. The Maoist presence is not limited to tribal areas, nor is the Maoist agenda limited to tribal uplift. But these remote and forested areas, where they seem to have popular support and protection, provide them with a base that allows them to elude the battalions of police who are chasing them. That is why the grievances that we need to address are those of tribal India.

The development gap between the tribal population and the rest of India can be summarised in the percentage of rural population below the poverty line, which was 47 per cent for STs, 37 per cent for SCs, 27 per cent for OBCs and 16 per cent for others, according to the 2004-05 National Sample Survey. The SCs and OBCs have now acquired the political clout to assert their interests at the national and state level. But the STs are peripheral in the complex dance of coalition politics.

This is not new. When the Constitution of India was being framed, the adivasis (tribals), the original inhabitants of India, were almost forgotten and it was only the eloquent plea of Jaipal Singh Munda that ensured them a place in the Constitution. We remembered then to do the right thing.  But since then the adivasis are the Indians we forgot. It is high time we undo this lapse of memory.

The answer does not lie in throwing money at the problem. What we need to do is to recognise the rights of tribals to their patrimony and to create the space for them to exercise effective political power. The tribal belt in eastern and southern India is actually rich in natural resources and that is part of the problem. Large-scale land alienation to non-tribals, near-criminal exploitation by mining mafias and bureaucratic (and often corrupt) control over forest resources have marginalised and alienated tribals in their homelands.

One positive measure taken in 2006 was the Forest Rights Act. But its implementation leaves a lot to be desired.  As of end February 2010, out of the 27 lakh claims filed, 7.6 lakh have been accepted, 9.3 lakh have been rejected and the rest have still to be decided.  There are also problems about recognising community rights and the linkages with Joint Forest Management.

The rights of the tribals to capture the value of the natural resources in their homelands have never been fully accepted by the rest of us. We displace them in the name of development, compensate them for the loss of their meagre livelihood but fail to accept that they should have a share in the rents that accrue today to mining mafias, forest contractors and corrupt officials.

All this reflects a serious flaw in the way in which we place tribals in our polity. It is almost like we treat them as interlopers or squatters, a bit like the way the mainfest destiny doctrine of the white colonialists in America denied the rights of indigenous people to their land and resources. The adivasis of India have a long history of territorial sovereignty over the areas that they inhabit.  There were independent tribal kingdoms (for instance the Gond Rajas) and a long history of organised tribal revolts (for instance by the Santhals against the British). We need political arrangements (for instance autonomous district councils) that give them effective political power in their home areas.

Adivasis are not quite like the Dalits who are an oppressed part of Hindu society. They were outsiders to Hindu society and often had a relationship of equality with their Hindu neighbours.  In fact, Hindu society recognised this in several ways in its mythology and scriptures. Remember the sage Valmiki, who was a tribal, and the story about Sabari in the Ramayana and Eklavya in the Mahabharata?

What the tribals need is not hand-outs. They need honour and dignity.  Give them this and the pool of discontent in which the Maoists swim will dry up. 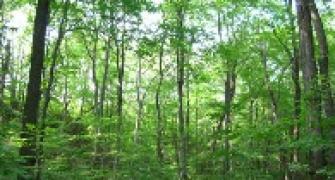 Climate change: What will happen to our forests?

'Pakistan will get a new constitution, almost'