If 25 black men had been executed illegally in the US in one day, the government would have fallen and the population would have rallied to the victims. In India, those of us who did not applaud the police only yawned, says Aakar Patel. This was The New York Times lead story on Wednesday, April 8, about a police officer who shot an unarmed black man in the back.

Many such reports, always concerning single black men, often with a criminal record, being shot by white policemen have anguished the United States and its media in the last few months as many readers will know.

'Watch it! Multiplexes must screen Marathi films at 6 pm'. The Times of India's lead story in Mumbai the same day (in Delhi, Hindustan Times led with 'Diesel vehicles get 10-year limit').

This came after news on Tuesday that police in Andhra Pradesh murdered 20 men, most of them Tamils, for stealing trees. The same day police in Telangana murdered five men who were in their custody, handcuffed and being driven to court.

Neither of these stories was lead-worthy for the editors of India's two largest English papers, and perhaps rightly so.

The truth is that middle class and Anglicised India doesn't care about either blue collar workers (tree choppers) or Muslims (encounter victims) being dealt with outside the framework of the law.

It doesn't concern us, and indeed if we were to read the comments under these stories online -- the encounter did not even make the front pages as a single column in print -- the majority of comments agree with the police's action.

And they are full of hatred for the victims who are judged to have deserved being punished without trial. Even the media reported the stories with extreme prejudice and callousness.

The Indian Express, usually a responsible newspaper, broke the story under the headline '5 SIMI activists shot dead on way to court in Telangana'. The paper's correspondent wrote that 'among the dead is Vikaruddin Ahmed who killed two cops and terrorised them in Hyderabad by targeting them whenever possible.'

It is remarkable that such editorialising, casual assertions and loose language is allowed by a national daily, but this being India, it's not only possible but the norm.

The police told The Indian Express that 'Vikaruddin and his associates continuously incited the armed escort by spitting at them, taunting and abusing them as soon as they started from Warangal. The four others dead are Mohammed Zakir, Sayed Hashmat, Izhar Khan and Sulaiman. They all have several aliases.'

The report then said that Vikaruddin was 'a former SIMI activist and member of the radical social outfit Darsgah Jehad O Shahadat (DJS) Vikaruddin made some daring attacks on police pickets on the anniversaries of the Babri Masjid and Mecca Masjid blast. In December 2008, he opened fire and injured three policemen manning a picket near Santoshinagar. On May 18, 2009, he shot dead a Home Guard while on May 14, 2010, he shot dead a constable at Shah Ali Banda.'

Had he been found guilty by a judge for these? Probably not, since he was attending court as an undertrial, but that didn't stop the newspaper from concluding that he had done it.

The demonisation continued: 'Vikaruddin had started a fringe fundamentalist organisation calling itself Tehreek Galba E Islam that has ties with DJS. Police had announced a reward of Rs 5 lakhs for any information on him. He was arrested in July 2010 from the house Dr Mohammad Hanif, a sympathiser. Based on information given by him, his brother Sulaiman and three others, who belonged to his organisation and helped him in his operations, were arrested.'

If 25 black men had been executed illegally in the US in one day, the government would have fallen and the population would have rallied to the victims.

In India, those of us who did not applaud the police only yawned.

The media has long bowed to its readership/viewership and accepted a certain level of police abuse, so long as it doesn't concern our target group of readers or viewers.

On Tuesday night, middle class hero Arnab Goswami's show on Times Now discussed the politics of the beef ban, and indulged in the usual scaremongering over 'terrorism' (Muslim).

When I was editor of a newspaper in Mumbai 20 years ago, the encounter culture had just come to our cities, from Punjab and the Northeast, where such killing is now actually lawful.

There are more Indians who support that law and its critics are seen on television debates automatically as traitors.

Mumbai's police killed off the gangs who were surviving through extortion of builders and Bollywood producers and financiers. Those newspaper editors who chose to question the illegal police action came under attack from the management and from readers.

The belief was that, given the failure of the State to enforce law, through convictions, it was all right for the government to enforce order, through eradicating criminals without due process.

This produced those cowardly police officers, each with dozens of 'kills' to their name, who were glorified as encounter specialists, decorated and on whom movies were made.

Their act of bravery being to open fire at handcuffed men. At that time I thought that this would end at some point, but, of course, I was wrong.

With the public's focus elsewhere, the State is free to brutalise the citizen and to demonise and dehumanise people though the media after criminally executing them.

Image: Police personnel after the 'encounter' with 'smugglers' in the Seshachalam forest in Andhra Pradesh's Chittoor district on Tuesday, April 7. Photograph: PTI Photo. 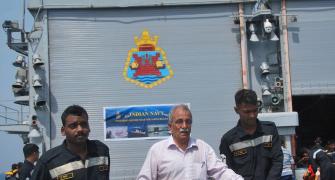 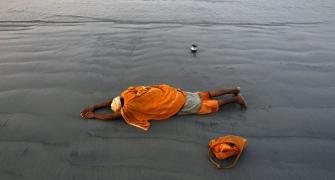 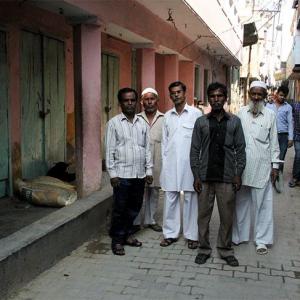 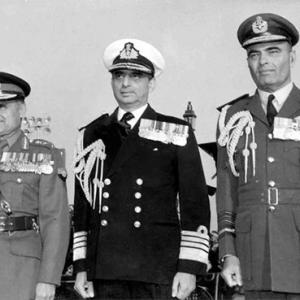