'No one really knows whether it is somehow better to go raging and fighting into the dark night, or close one's eyes quietly and give in to fate.'
'But a funeral with music, tinsel and acceptance -- not unlike most New Year festivities -- seems like a better send-off than any other,' says Geetanjali Krishna.
Illustration: Uttam Ghosh/Rediff.com 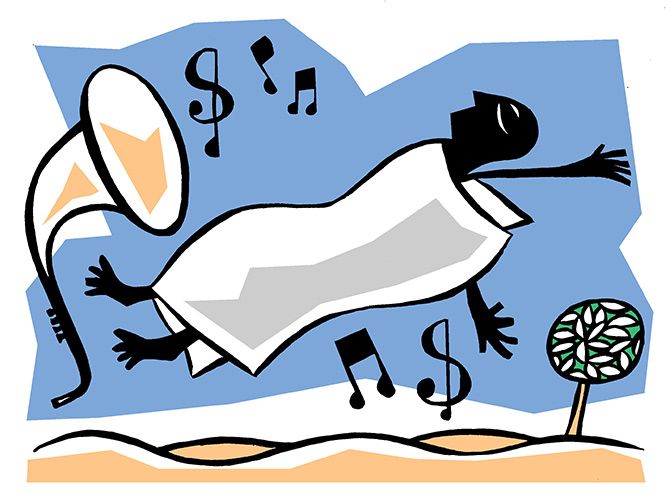 As 2017 drew to a close, social media recapped the year -- and people -- gone by. As I read about Shashi Kapoor, Tom Alter, Glen Campbell, Hugh Hefner and others who passed away last year, I am struck by how medical our reporting (and understanding) of death has become.

It is almost as if it weren't for cardiac arrest, cancer, or stroke, people would not die at all.

Modern medicine has somehow made us all think of death as being, in some way, a failure to survive, rather than an inevitable reality.

So amid reports of famous personalities who lost 'heroic battles' against a host of maladies, I find my mind straying to Rakesh Kumar's father, a small farmer in a small village in Madhya Pradesh.

When he died in early December at the ripe old age of 85 while visiting his son in Delhi, his funeral had the neighbours agog.

Kumar and his brothers had decorated his bier with streamers and tinsel, and hired a band to lead the funeral procession.

"Our neighbours here -- all migrants from across the country -- had never experienced a funeral like this, as you can imagine," said Kumar, who, as the eldest son, performed all the rituals and ceremonies.

They thought it was strange for a death to be celebrated in this fashion. But Kumar's family, who came to Delhi to pay their last respects to the departed soul, had a different take on this.

"When someone dies of natural causes in our family, we think of that person having completed his time on earth, as we all will someday," said he. "And especially when an old person who has discharged all his earthly duties dies, we believe that celebrations rather than mourning are in order."

Much to the mystification of the neighbours, used to more conventional funerary practices, Kumar and his family were melancholy, but not overtly so.

"We would all sit together till late at night, reminiscing about the old days, singing old songs and our neighbours commented that ours didn't seem like a house where a death had taken place," he said.

Kumar's philosophy did seem unusual, I commented. In his family, he rebutted, death, especially in old age, was accepted as a natural and inevitable part of life.

Perhaps till not so long ago, mortality rates were much higher than they are now, I said, so natural death due to old age was considered (and celebrated) as an achievement.

He rubbished this conjecture as well. "Nobody can escape death, even if he has access to the world's best medical facilities," said he.

"What's the use of crying over something that can't be avoided?" Kumar told me that many neighbours were also surprised when he said he hadn't found out the eventual cause of his father's death.

"We had taken him to hospital because he had developed fever and wasn't eating," he said. "Eventually, he died because his time had come -- the actual medical causes didn't really matter to us."

Consequently, today, although Kumar and his family are grieving the loss of their patriarch, their stoic acceptance of his death seems far removed from the battle modern science is waging against mortality.

No one really knows whether it is somehow better to go raging and fighting into the dark night, or close one's eyes quietly and give in to fate.

But a funeral with music, tinsel and acceptance -- not unlike the tempus fugit undertone of most New Year festivities -- seems like a better send-off than any other. 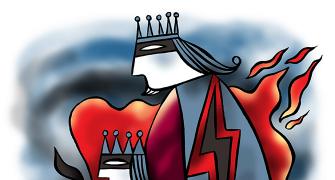 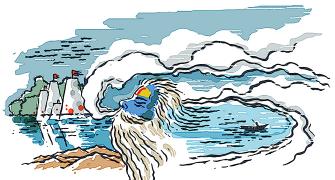 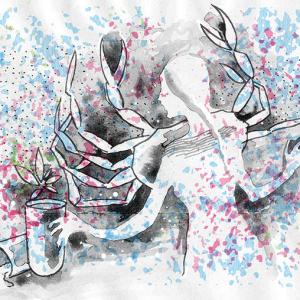 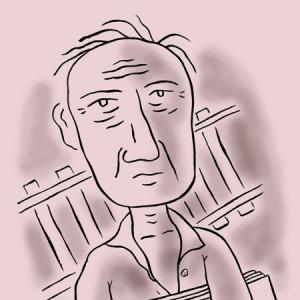