News
Business
Movies
Sports
Cricket
Get Ahead
Money Tips
Shopping
Sign in  |  Create a Rediffmail account
Rediff.com  » News » A handshake that made history

The Korean summit, laden with symbolism in everything from the choice of location to the mango mousse for dessert, could just be the first round in a continuing dialogue, says Dr Rajaram Panda. 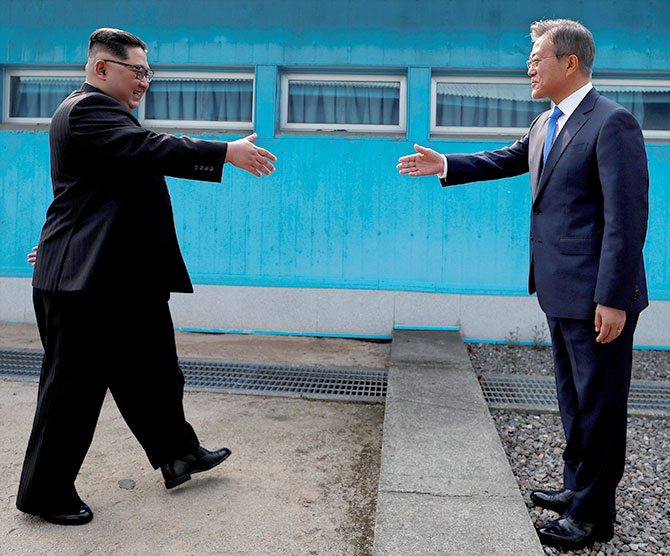 What looked unthinkable a few months back happened in the Korean peninsula on April 27, 2018, after a period of tensions when the spectre of a major conflict assuming global dimensions loomed large following the bellicose exchange of statements between US President Donald Trump and North Korean leader Kim Jong-un.

The unthinkable was when Kim Jong-un became the first leader from the reclusive nation to set foot in the rival country since the 1950-53 Korean war, for a summit meeting with his South Korean counterpart Moon Jae-in.

In 2017, the prospect of conflict rose to an alarming height not seen in decades after North unleashed a spate of missile tests, conducted its most powerful nuclear test and traded threats and barbs with the United States.

Both Moon and Kim rewrote history when they came face-to-face on the southern side of the 38th Parallel Demilitarised Zone of Panmunjom. This historic meeting could not have come at a more critical time.

By doing so, both buried their 65-year old hatchet. Both agreed to finally end a seven-decade war in 2018, and pursue the “complete denuclearisation” of the Korean peninsula. The embrace following the signing of the deal spoke a lot of the bonhomie both leaders share. They announced plans to formally declare a resolution to a war and replace the 1953 armistice that ended open hostilities into a peace treaty by the end of 2018.

In his first remarks since taking over in 2011, Kim remarked, “We have agreed to share a firm determination to open a new era in which all Korean people enjoy prosperity and happiness on a peaceful land without wars”. The two sides “confirmed the common goal of realising, through complete denuclearization, a nuclear-free Korean peninsula”.

After arriving at the Peace village, Kim signed a guest book and wrote, ‘A new history begins now -- at the starting point of history and the era of peace’. Kim also told Moon he was willing to visit him at the presidential Blue House in Seoul “any time” if invited, to which Moon, while welcoming him, is believed to have promised to offer a bigger guard of honour than what was accorded at the Peace House.

As it transpired, it was a handshake that made history. After greeting each other, both walked hand in hand into South Korea for the opening act of a meeting between the two countries still technically at war. The summit, laden with symbolism in everything from the choice of location to the mango mousse for dessert, could just be the first round in a continuing dialogue and is a precursor to the expected meeting between Trump and Kim some time in late May or early June.

According to the statement, called the Panmunjom Declaration, ‘South and North Korea agreed to actively seek the support and cooperation of the international community for the denuclearisation of the Korean peninsula’ but it did not elaborate on what that would entail. The commitment to ‘complete denuclearisation’ is ambiguous and subject to different interpretations. It can be interpreted as North Korea getting rid of all warheads, or North Korean demands on the US military in South Korea.

Kim is not one to reveal all his cards at once. He may have responded to Moon’s peace overtures, proposed the summit and talked about denuclearisation. But the spirit of his forthcoming summit with Trump need not necessarily be the same as that with Moon.

If one reads carefully the statement issued by Kim’s official Korean Central News Agency, it urged the US to respond “with sincerity”. It observed: ‘What is needed for the US is to learn how to observe good manners and how to respect the party concerned, not resorting to high-handed practices and arrogance.’

The bigger question that remains to be answered is, was the summit different from the earlier ones? In their two previous summits in 2000 and 2007, the two Koreas had agreed to denuclearise the peninsula and establish permanent peace. It transpires that much of this agreement mirrors the deals between North Korea and Moon’s liberal predecessors, which appeared to restore cooperation that had deteriorated over the past decade.

The interesting part was both Moon and Kim announced holding of military talks in May and seek a “phased disarmament”, without providing more details. It remains unclear if the commitment will lead to lasting change as previous agreements collapsed over inspections, weapon tests and disputes over economic aid.

This time round, Kim’s summit with Trump could face a major roadblock as the former is already on the cusp of developing a missile capable of delivering one of his estimated 60 nuclear bombs to any city in the US, the reason why Trump has threatened war.

In the tightly scripted inter-Korean summit, Seoul focused more on denuclearisation, establishing permanent peace on the peninsula to create the right environment for the highly anticipated encounter between Kim and Trump in May or June, the date and venue of which are yet to be determined.

While Washington hoped the Moon-Kim summit would “achieve progress toward a future of peace”, Tokyo hoped the constructive discussions at the historic summit would lead to resolving various challenges, “such as abductions (of Japanese citizens), and nuclear and missile (development)”. For Japan’s Prime Minister Abe Shinzo, addressing past abduction of Japanese nationals is a top priority, besides of course denuclearisation.

The summit came after a sudden and spectacular diplomatic flourish orchestrated by Moon, after Pyongyang had conducted its sixth and most powerful blast in 2017, as well as launched more than 20 missiles, including two longer-range weapons that flew over Japan and another that experts say puts the whole of the US within striking distance.

Emboldened by such success and confidence drawn from weapons advancement, Kim extended an olive branch to the South in his New Year address, an opening that Moon seized in a bid to ease soaring tensions on the peninsula. The April 27 summit is just the third of its kind, the last being held more than a decade ago in Pyongyang.

The previous summits, held during a period of rapprochement, were followed by a decade of tense and cold relations. The precursor to the thaw preceding the April 27 summit, was the participation of North Korean athletes and cheer-leaders at the Pyeongchang Winter Olympics hosted by South Korea in February 2018.

Much of the credit ought to go to Moon for facilitating this. Athletes from both the Koreas marched under a common unification flag at the opening ceremony, the significance of which cannot be overlooked. The North Korean leader even sent his sister, the first from the Kim family to set foot on South Korean soil, to represent her brother, the impact of which was huge.

The first inter-Korean summit took place between former North Korean leader Kim Jong Il, the late father of Kim Jong-un, and the liberal former president of South Korea, Kim Dae-jung. The three-day meeting in June 2000, which began with a smiling Kim Jong Il tightly grabbing the hands of Kim Dae-jung at Pyongyang airport, led to an agreement between the Koreas on joint economic projects, which has been since stalled. Both leaders also agreed to resume reunions of families divided between North and South. Kim Dae-jung won the Nobel Peace Prize in 2000 for his rapprochement policies with the North.

The second Koreas summit took place in October 2007 between Kim Jung Il and Roh Moo-hyun, Kim Dae-jung’s liberal successor and the political mentor of President Moon. Roh went to Pyongyang after crossing the DMZ in a symbolic moment that grabbed international headlines. Kim and Roh agreed to pursue a peace treaty to formally end the Korean war and reached a set of cooperation projects. But most of the accords were shelved after Roh’s five-year term ended months later and he was later replaced by a conservative who took a harder line over the North’s nuclear ambitions.

The third inter-Korean summit on April 27 was thanks to Moon’s quick response to Kim’s peace overtures. During the Pyeongchang Winter Olympics, Kim’s sister conveyed her brother’s desire for a summit, and South Korean envoys brokered a potential meeting between Kim and Trump in Washington.

What could be the fallout of this historic summit? It is too early to hazard any firm, conclusive post-summit outcome. In July 2017, about two months after taking office, Moon had unveiled his so-called Berlin declaration during a visit to the German capital, according to which he pledged to pursue the North’s denuclearisation with a security guarantee and economic and diplomatic incentives while also seeking a peace treaty.

The question that arises now is, will Moon be able to sell this idea to Kim? Of course, Trump shall give his “blessing” if such an arrangement works out. Some clarity will emerge when Trump and Moon meet.

There is yet another technical issue which attracts different interpretations. South Korea and a US-led UN force are technically still at war with North Korea. Because South Korea is not a signatory to the 1953 armistice, it is not possible for the two Koreas to announce an end to it, though both can announce their intention to end the war and work toward a peace agreement and pursue discussions with the involved countries, such as the US.

Such an approach could be dramatically different from the previous two summits which primarily dealt with bilateral economic and cultural projects. That North Korea announced a moratorium on nuclear tests and intercontinental ballistic missile launches as well as the closure of its main atomic test site ahead of the summit was itself a huge concession.

All stakeholders welcomed such a gesture by Pyongyang as they perceive this as a precursor to the ultimate goal of achieving denuclearisation. It is a different matter that Trump boasted that such a concession by Kim was because of the pressure put by him. Trump also claimed that it was because of his pressure that Kim decided to make a secret visit to Beijing for a tee-e-tee with Chinese President Xi Jinping. He further claimed that his diplomatic push also prompted talks between Kim and Abe and other world leaders.

Trump overlooks the fact that in his re-setting of America’s policy towards East Asia, he has upset many established norms and created plenty of uncertainties, including the diminution of trust by allies on US guarantee. In particular, Japan feels sidelined as it is not consulted either by the US or South Korea in their outreach towards North Korea.

Apart from concerns on the security front, Abe is worried that both Moon and Trump might not be relied upon to raise the issue of abductions of Japanese citizens in the 1970s and 1980s by North Korean agents, which is why he sent top diplomats to Seoul to sound out Moon prior to the summit. Abe is also planning to send Foreign Minister Taro Kono to Washington to speak with Trump on this prior to his summit with Kim.

It is too early to assess what long-term objectives Kim has in mind. Temperamental leaders like him and Trump could come up with something completely unexpected. If the initial signs of a thaw are to be believed in spirit and intentions, then the Korean summit is a welcome development.

Assuming the Trump-Kim summit also shows a positive outcome, that should also be welcome.

But the bigger issue of reunification would still remain. Further developments could be a pointer to how this bigger task could be addressed. For the time being, it is good to rejoice over the positive trend that the Moon-Kim summit has presented before us. 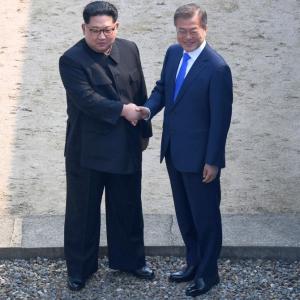 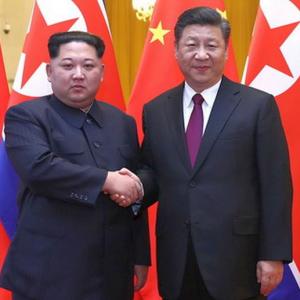