News
Business
Movies
Sports
Cricket
Get Ahead
Money Tips
Shopping
Sign in  |  Create a Rediffmail account
Rediff.com  » News » US refuses to budge on Khobragade case: 'There's been no goof up'

US refuses to budge on Khobragade case: 'There's been no goof up' 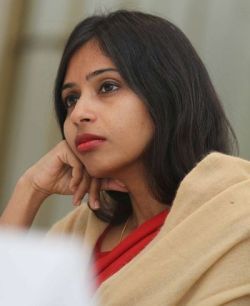 The United States has once again asserted that there has been "no goof up" in proceeding with the case against Indian diplomat Devyani Khobragade.

The US has rejected India's contention that it has misconstrued salary details in the visa application of Khobragade's domestic help.

Making it clear that the charges against Khobragade will not be dropped, US sources said, "The strength of the fraud in the case is very strong."

"The case will not be dropped. The charges will remain," sources said, adding that if the 39-year-old diplomat gets full diplomatic immunity, she can travel outside the country.

But if she returns to the US later without immunity, she could face arrest on the charges against her and be prosecuted.

On the allegation made by Khobargade's lawyer -- that the $4,500 amount written in the visa application was Khobragade's salary and not the amount promised to be paid to the domestic worker Sangeeta Richard -- sources said that Khobragade did not understand the form correctly.

"No federal agent goofed up in reading the form," sources said, rubbishing allegations made by Khobragade's lawyer Dan Arshack.

"It is clear that the salary details required on the visa application form are that of the employee and not the employer," they said.

There is no question of apologising to India over the arrest of Khobragade, the then deputy consul general of India, they said.

Khobragade was later released on a $250,000 bond after pleading not guilty in court.

The Indian government has demanded withdrawal of the case and an apology for the treatment meted out to the diplomat.

Sources also added that Khobragade's domestic help Sangeeta's family was taken to the US because the Justice Department was compelled to make sure that victims, witnesses and their families were safe and secure while the caseswere pending.

If Khobragade had immunity in the case, why was she transferred from the Indian Consulate to the Indian mission at the United Nations, the sources contended.

India has informed the US that Khobragade has been accredited to the UN as a member of the country's delegation to the General Assembly before her arrest.

Since the diplomat was part of the Indian delegation to the UN since September and enjoyed full diplomatic immunity, her arrest would be a violation of the Vienna Convention.

The US has made it clear that it is proceeding with the prosecution of Khobragade.

US sources said on Tuesday that more evidence was being gathered against the diplomat before the charge-sheet is filed by January 13.

They said US laws were being followed in the case and everything has been "done by the book."

Sources have stressed that it is better if the case is resolved. Even if Khobragade avoids prosecution due to immunity, the case will remain pending in the US federal court.

But Khobragade would not be considered a fugitive from American law.

Following her arrest, India has withdrawn the extra privileges enjoyed by American Ambassador Nancy Powell and other diplomats, such as special access at Indian airports.

India also initiated a slew of other measures -- like stopping import clearances for the US embassy -- and asked all American Consulate personnel and their families to turn in their ID cards.

In the wake of the furore and indignation triggered by the case in India, Indian-American Attorney Preet Bharara issued a lengthy statement, in which he defended the arrest and the charges against Khobragade.

Meanwhile, the sources said Khobragade's lawyer can certainly ask the court to dismiss the case but that request can be challenged by the prosecutors.

Amid the furore created by the case, the fact that Khobragade misrepresented and made false statements to the US authorities is being lost, they said.

The complaint against Khobragade alleges that after an employment contract was submitted to the US State Department, Khobragade told her domestic worker Sangeeta that she needed to sign another employment contract, which provided that her maximum salary per month including overtime allowance will not exceed 30,000 rupees per month.

Devyani accredited to the UN before arrest: India tells US