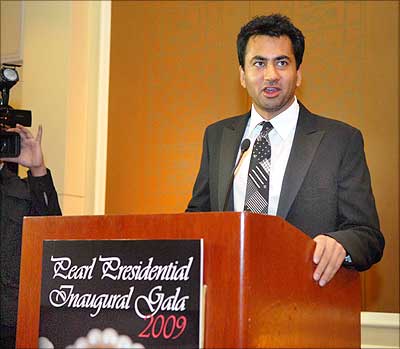 Popular Indian-American actor Kalpen Suresh Modi alias Kal Penn, 31, who was a surrogate for the Obama [Images] campaign, and was among an all-star cast of speakers and entertainers  at the 'We Are One' concert to launch the inaugural celebration at the Lincoln Memorial in Washington, DC on January 18, said, it was an emotional and humbling experience.

In an exclusive interview with rediff.com, Penn said, "It was a very humbling experience to have that sort of a set-up and to see so many people who have come out for something that symbolises unifying the country."

"It was at the Lincoln Memorial-such a historic site-and the symbolism was palpable," he added.

Penn said, "I obviously remembered our family history - being part of the Independence movement in India and how my grandparents were jailed and the struggles they had. So, this experience was not cerebral. It really was an emotional experience for all the speakers."

Penn, among the few South Asian Americans authorised to speak on behalf of the Obama campaign, said: "All of the folks who got involved, all the folks who donated, held events at their homes or their businesses, now's the time that we really need to step it up and make sure that we do the community outreach that our community programs are coming together with-the White House Service initiatives. And, so, really, it's a ground-breaking unique time and I am so excited and I am looking forward to all the changes."

Those who were part of the extravaganza included Bruce Springsteen, Stevie Wonder, Bono, Garth Brooks, Denzel Washington, U2, Beyonce, John Mellencamp, Shakira [Images], Usher, James Taylor, and Queen Latifah. Obama, his wife Michelle, Vice president-elect Joseph Biden Jr, his wife Jill and their families sat to the side of the stage behind a screen of protective glass.

In the interview, Penn, asked if he would remain involved with the Obama team or go back to acting, said, "I would love to remain involved in public service, (but) obviously, I am on a TV show now and so I am going back to LA (Los Angeles) on Thursday to continue shooting. But, this is now the beginning of something and everyone's got to do their part-whether we are actors, doctors, businessmen, teachers, whatever it is."

"Everyone's hopefully going to do their small part and so it's exciting to be part of this whole continuing movement," he added.

Penn is best known as the co-star of the hilarious comedy series 'Harold and Kumar' that have become a cult favorite with fans worldwide. He also starred in Mira Nair's 'The Namesake,' and has also appeared in the popular 'Law and Order,' series on television.

Currently, he appears on the TV show called 'House' that shoots in California.