The Sachar Committee on the status of Muslims, you're told, is not asking for quotas but is asking for more education -- one of the report's annexure tables shows there were 147 representations to it that asked for more education versus 57 for reservations. This, however, is just clever packaging since the report asks for reservations very subtly (link UGC grants to "diversity", have an equal opportunities commission, an online databank on the status of each community, its access to various types of jobs, bank credit, and so on). It even talks of the Kerala/Karnataka/Tamil Nadu models, where the majority of the Muslim population is covered by the OBC tag, reservations for whom Dr Manmohan Singh and his colleagues are batting for so solidly!

The report doesn't ask for separate electorates for Muslims but talks of formulating and implementing nomination procedures to increase what it calls "corresponding representation in government structures" and "other methods to enhance political participation of the community". The report has, also, a sample list of some assembly constituencies reserved for Scheduled Castes and argues that since the population of Muslims in these constituencies is greater than the SC population, reserving them for SCs denies Muslims the chance of getting elected to democratic institutions.

Imagine the furore if the government dereserves such constituencies. Good luck to Dr Singh as he tries to get off this new tiger he set upon the country -- if he can't, the Hindu vote bank is all set to consolidate in favour of the BJP.

What's most interesting about the report is the manner in which it seeks to blow up all the perceived inequities -- even if you haven't read the report, the stories leaked to the media give a clear enough picture.

Muslims are not represented enough in the civil services, in banks, in PSUs, in the judiciary, in the national security agencies (thanks to the furore in the media, Sachar wasn't allowed to get data for the armed forces), the list is a long one. The problem with all such data, however, is that you need to "normalise" it for any meaningful conclusions to be made. Sachar does this only partially.

The other constant refrain is that Muslims do badly because the villages where their population share is higher have poor education and other public facilities -- "there is a clear and significant inverse association between the proportion of the Muslim population and the availability of educational infrastructure in small villages". What the report doesn't highlight, however, is that when it comes to medium- and large-sized villages, there is virtually no change in the amount of educational facilities for villages where the share of Muslim population rises (in any case, the fact that national-level Muslim enrolment rates are comparable with others should put this myth to rest).

Ironically, the small villages where this sharp reduction takes place are primarily in West Bengal, Uttar Pradesh and Bihar, the states where the political class champions the cause of the Muslims! The lesson is clear: those who want to hold back the Muslims are those that advocate special relief/packages for them. 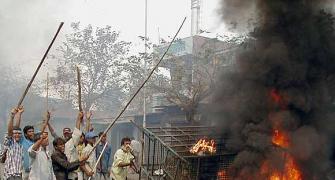