'He was the only new face in a sea of superstars and slowly talk started in the unit that perhaps Ramesh had made a mistake by casting him.'

As Bollywood's beloved classic turns 40, we revisit this fascinating excerpt from Anupama Chopra's Sholay, The Making of a Classic, on how a great actor got a great role in a great film. 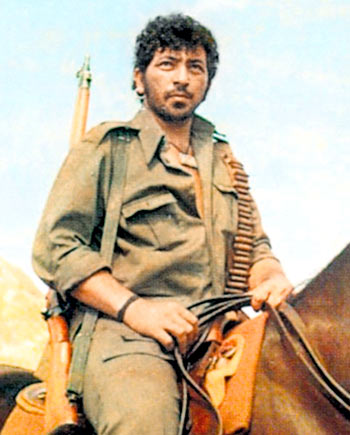 He was not a particularly large man, but his lumbering gait, thickset face and curly hair gave him the appearance of one.

Director Ramesh Sippy was lying on the diwan with his back to the door.

From the low angle, Amjad loomed larger. Something clicked. 'He had an interesting face,' says Ramesh. 'I felt very positive.'

Panic had set in after Danny's departure.

Shooting was less than a month away. And Gabbar Singh was no ordinary character. It was a pivotal role.

The actor had to have both talent and charisma to hold his own against the galaxy of stars. Bad casting could destroy the film.

Amjad was the younger son of character artiste Jayant.

His home production, Patthar ke Sanam, which was supposed to launch him, was announced, but never made.

He had assisted K Asif on Love and God and also done a bit role in the film. The credentials were hardly impressive. But in theatre Amjad had a strong reputation.

A few days after Danny left, Salim bumped into Amjad.

Salim knew Amjad's father, and had been visiting their home since Amjad was a little boy.

A polite conversation ensued in which Salim asked Amjad about work. There wasn't much, just bit roles and theatre.

Salim had heard about Amjad's skills as an actor, and physically he seemed to fit the role.

'I can't promise you anything,' he told Amjad, 'but there is a role in a big film. I'll take you to the director. Agar aap ko yeh role mil jaaye, aap ki koshish se ya aapki kismat se (If you get this role, whether by luck or effort), I tell you, it is the finest role in this film.'

Amjad seemed to fit the part, but he was unknown.

Could he carry the film?

He was asked to grow a beard and come back. Meanwhile, Ramesh and Salim-Javed pondered. Salim-Javed were convinced that Amjad was the right choice.

A screen test was done.

They shot pictures in the office garden. Amjad had grown a beard and blackened his teeth.

His diction was right, his language was perfect. He was confirmed for the role.

Amjad hurried ecstatically to hospital to break the news to wife Shaila. The date was September 20, 1973.

His son Shadaab was born that afternoon.

Normal life took a back seat.

He marked out the pages on the real-life Gabbar, insisting that Shaila read it too.

He rehearsed his lines and fleshed out his character.

He remembered a dhobi from his childhood who used to call out to his wife: 'Arre o Shanti.' The lilt in Gabbar's 'Arre o Sambha' came from this dhobi.

The morning Amjad was to leave for Bangalore, he put the Quran on his head and prayed.

Shaila was surprised. Amjad was a spiritual person, but he rarely prayed.

As abruptly as he had started, he stopped. He placed the holy book back in its place, 'I think I'll be able to do it,' and drove to the airport.

There was a hydraulic failure, and the pilot was forced to keep circling over Mumbai. After dumping fuel, the plane landed back in Mumbai.

Amjad sat at the airport, but didn't call home. After five hours, it was announced that the technical fault had been fixed and the plane was ready for take off.

Not many passengers had the stomach to get on that plane again. Amjad was among the four or five who finally flew on it.

He had to reach Bangalore. Through the flight, he wasn't thinking about his wife or his son. His only terror was: 'If this plane crashes, Danny gets Gabbar.'

Gabbar Singh was not having a good day.

It was Amjad's first day of shooting. They were starting with the scene in which he is introduced.

His first line was, 'Kitne aadmi the?' All his life had led to this moment.

The years of theatre rehearsals, knocking on doors for acting jobs, sweating it out as an assistant -- the Gabbar role had made all that seem worthwhile.

His army fatigues, picked up from Mumbai's Chor Bazaar, had the right weathered look.

His teeth were blackened. His face was appropriately grimy. He had lived the part for the last few months. But now, when it was time to deliver, he just could not get it right.

Gabbar had to mince tambaku (tobacco) as he talked.

The motion of one hand grinding against another added to his menace. It was supposed to be his habit.

But Amjad could not make it look casual. He would grind the tobacco, speak a few lines, look around awkwardly and then return to grinding.

He was nervous and it showed; his hands were stiff, his movements seemed rehearsed, and his dialogue delivery was shaky.

There was nothing natural about his performances; Gabbar was a stranger to Amjad.

Ramesh kept talking to him, trying to help him get his lines right. They struggled for two days.

After 40-odd takes, both Ramesh and cameraman Dwarka Divecha decided the actor needed a break.

Divecha told Amjad to keep his costume on and just sit on the sets. 'Tu apne aap ko season kar de (Season yourself).'

His father was in hospital fighting cancer. His son was only a month old. His family's hopes were pinned on this film. 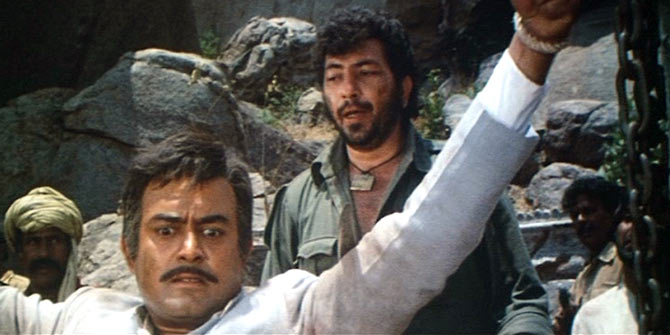 IMAGE: The Thakur and Gabbar...

For the rest of the schedule, Amjad lived in the fatigues, trying to become Gabbar.

He wrote often to his wife, but never shared with her the extent of his trauma. All he wrote was: 'I'm very impatient, I don't know, I hope I can do it.'

Since he didn't drink, he would spend the evenings nursing endless cups of tea. Through the entire schedule, he didn't do a single shot.

In the next schedule, Amjad was more prepared.

He got it right in the first few takes. He was living his character, and would stay in costume even when he was not shooting.

But some members of the unit, unable to forget his earlier awkwardness, didn't seem to think this was enough.

Besides, Amjad was the only new face in a sea of superstars and slowly talk started in the unit that perhaps Ramesh had made a mistake.

The murmurs grew, till it became impossible even for Salim and Javed, who had been the most keen to have Amjad as Gabbar, to ignore them.

Anxious, perhaps, to not be seen as people responsible for ruining the film, they spoke to Ramesh.

'If you aren't satisfied with Amjad, change him,' they said.

For a few days the unit was rocked by rumours that Amjad was getting the boot. But Ramesh finally put his foot down. Only Amjad would play Gabbar.

Amjad found out about the rumours much later.

But the incident sowed the seeds of misunderstanding between him and Salim-Javed.

He could not understand why two people, who had ardently recommended him for the role, had then tried to get him thrown out. He saw it as a move to sabotage his career.

The hurt stayed with him till his death. Salim-Javed gave birth to the Amjad myth, but they never worked with him again.

Excerpted from Sholay, The Making of a Classic, by Anupama Chopra, Penguin India, 2001, Rs 295, with the publisher's permission. First published on Rediff.com on February 7, 2001. 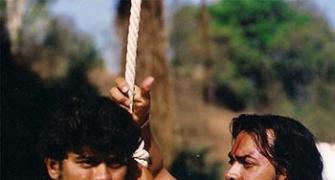 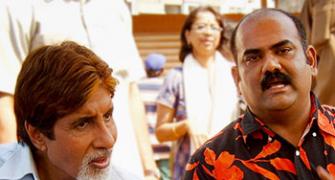 'I didn't even know there was another ending to Sholay'