News
Business
Movies
Sports
Cricket
Get Ahead
Money Tips
Shopping
Sign in  |  Create a Rediffmail account
Rediff.com  » Movies » There Is A Happy Land Where Only Bowie Plays

'It is impossible to pin down the genius of David Bowie, to distill any kind of essence of that singer-songwriter-visionary-buccaneer-icon into a line or several.'

Raja Sen salutes the one and only David Bowie. 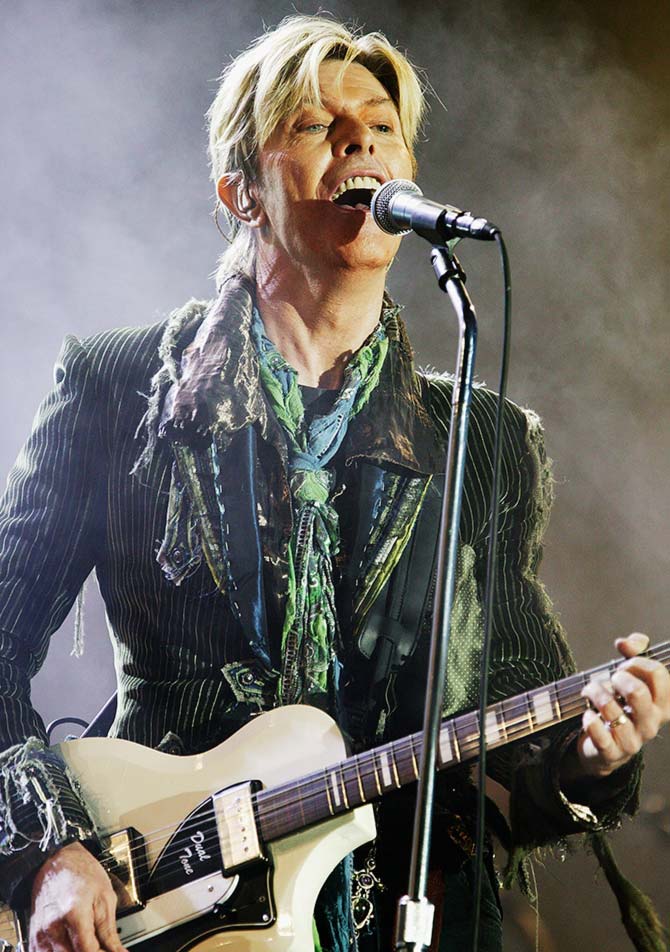 I fell in love with David Bowie before I knew him.

I loved his words before I knew they were his. I could never bring myself to like Nirvana, but being born in the early 80s meant it was impossible to escape any of Cobain's self-conscious grunge stylings. And lo and behold, here was a Nirvana song that was actually stunningly written, called The Man Who Sold The World.

If Kurt Cobain can write that, I remember thinking, awestruck -- particularly blown away by the preposterously well-phrased idea of a man who 'gazed a gazeless stare' -- then surely he must be something special. He was something special, certainly, but he also wasn't Cobain.

Over the next decade, I was intrigued by Bowie, but not enough to dive in. My appetite for intelligent rock was sated by the staggering genius of Frank Zappa, and I hadn't been intrigued enough to shadow the man in terrific trousers, two-toned eyes and hair gone wild. Yet.

This all changed with a live version of a song I first thought was by Divine Comedy. I was at university when I developed an affinity for the literature-referencing Irish band, and one day I heard them play a song about 'a godawful small affair.'

I loved, loved, loved Life On Mars. Those words, those glorious words, that precariously soaring melody, that idea. It felt like nothing else had, potent and powerful and overwhelmingly new, a song made ten years before I was born sounding freshly minted, as if written not merely in the now, but for me, for young me to feast on and grow with.

Now Bowie had beckoned twice -- through stare and affair -- and the lure was too strong. And why in the world would anybody want to resist David Bowie?

This was as much science fiction as it was musical theatre. It is impossible to pin down the genius of David Bowie, to distill any kind of essence of that singer-songwriter-visionary-buccaneer-icon into a line or several, but here's my naive attempt: He always gave us what we didn't know we wanted.

Every single time, there was surprise, there was revolution, there were (ch-ch-ch-)changes and there was (rebel-)rebellion. He thrived on thwarting expectations and yet -- quite shockingly for a man who always seemed infinitely wiser, infinitely cleverer than us -- he lived to delight us. To make us feel, to make us fly, to make us love.

Yes, love. Make no mistake, there is so much that courses through his songs, his words, his falsettos: Rage and politics and shadows and ambiguity and angst and nihilism and despair and narcissism and, yep, amphetamines.

Yet unlike so many of our sharpest thinkers, Bowie allows for both discourse and discos. For all his unforgiving starkness, he's a dancer, he's a dreamer, he's a romantic.

Just look into those blue-green eyes and suddenly the night is lit not just by moonlight, but serious moonlight.

Listening to a great Bowie song for the first time... actually, scratch that. The minute you realise why any one Bowie song is great, no matter when you're hearing it, that bloody moment when it all clicks into place, that moment after which the song is not just his but yours forever, that moment feels like falling in love.

'Like so many of us, I never saw him perform live, I never looked into his eyes, I never shook his hand, I could never tell him what his music meant to me. (What, though, could I -- or any of us -- have said? What could possibly have sufficed? Adjectives would have to be invented to tell him what he meant to us. Possibly by him.)'

It's heady and marvellous and unique and unforgettable, which is why -- as I discovered a couple of nights ago, sitting with a devastated fellow Bowie-maniac -- you can't have a David Bowie top 5 or top 10. We've fallen in love with his songs too many times to try and pick favourites. Space Oddity is as hauntingly perfect as a song can be; My phone is named Aladdin Sen. How do I choose? It's all love.

The genius is there for us all to see, to marvel at, to learn from: The soundscapes covered in moon-dust; the vocals that leap from sneering to soft to seductive, from velvety to violent; the devastating arrangements; the brilliant (and constant) musical reinvention; the ever-pushed envelope; the hunger to move ahead -- always forward, never back -- conquering varied musical genres (several of which he created); the utterly astonishing use of heteronyms and the commitment to myth-making; the costumes; the style; the heels; the opera; the music videos; the screen-presence; the lightning bolt; The Spiders from Mars.

If ever there was a true original, it was Bowie.

And he took us in under his big space blanket and reassuringly promised that he was one of us, and, every once in a while, we'd feel like one of him. One of him.

I can't help but rave more about the heteronyms, the varied personae Bowie created to weave his epics, the characters like Ziggy Stardust and Aladdin Sane and The Thin White Duke, people who lived differently, wrote differently, sang differently, believed differently.

This was an artist creating artists, birthing different schools of art and letting them battle it out. They were all real people, or as real as matters, anyway. As the advert for The Rise And Fall Of Ziggy Stardust And The Spiders From Mars said, 'David Bowie Is Ziggy Stardust.' (And then, in tiny type, at the bottom of the ad: 'Ziggy Stardust is David Bowie.' 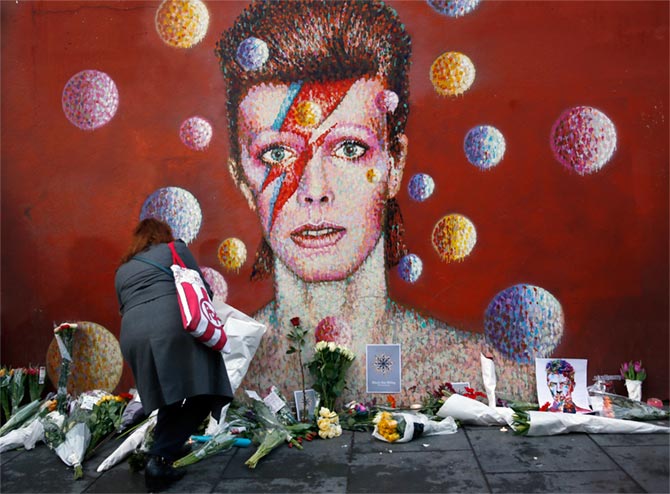 IMAGE: A woman leaves a bouquet at a mural of David Bowie in Brixton, south London, January 11, 2016. Photograph: Stefan Wermuth/Reuters

Always forward, never back. He will, alas, not be back.

This has been a rough week, an inconsolable, tear-stained week, a week of accepting that there will be no more grand adventures. Such gluttons, us. For he left us with Blackstar, his gorgeous final album and the most elegant of swan songs, knowing he was about to go and sparing us the agony of worrying about him, praying for him, trying to will him into getting better. Even as he wrote us a goodbye note, he made sure that we only really saw it after he'd gone.

Like so many of us, I never saw him perform live, I never looked into his eyes, I never shook his hand, I could never tell him what his music meant to me. (What, though, could I -- or any of us -- have said? What could possibly have sufficed? Adjectives would have to be invented to tell him what he meant to us. Possibly by him.)

And yet here we all are, mourning him like a friend, a lover, a brother, the coolest man we knew. And hey... he'd have liked to come and meet us, but he knew he'd blow our minds. 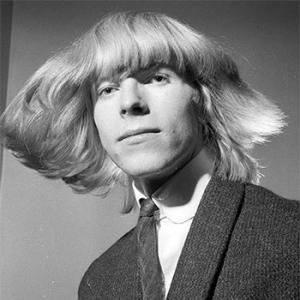