'We, the audience, listen to stories that have nothing to do with us and we cry, just from the truth of those stories.'
'And Anvita is one of those people who makes this happen.'
A fascinating excerpt from Gayatri Rangachari Shah and Mallika Kapur's new book, Change Makers.

Anvita Dutt Guptan believes all stories start with 'once upon a time'.

The words are tattooed on her right arm. One of Bollywood's leading lyricists says her own story was shaped by the library at the Hindon air force base in Uttar Pradesh. Its walls were lined with mismatched cupboards. 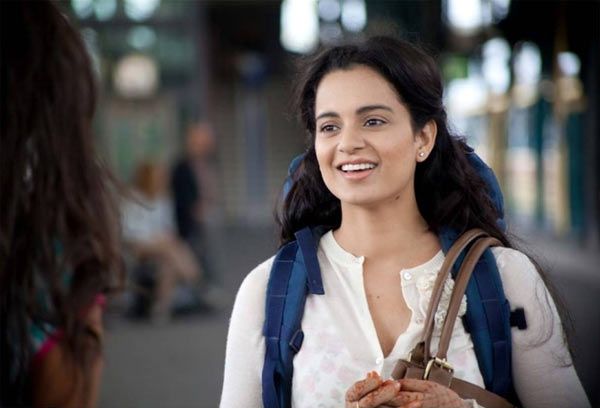 They were stuffed with books donated by families of air force officers lightening their load before moving on to the next posting.

It was here, in her 'favouritest' library, which smelled of 'paper and ink and well-thumbed books,' that Anvita, who was passionate about stories, became a voracious reader.

'I lived with books, I didn't need people,' she says.

Take a moment to think of the most popular Hindi films of the last decade. Rock On!! will be on the list, as will Dostana, Bachna Ae Haseeno, Student of the Year, Lipstick Under My Burkha and Queen. 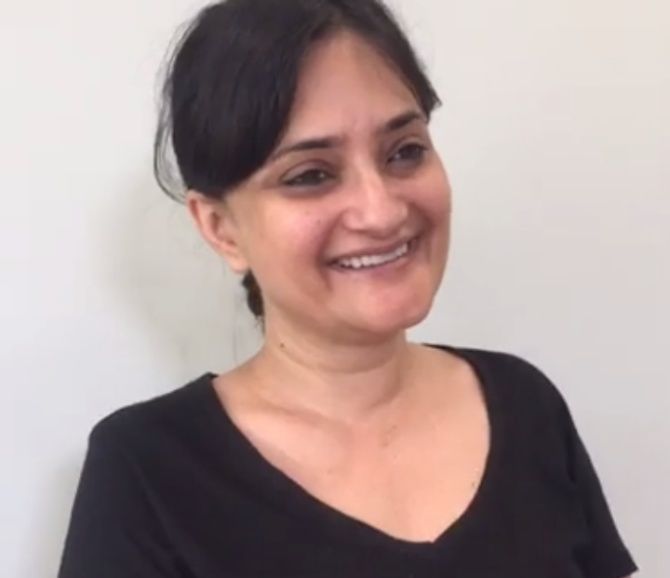 Anvita has been involved with all of them -- either as a dialogue writer or as lyricist.

The award-winning wordsmith has worked on over thirty films, but insists her contribution to Hindi cinema is 'very small'. Yet, few can deny the tremendous impact Anvita made with the 2014 smash hit Queen, for which she wrote the lyrics and dialogues.

'She gets the situation,' says Amit Trivedi, the music director of Queen. 'Whatever brief the director gives her, she gets it bang on and she comes up with something that works within the film and takes the story forward, but it also has the power to work outside the film and become a standalone hit.'

Queen's London Thumakda set to peppy Punjabi beats, raced to the top of the charts and has become a Bollywood classic.

It's a staple on radio stations and if Anvita happens to catch it or any of her songs, she reacts the same way each time, 'Oh my God, I wrote this! I am still delighted that I wrote this song. I love it!'

It would be wrong to mistake her excitement for arrogance. Instead, her reaction comes from a place of gratitude. Anvita is humble to a fault.

'I look at songs as gifts,' she explains. Gifts that she has a deep respect for. 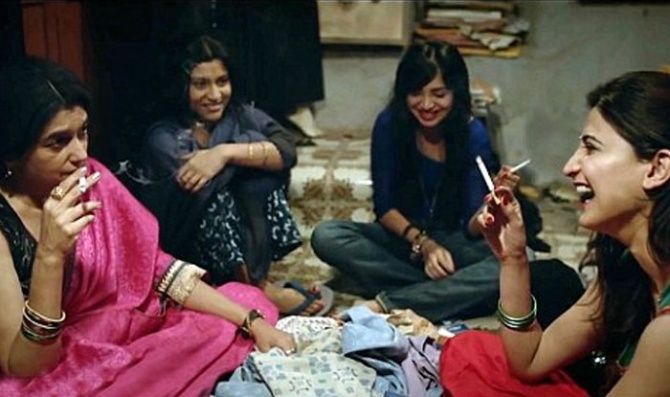 IMAGE: A scene from Lipstick Under My Burkha.

For Anvita, writing is sacred. She says sitting in front of a blank piece of paper is 'the most frightening thing in the world'. She is consumed by a nervous energy when she sits at her desk because, 'you are creating something from nothing. It's ether.'

And when she's not writing for herself, she worries about living up to the expectations of the person who has hired her to write. She asks herself, 'What if it doesn't happen this time?'

When it does, she says it feels like magic.

'I always imagine that there are words, like dust particles, all around me. So when I breathe, I move, they bounce off me,' she says, her voice becoming softer. 'I feel if I am still and I don't really do anything, the right words follow and they just kind of sit.'

Suddenly, she laughs. 'It sounds like mumbo-jumbo, I don't know if I am making sense?'

'Everything she writes is very real to her. Even though it is usually about other people in a film script, she feels every word she writes. She personalises it,' says Vishal Dadlani, the well known music composer who has worked with Anvita on films like Student of the Year, Dostana, Bachna Ae Haseeno and RA.One.

'We, the audience, are the people who listen to stories that have nothing to do with us and we cry, just from the truth of those stories. And Anvita is one of those people who makes this happen,' Dadlani says. 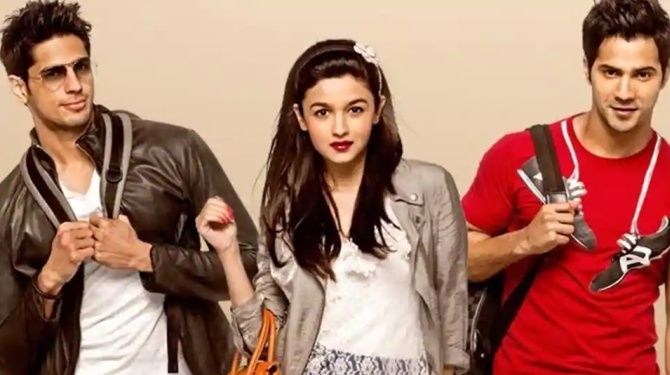 IMAGE: A scene from Student Of The Year.

After a career in copywriting, Anvita was ready to try something different. She longed to tell stories. She was fortunate to get a job as a dialogue writer at Yash Raj Films, one of India's leading film studios. But she came into her own when she began to writelyrics. That happened by chance.

One day, she bumped into the studio head Aditya Chopra when she had come to collect a cheque. He asked her to write dummy lyrics for a song since the musicians were jamming and needed some words to play around with. Anvita obliged. 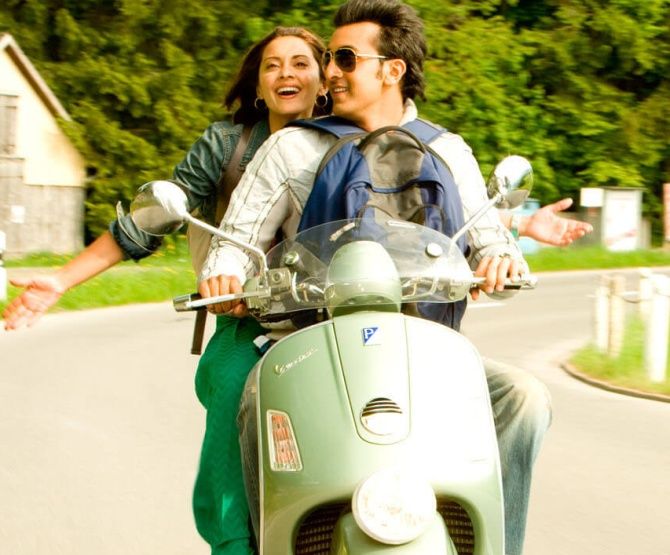 That was the first song she wrote. It was for Bachna Ae Haseeno.

Her best works are packed with emotion. She picks two of them in particular, and calls them bookends to a part her life. One is called Kyun Main Jagoon, a slow, soft song from the film Patiala House. She wrote it the day her marriage broke.

Anvita was married to her first love -- a young man she met in college.

He was her first crush, the first boy she kissed. They got married when they were 23. But heady love wasn't enough to sustain a lifelong partnership.

'What happened is, we grew up,' and their relationship changed.

The day her marriage ended, she sat with a friend and cried her heart out. She didn't say a word. Nor did her friend. He simply handed Anvita a piece of paper and a pencil and said, 'It's the only thing that will help.'

She wrote a few lines. Later that day, she had a recording with well-known music composers Shankar-Ehsaan-Loy. They gave her a melody and asked to write to it. 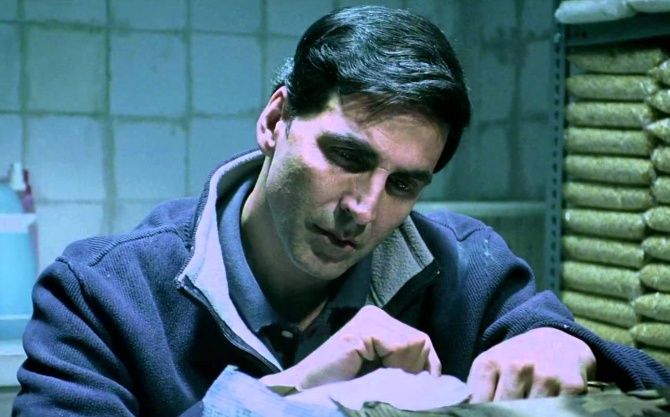 The words she had written earlier that day fit the music perfectly. Its closing lines are:

(Why does He scatter dreams into my waking world/Why is it that my God sleeps with open, unseeing eyes).

'It might not be very well crafted, but it's direct,' she says. She admits she was a mess after her marriage broke up. 'Most of it was to do with the fact that I had failed at something. I don't like failure.'

The divorce was not nasty, but it wasn't easy. It took years to heal.

When she worked on Queen, something shifted within her. Writing the lyrics for a song called Kinare, she wrote:

(I can never drown, I will never run out of shores. Wherever I stand will become the shore. I myself am the ground beneath my feet). 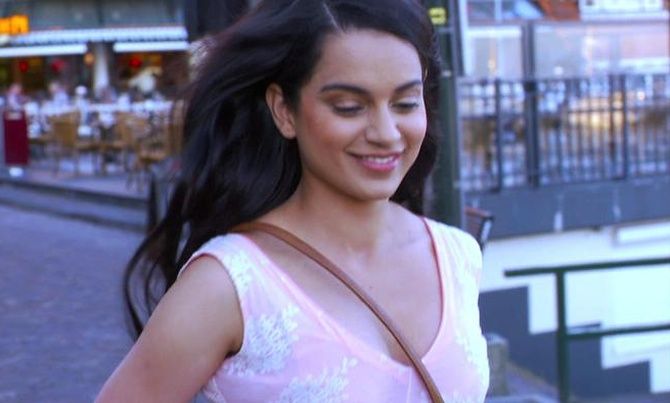 IMAGE: A scene from Queen.

For the first time, in a very long time, she could feel the sadness moving on. 'It was a song that said there is hope, that things are well. I was talking to myself.'

It turns out, she was talking to others too.

Two years after Queen released, Anvita was at a friend's home for lunch. There, she met a young woman who had stepped out of her house for the first time after her father's death.

Speaking about her grief, she explained how the words of a Hindi song she happened to hear in a cab had given her hope.

She had rushed home and bought the song on iTunes.

Listening to it over and over comforted her. That song was Kinare, from Queen.

The young woman had no clue who had written the song. All she knew was it helped her face life again. 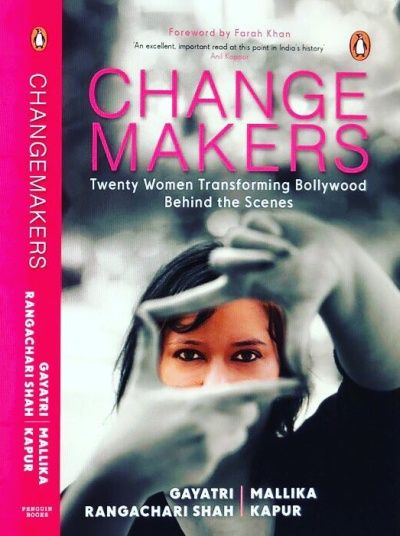 'There's no greater gift than if your writing can do that,' Anvita says. 'For that one reason, it's my favourite song.'

When the lady found out that Anvita had written it, she gave her a heartfelt hug.

Excerpted from Change Makers by Gayatri Rangachari Shah and Mallika Kapur, with the kind permission of the publishers, Penguin Random House India.