Sign in  |  Create a Rediffmail account
Rediff.com  » Movies » Waheeda Rehman: I DON'T think ours was the golden era 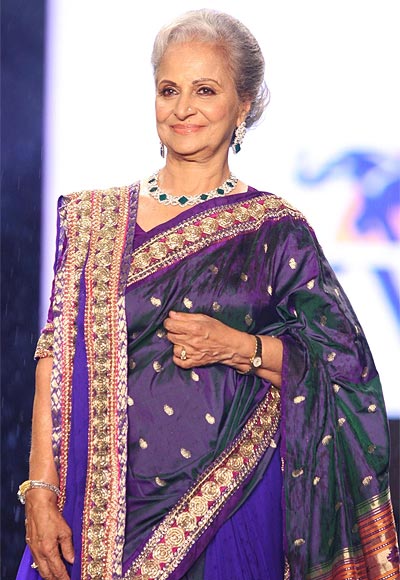 Rarely do you get a chance to meet an icon of the stature of  Waheeda Rehman.

Dressed in a purple sari and a smile that makes her eyes twinkle, Waheeda looks gracious and charming as ever as we meet in a suburban five-star hotel.

In the brief conversation that follows, the 77-year-old actress talks about awards functions, having received quite a few herself, what she thinks of the films being made today, and why filmmakers should leave the classics alone.

You are the global ambassador for South Africa Indian Film And Television Awards (SAIFTA). Do you think there are too many award functions these days?

Yes. Awards have lost their charm. The experience of getting an award has completely dissolved.

Awards functions start in December and go on till April and are distributed for anything and everything. Categories like Best Jodi, Best Dressed Celebrity are all redundant.

In my time, if your performance was good, you would get the award. It would be a nail-biting experience. We would always be curious whether our name would be announced as the winner.

When was the last time you had a nail-biting experience at an awards function?

It has happened a couple of times (laughs). The first time was obviously for Guide (1965). The competition was intense, as Suchitra Sen had given a brilliant performance in Mamta.

I knew I never stood a chance against her. I was shocked when they announced my name.

The next time I had a similar feeling was when I was nominated for Khamoshi and Neelkamal, which released in the same year (1969). I was expecting the award for Khamoshi but got it for Neelkamal. I was not too happy but still content (laughs).

You are often spotted at special movie screenings these days. What do you think of the films that are being made today?

I love the kind of films that are being made today. There is an interesting mix of films and we are getting so many different subjects.

We have so many talented young actors and filmmakers who are doing interesting work. I love Huma Qureshi. She was amazing in Gangs Of Wasseypur.

I also love Richa Chaddha. She played a mother in Gangs Of Wasseypur. And then I saw Fukrey where she played a gangster, and I couldn’t believe it was the same girl.

I like Vidya Balan because she chooses some interesting films.

'Actors and actresses were tagged according to what they did best' 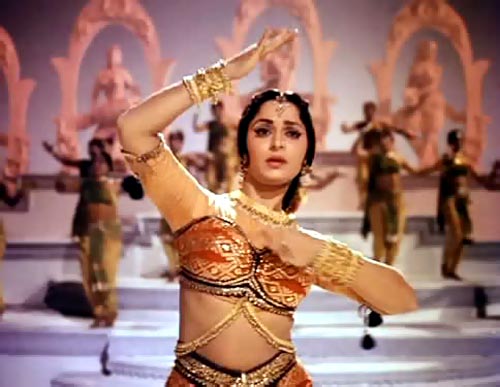 A lot of people in the industry are saying that with so many different and interesting films being made today, the golden era of films is back. Do you agree?

I don’t think ours was a golden era. There were very few films being made that were not typical love stories. There wasn’t a variety of films.

Also, actors and actresses were tagged according to what they did best. If someone could play a good vamp, then she would always get similar roles.

In those days, actors were very conscious of their image. Today, actors are ready to experiment and do different things, which is really good.

Any actors from the current generation that you enjoy watching?

(Thinks hard) I think it has to be Vidya Balan. Aishwarya (Rai Bachchan) and Madhuri Dixit were also very graceful. 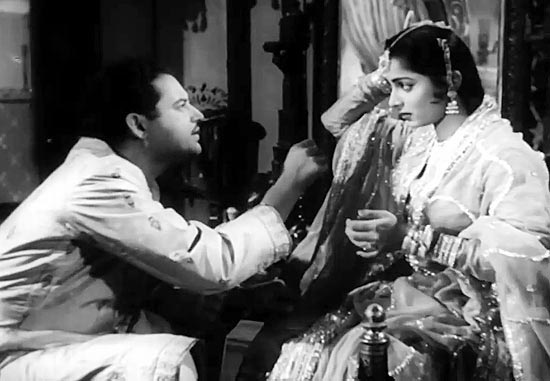 What do you think of the controversy surrounding the biopic on Guru Dutt?

Guru Dutt’s life is so heavy and sad that it would be a very tragic film. I don’t think it should be made.

Are you in favour of remakes?

Even in Hollywood nobody dares to remake a classic. In the same way I don’t think we should touch the classic films in Bollywood.

Films such as Guide, Pyaasa and Saheb Biwi Aur Ghulam shouldn’t be remade. There are a lot of good actors who could do justice to them but I don’t think anyone can match the original film.

Is it true that you are doing Vishwaroopam 2?

Yes. I am playing Kamal Haasan’s mother in Vishwaroopam 2.