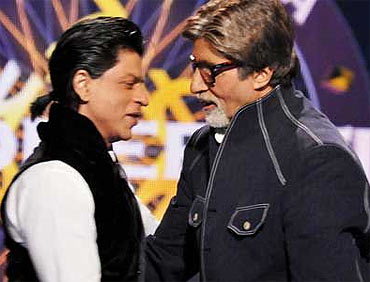 Sukanya Verma feels that special episode of Kaun Banega Crorepati with Shah Rukh Khan was a terrific one.

Casting coups aren't limited to movies alone. Television also understands the importance of throwing two heavyweights in the same frame. And so it's a mighty moment for the idiot box when Kaun Banega Crorepati's ongoing and one-time hosts get together to play a game of Q&A.

While Amitabh Bachchan has essayed the quiz master for four impressive runs, Shah Rukh Khan tested his star power as the serviceable if not spectacular anchor of the show in its third season. According to some reports, Khan's move didn't go down too well with the Big B. Over the period, things have been more than cordial between the two.

As if on cue, the 45-year-old repeatedly apologises to the Big B about this impertinence by stressing on how he's a huge fan of the show since the last 11 years, so much that he thought he should host it. 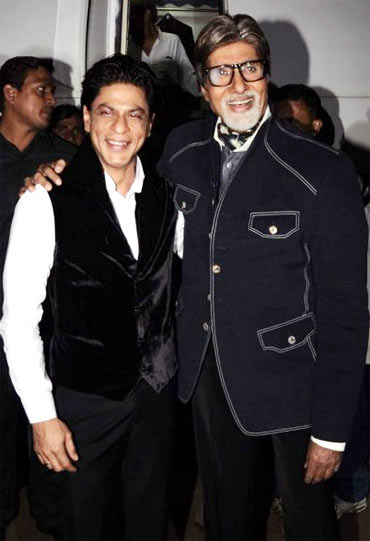 A gracious Bachchan, on his part, leaves out no superlatives to introduce us to the 'Vishesh mehmaan' (special guest) of this festival special episode.

Looking dapper in a white shirt, black trousers and velvet mandarin-collared vest, the Baazigar star charges towards the hot seat amidst applause and admiration.

Like most celebrities with a release around the corner, SRK too is utilizing the idiot box to plug, promote and propagate the virtues of his superhero extravaganza, Ra.One on every possible/popular programme on TV.

After wrapping up the game with Wednesday's roll-over contestant, Manisha Singh, Bachchan calls upon the 'superstar and superhero of Ra.One.' The epithet tango continues when AB and SRK jointly recite a poem along the lines of, 'Badshah ho ya Shahenshah, sab aapke Taj hain (Be it Badshah or Shahenshah, they're all your titles).'

'I'm on KBC to win and invest in Ra.One' 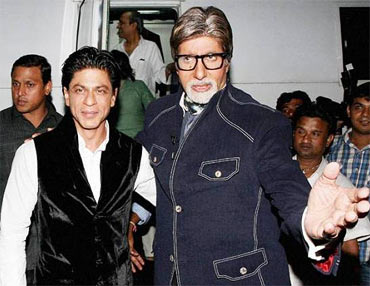 Obviously, the producer of one of Bollywood's most expensive films isn't here for the money. Setting aside the winning sum for a charitable cause, SRK quickly gets down to business with his characteristic humour. 'I am on KBC to win and invest back in the movie,' he quips.

But since he's a 'super' celebrity contestant, there's no way he'll walk out of the studio with anything less than Rs 50 lakh in his hand no matter how dumb or difficult a question is. Guess all's fair for a cause or charity? 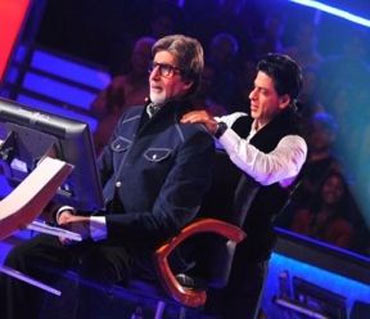 Fairness issues aside, the two seasoned stars keep the proceedings amusing, despite the predictable tone, with their comfort level and camaraderie. If on one hand, the senior Bachchan teasingly reminds his subordinate about his KBC stint with a, 'Aapke zamana mein teen lifelines hoti thi (There used to be three lifelines in your time),' SRK implores the Paa star to use his patent 'freeze' in place of 'lock kar diya jaaye?'

Bachchan's greatest quality as a host is his secure persona. He's most happy to let the contestant -- star or otherwise -- take centre stage, contributing at the right places with his well-timed wit or play-along enthusiasm. With SRK too, he doesn't feel the need to act any different except no regular participant would dare to offer him a massage and succeed too.

The two even swap places for a short duration with a quiz question posed in front of AB, no less. Too bad the latter thinks Octopus blood is yellow. 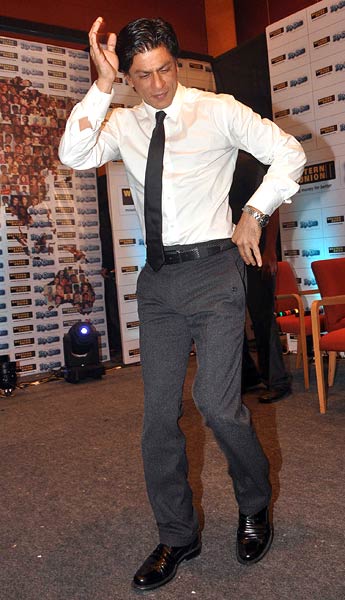 For a change, SRK is in a rare self-deprecating mood. He jokes about his reputation as a ham while recalling a memory from his Punjabi serial, Dil Dariya days, 'I would over act with my hands. Ussi din se mujhe overacting ka chaska lag gaya, phir maine choda nahi (I got addicted to hamming that day and haven't recovered till date).'

Or when he gets stuck on the ninth question: What was the only portfolio that actor-turned-politician Sunil Dutt held as Union Minister? Bachchan reminds erstwhile host Khan of his habit of offering the contestant a thinking cap when they were in a fix, promptly extending him the same courtesy, SRK quips, 'Dunce cap?'

That he answers the query without using any lifeline is another story.

Speaking of lifelines, there's one that involves him using audience poll to recognise Kareena Kapoor's voice in a song from Govind Nihalani's Dev.

And then here's what you never thought you would witness, happens. 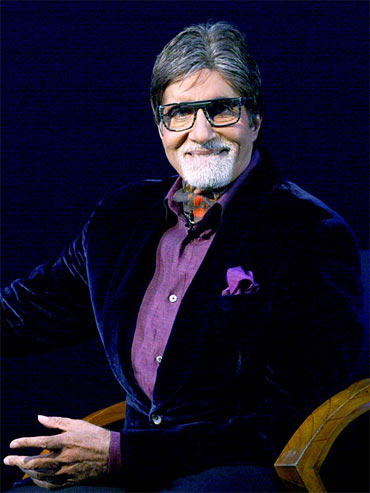 As part of SRK's evident bid to further publicize Ra.One and its leading lady, Bachchan dials Kareena's phone number. Now, there's rarely been any public interaction between the two ever since Abhishek Bachchan and Karisma Kapoor's broken engagement. Even though there's palpable discomfort in the Bodyguard star's voice, Bachchan dignifies this brief but affable conversation, warmly addressing the star by her home name, Bebo.

Meanwhile, Bachchan is all ears for SRK's funny stories and good-humoured banter, reciprocating with patience, affection and
delight without ever really letting his guard down.

At the same time, our host isn't one to lose focus, especially of time, not too gently reminding SRK of the timer at every single opportunity. Indeed then, 'Shrimati Tiktikki' is the subject of several chiding sessions between the two. Till the concluding alarm goes off, SRK has comfortably generated a hefty Rs 50, 00,000, which, incidentally is the same amount he won as the show's star guest in Season 1.

While Bachchan is Bachchan, inimitable and solid, SRK is the moment-maker of this special episode. He may not know that Nokia, a brand he endorses, is named after a Finnish river but he sure does know how to show his fans a good time. Let's hope Ra.One does too.