Image: The cast of Caminho das Indias
B S Prakash
As I go to the embassy and open my e-mail, there are the normal clutch of commercial news letters, trade enquiries, complaints about visa or passport services, invitations for events and so on.

But these days, also something a little bit more unusual. These are queries about the significance of the bindi. 'Can a sari be stitched, or worn without a blouse?' Or 'Is Kali the name of a curry or something spicier?' and such other matters of Indian exotica. And all this in Brazil where I am the Indian ambassador, experiencing currently the strangest and strongest manifestation of India's soft power that I have ever seen in my long and varied career.

How has this unprecedented arousal of curiosity about India come about in this distant land?

It is the result of a soap on Brazil's most important television channel, a soap which started in January and will run till September, every day for seven months. This novella, as television soaps are called in Brazil is predictably called Passage to India (Caminho das Indias in the original Portuguese) and is bringing India into the living rooms of a large majority of Brazilian homes night after night, and as I said for seven months.

B S Prakash is the Indian ambassador to Brazil. 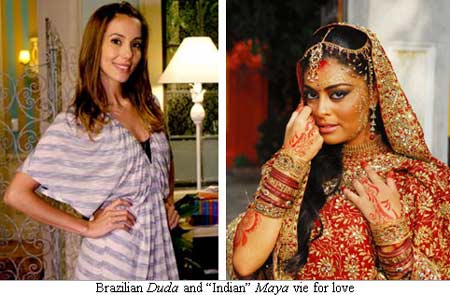 Image: Brazilian actors in the soap

Before I go into the all important question of what is the story and what is being shown about India, I must tell you a little bit more about the phenomenon of novellas in Latin America and their huge impact.

A popular soap on the dominant channel Globo in Brazil has an even greater impact than Saas Bhi Kabhi Bahu Thi and its appeal can only be compared to the Ramayana of yesteryears when all of India ground to a halt in front of the television.

The Brazilian soaps have their own formulas of love, lust, deceit and destruction with a happy ending but they are spectacular and sophisticated productions mounted with a huge budget. They first become the rage all over Brazil, with 60 per cent watching the novella in a land of 190 million, and they are later exported to other Portuguese speaking countries and other parts of Latin America.

The normal soaps are rooted and filmed in Brazil, but the Caminho story is a 50-50 mix between India and Brazil with all the beautiful Brazilian girls falling in love with Indians and vice versa leading to complicated love triangles and even quadrangles in the two countries.

Magazines have published a mini-glossary of Hindi words 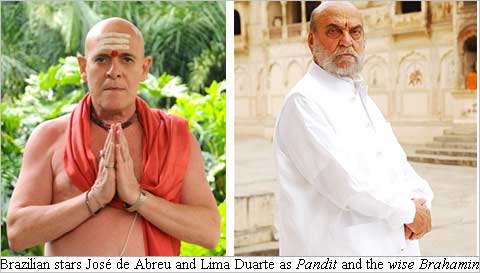 The important thing to note is all the actors are well known Brazilian stars, even while playing roles such as the pandit or pujari.

The whole story is told in Portuguese with a liberal sprinkling of phrases like theek hai, chalo, bhagwan ke liye, arre baba etc being spoken by the Indian characters to make them sound authentic.

These are now household words in Brazil and many magazines have published a mini-glossary of such Hindi words being used in the soap.

How does Brazil and India come together in the storyline? By the imaginative use of India's well known strengths in IT. Thus the Indian Dalit boy who leaves the mother country frustrated in love with a Brahmin girl ends up in Brazil as a software engineer. Please note that the oppressed Dalit and the pious high caste girl are both played by gorgeous Brazilian actors, attired in exquisite kurtas, salwars or saris and speaking only in Portuguese.

Similarly teenage Brazilian beauties fall in love with Indian boys drooling over them on webcam while engaged in Skype chat. The Indian part has been shot mainly in and around Jaipur, the Brazilian part in Rio de Janeiro and a bit of Dubai is also added to the masala.

A sumptuous image of India 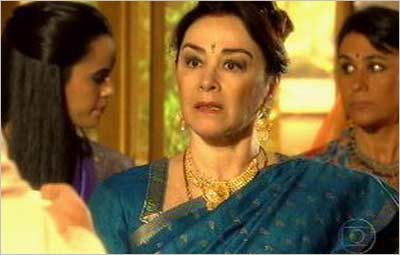 Image: A scene from the soap

If the IT savvy India thus gets connected to Brazil, what gives colour and flavour to the soap is the staple of curiosities about India: Caste, arranged marriage, elaborate weddings, exotic rituals and the many-headed Gods. All these are in abundance and hence the e-mails that we are getting in the embassy.

As a diplomat, I knew how important mass media is in creating or altering the image of a country and its culture, especially when it is relatively unknown as India is in Brazil. So when I first heard that Globo, the most powerful television channel was planning this soap, my feelings were of elation tinged with apprehension.

I made some enquiries and my heart sank when I heard that the main storyline concerned the caste system, the rejection by the society of the 'Dalit-Upper caste marriage' and so on. Curious but also cautious, I met the writer, the production unit etc and tried to find out more.

I soon realised that cows, castes and other cliches notwithstanding, I had no need to fear a deliberately negative portrayal of India hitting Brazilian television screens. The story was incredible, the actors great looking, the sets lavish, and the resultant image of India that was being created, sumptuous.

Here was another country, Brazil, also a developing country, with its own problems of poverty, disparity, slums, class differences etc but with an altogether different culture, taking a look at India, with an extravagant curiosity about our customs, crafts and cuisine.

Some of the description was exaggerated or inaccurate or plain silly, but was by no means ill intentioned or patronising. On the contrary, the overall 'gaze' to use a fashionable term from film theory was that of respect mixed with amused bewilderment.

Order for kurtas, incense sticks does not hurt bilateral trade 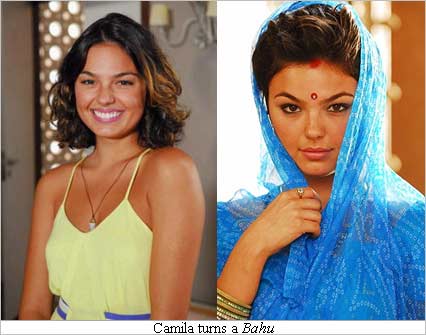 Image: Camila as the bahu

The interest was in Hawa Mahal and not on Dharavi. If most Brazilians think that we all live in mini-marble palaces, wear exquisite embroidered silks, and are constantly dancing happily to Bollywood tunes, I should not be complaining, I told myself. Since then we have just enjoyed the attention to India that we now see in our lives in this country.

The container load order for kurtas, kameez and incense sticks that we see does not hurt bilateral trade either.

But I must admit that the attention does take strange forms.

An Indian businessman was complaining to me in Sao Paulo, the bustling metropolis, the other day. 'Life is becoming intolerable,' he said.

'What has happened?' I asked.

'I was at the petrol station, the other day. A stranger, a Brazilian accosted me and asked, 'You are Indian?'

My friend had said that he was.

'Are you a Brahmin or are you a Dalit?' he had been asked.

We had a good laugh. The small Indian community in Brazil has become experts now in the history and evolution of our caste system and in spouting the examples of successful Dalits in Indian society!

The invasion of Indian culture 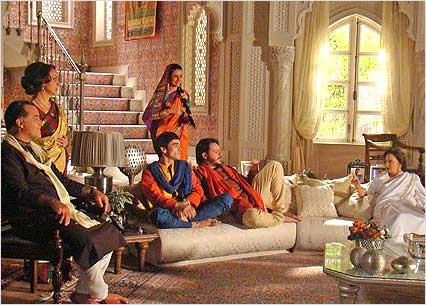 Image: The drama has lavish sets

But if some Indians are understandably upset, so are some Brazilians. I had a message from a senior functionary of the Catholic Church, Brazil being the world's most populous Catholic country.

'We have the highest respect for India and its culture,' the message began earnestly, 'But this invasion of Indian culture, the Hindu culture with its many gods and goddesses, its pagan practices and strange rituals will corrupt this Christian country. Should we not object to this propagation of India?' it asked sincerely.

'What do you think about the novella?' my Brazilian friends frequently ask me. 'Is it authentic?' I do not want to get into a debate on the accuracy of the depiction in this fiction.

'This novella has made India so popular, that no ambassador can ask for a better platform or a more propitious climate for projecting the real India,' I answer truthfully. 'And I am planning our revenge by thinking of an Indian soap on Brazil with all its standard images: sensuous Samba dancers, sensational bikini models, and the famed football stars playing a cricket match on Mumbai beach,' I continue.