The waiter at a Russia [Images]n restaurant in New York's Coney Island, home to about half million Russians and immigrants from the Caucuses, gazes at a customer for a minute. "May be you are from India," says the very elderly man. "Tell me about the new Indian film my cousins are seeing again and again in Russia. They say it is like Vagabond, story of poor people and a very young man. And it has a very nice song at the end."

He is referring to Raj Kapoor's [Images] Awara, a phenomenon across the communist world in the 1950s and has remained a perennial favorite for over four decades. And he is also talking about a new phenomenon. The Indian customer tells the Russians the new film is called Slumdog Millionaire and it is running in New York in many theatres.

Just as Slumdog has become a huge hit across America, in Russia too the film is doing impressive business. Released two weeks ago, it has grossed over $1.2 million, according to trade publications. And now with the eight Oscars it has garnered, the film could become a bigger success not only across Russia but also worldwide.

Just as the Oscars [Images] were approaching thanks to the incessant buzz, the gritty but ultimately feel good movie had started rising at the box-office in most of the 25 countries showing it including Uruguay, France [Images] and Russia. 'The most impressive performance belonged to Slumdog Millionaire [Images] which was up four percent to $8.4 million from 25 markets (outside North America, boosting its total to $74.3 million,' wrote box office expert Conor Brosnan in boxofficemojo.com, discussing the film's box office status.

Last weekend, it was the number three film worldwide (outside North America); the number one film, the star-driven The Curious Case of Benjamin Button grossed $21 million in 61 countries, followed by Bolt's $11 million in 37 countries and Slumdog's $8.5 million in 26.

Soon after the Oscars and reams of new worldwide publicity, the movie began to climb up the box office charts. In North America, it soared from number eight spot on the chart to number two. Worldwide gross by February 26 weekend was approaching $180 million. And there were predictions that the film, which cost just about $15 million (with some $50 million for print and publicity) would end its worldwide run with at least $260 million. Some observers believe it could even top $300 million. 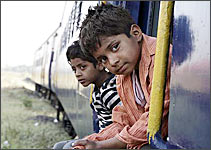 The movie, which will be opening soon in Germany [Images], Japan [Images], South Korea, Sweden, Austria and several other territories, has been most successful in North America where it has grossed $103 million by February 26 and the United Kingdom where the gross was approaching $35 million.

Director Danny Boyle [Images] has repeatedly said he had never thought the film would resonate with the audiences outside the United Kingdom apart from playing in a handful of small, art theatres in key cities.

Even in India, where many people were upset that the film was showing the underbelly and not the India that is shining, its box office is approaching $5 million. It would have been much higher but for the huge DVD black market of the film.

In most countries the film opened among the top five; there were no startlingly big openings. For example, in France it opened to a decent $1.2 million weekend. But thanks to a terrific word-of-mouth and slew of stories in major magazines of the country, it remained growing steadily.

No film that Danny Boyle directed in the last two decades, not even The Beach starring a post-Titanic [Images] Leonardo DiCaprio, has come anywhere near the worldwide success of Slumdog Millionaire.