Sign in  |  Create a Rediffmail account
Rediff.com  » Movies » Karthika: I'm the hero of Ko, along with Jiiva

Karthika: I'm the hero of Ko, along with Jiiva 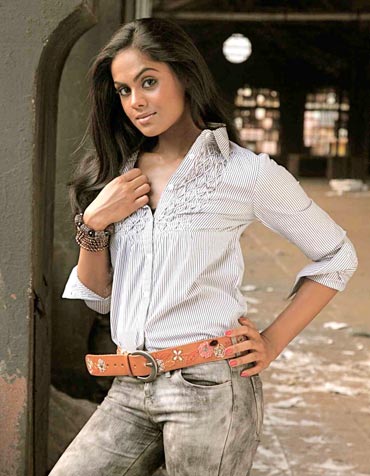 Karthika, daughter of yesteryear South Indian actress Radha, made her debut in the Telugu film Josh with Nag Chaitanya. Then came her Malayalam film Makara Manju on the life of the world renowned painter Raja Ravi Varma, played by ace cinematograoher Santosh Sivan.

The actress will now be seen playing a journlaist in this week's Tamil release Ko , which has been directed by National Award winning cinematographer, K V Anand.

In a chat with A Ganesh Nadar, Karthika talks about her early days and her acting experience in the movies.

Tell us about your early days.

I was born and brought up in Mumbai. After finishing my 10th standard, I got a chance to act in the Telugu film Josh and the Malayalam movie Makara Manju.

After acting in these two movies, I continued with my studies. I am now doing my Bachelors in Business Management from an institute in Mumbai. 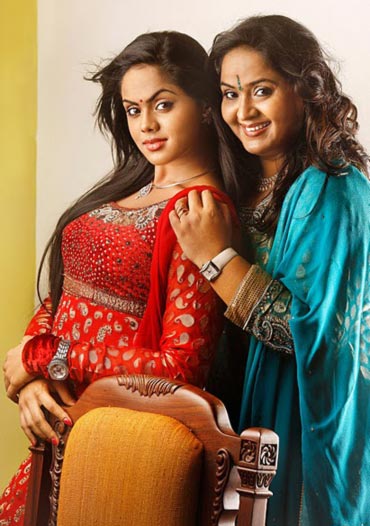 Image: Karthika with her mother Radha

When did you decide on acting?

It just happened by chance. I was studying in Mumbai. My mother had stopped acting but just by being her daughter, I was offered a lot of roles. My mother would always reject them.

Then I met the Josh team. They offered me a role of a teenager. Nagarjuna's son, Nag Chaitanya was the hero. My mother agreed for the film. Within a week, I started shooting. I have learnt classical dancing so it helped me in the film. My mother is happy with my acting.

How was it acting with Santosh Sivan? Makara Manju was his first film as an actor.

Santosh Sivan is a very famous cinematographer. Director Lenin Rajendran is another legend. I was working with legends, the best in the industry. I was quite nervous. Also, I was playing a double role in the movie. Santosh was also nervous as he was acting for the first time. But the crew was very helpful. Even though they were seniors, they were young at heart. So, I connected with them very well. 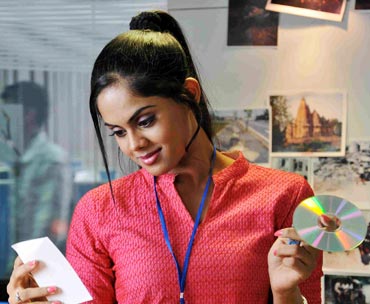 How different is it working in Tamil, Malayalam and Telugu films?

The Telugu movie was a commercial one. There the audience loves you. They are very emotional.

Shooting in a Malayalam movie was tough. The team was very technical, professional and serious. The whole environment very intense when we were shooting.

My mother was very popular in Tamil cinema so I was expected to debut in Tamil. I think K V Anand got the best out of me.

How did you get the role in Ko?

K V Anand saw my photo with Santosh Sivan in a newspaper. He got to know that I was Radha's daughter. He contacted me and gave me the script and narrated me the story. I liked it and so I agreed.

'My mother always tells me how not to act' 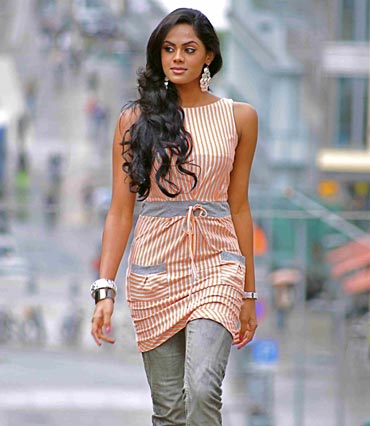 How was the experience of working with director K V Anand?

I remember him telling me that I was the hero of the film, along with Jiiva. He gave me so much space. It was a new experience for me.

How was it working with Jiiva?

Jiiva is an experienced actor. It helped me act better. We were treated as equals. More than an actor, he is a very good human being.

What have you learnt about acting from your mother Radha and your aunt Ambika?

My mother always tells me how not to act. She insists that I be as natural as possible. When I was acting in Josh, I did not know the language. She helped me with the dialogues. Everyone liked my dialogue delivery, so it's obvious she had done a good job.

Even before I entered movies, my aunt would always keep me updated about the latest news of the industry. She used to tell me about the latest fashions and that helped me in my dressing sense. 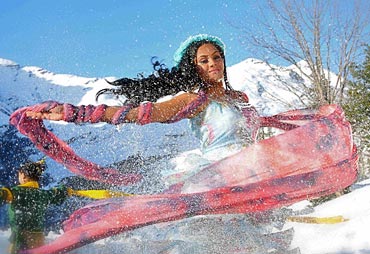 Have you got any Bollywood offers?

Yes, but my mother wanted me to debut in the South.

It was reported that you were going to act in a Hollywood film. Is there any truth in it?

After my Malayalam movie Makara Manju went around the festival circuit, I got offers from some art movie directors from the West but I did not take them up.

I am just waiting for Ko to release.