Genelia: Like it when people call me cute and bubbly 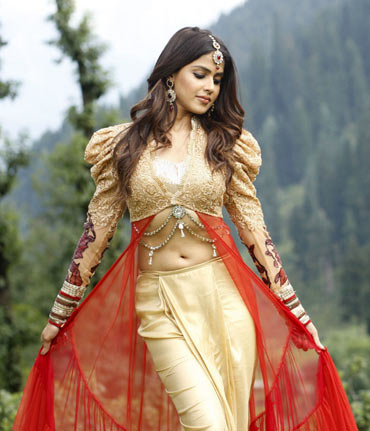 Her Tamil film Velayudham (starring Vijay, Hansika, Saranya Mohan and others) is a Diwali release and she plays a pivotal role as a journalist.

From Jaipur, where she is shooting, she spoke exclusively to Radhika Rajamani about her new film.

When you chose Velayudham, did you know it was the remake of the Telugu film Azad?

It's not a remake; it is inspired to a certain extent. That's what director Raja told me. I haven't watched Azad. I wanted to, but Raja asked me not to.

He said, it's a totally new film and you shouldn't get influenced. So I went with his brief.

All I knew was, it was going to be a different film. There was a sweetness about the girl but there was a serious side to her character too, and that's something I wanted at some level. I wanted to do a role of that calibre.

'My role is new to me, unlike anything I've done before' 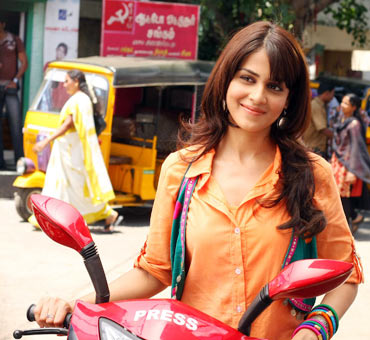 You play the role of a journalist in the film. Did you accept it because you haven't played such a role before?

To a certain extent, I wanted a discernible role. I love being myself, I love the fact that I bring a smile to people's faces and everyone calls me cute and bubbly. I like to play around that area. I also like to play roles where there's emotion, seriousness, dejection at times, a fight. And, that's what I saw in Velayudham.

When I first spoke to Raja, he said, this role is played by the likes of Shabanaji and Soundaryaji and if it's offered to you, you should take it as a huge compliment.

As I shot for Velayudham, I realised it was all about many stories, all about a certain feeling this journalist carries.

What else is interesting about the role?

For me, it's totally new, nothing like Haasini of Santosh Subramaniam. Then there's Vijay -- we are also the Sachein pair. More than that, there's a cause, there's a reason, and for the heroine to be linked with that is a big plus point for me. Ninety-five percent of the time, most of the girls don't get linked to the main plot of the film and here she is linked to the plot; she is the reason.

'It's always a pleasure to work with Vijay' 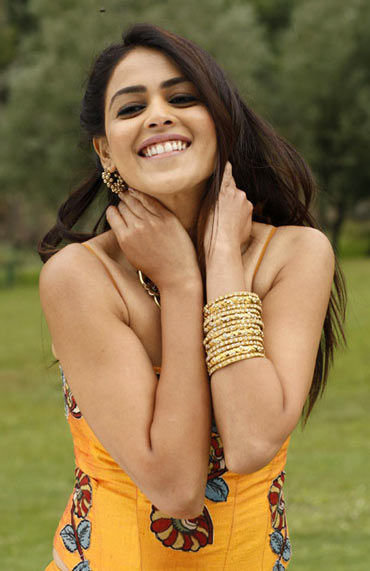 Did you base your performance on your observations and rapport with journalists?

It's about the energy every young journalist has. When they start in their job, they want to do their best for society and they put in everything.

Here, it's for a social cause. I haven't interacted with many journalists because I normally meet the film and entertainment journalists. My brother is part of CNBC so I hear interesting little things about journalists. I think the essence of the role is the passion for one's job.

How does it feel to be acting with Vijay after a gap of many years?

It's always a pleasure to act with Vijay. He maintains the mood on the sets.

I know Vijay's family too. It's nice to interact with someone whom you have known for so long.

Whenever we bumped into each other, we kept telling each other that we have to work together, but we were both busy with other things. The fact that people are waiting to see Vijay and me together is a great feeling.

'Hansika is a very pretty girl' 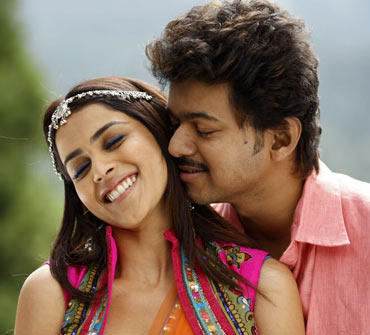 Hansika is also part of the cast. Do you have scenes together?

We do. Our tracks are separate but there is a portion where we work together.

How was it working with her?

It's nice to see new energy, new girls on the sets. Hansika is a very pretty girl. She has just started off in Tamil and I know she'll definitely be rising. She's got a lovely smile and a child-like quality.

'It's a huge star cast and very difficult to shoot' 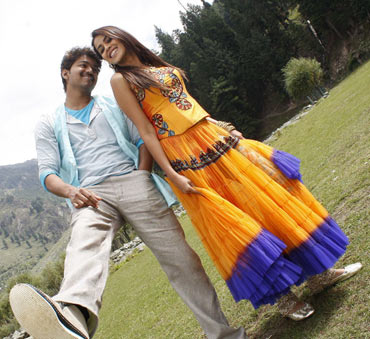 The film has a huge star cast. Do you have scenes with others like Saranya, Abhimanyu Singh, Santhanam etc?

Yes, I have scenes with everyone. It's a huge star cast and a very difficult shoot. Hats off to Raja, the direction team and the production team for carrying off such a huge shoot.

What were the challenges you faced while shooting this film?

As this film is based on my character Bharathi's emotions, I knew it was my responsibility. I knew I had to give it my best. The film depends on that. 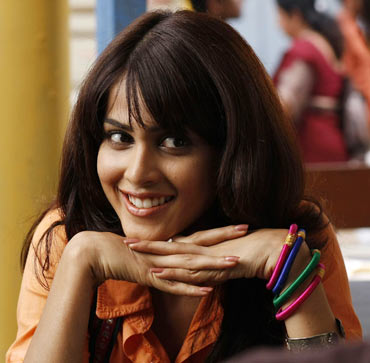 How did the crowd react to you in the interiors of Tamil Nadu and Kerala where the film was shot?

It was overwhelming to see how people came running to talk and see. With Vijay around, it was double the crowd.

We shot in Pollachi. I like that place. When the trailer was screened and my shot was shown, there was such a roar. It was exciting. It's been a while since I had a release in Tamil.

How was it shooting Velayudham on the whole?

This year I have done some great films. With Urumi and Force I stepped out of my comfort zone, and Velayudham was in a different zone.

'Where I do just one film, others do six' 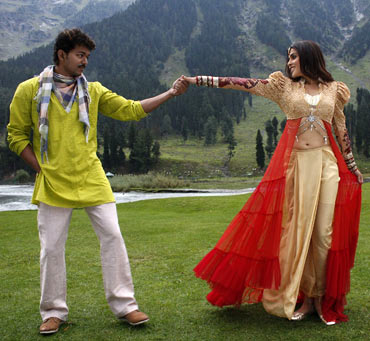 This is a Vijay film and it's releasing on Diwali. Do you think it will sparkle at the box office?

It should. I'm sure, it will. People are excited. The hype is crazy.

Have you signed a Tamil film?

No, not right now. There's so much work. There's Tera Naal Love Gaya, Rock the Shaadi and Naa Ishtam.

Three films back-to-back... must be hectic?

It has been extremely hectic. Every year I think I will have lighter schedules and holidays but I don't. I am one of those who shoots long days for a film (90-100 days).

Others are lucky as they shoot for fewer days. Where I do just one film, others would do six. But I love the roles I do. I also love the fact that I get responsible roles.