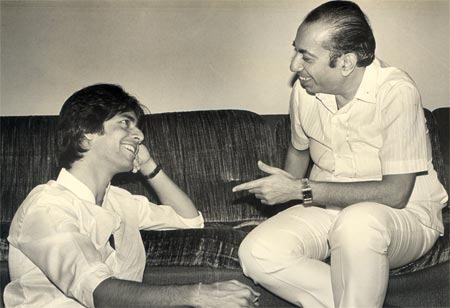 Image: Ruhan with Mahendra Kapoor
Patcy N in Mumbai
The famous 1970s singer Mahendra Kapoor, who gave us songs like Neele Gagan Ke Tale and Mere Desh Ki Dharti, would have been 78 today if he were alive.
In the first part of this special two-part series, his son Ruhan talks to Patcy N about his famous father, and shares interesting anecdotes about the people in his father's life, like mentor Mohammed Rafi, the bygone era of music and much more.
On growing up with a famous father
When I was growing up, I did not realise that my father was such a huge singer because at home, he was extremely simple. Sometimes in school, the teachers would see us differently and children would point at me and say, 'He is that popular singer's son'.
I remember this funny incident. My father had studied in St Xavier's School and later in St Xavier's College and coincidentally, his vice-principal, Father Carasco, was my principal in St Mary's School.
When I was about 10, we had gone on a tour to South Africa and ended up doing 48 shows, instead of the 10 scheduled. (In fact, I started my singing career there -- it was the first time I performed on stage.) We stayed there for three-and-a-half months and I missed my terminal exams and the school would not allow me to sit for my final exams.
My mother was very upset and my father came to the school to meet the principal. Father Carasco called my father into his cabin along with a few teachers. He said it was very serious, but now, he would have to do something for him.
"I want you to sing a song from Humraaz; then I can allow your son to sit for his final exams," Father Carasco said.
Everyone burst out laughing and my father sang the song!
Tags: Father Carasco , Mahendra Kapoor , Ki Dharti , Mohammed Rafi , Neele Gagan Ke Tale

'Singers did not backstab each other in those days' 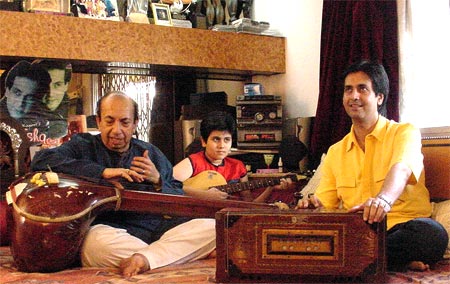 On his father's contemporaries
I grew up in a musical environment. When my father started his career, there were giants in the industry like Rafisaab (Mohammed Rafi), Talatsaab (Talat Mahmood), Manada (Mana Dey) and Mukeshji.
At 5:30am, we would hear the tanpura as he would begin his riyaaz. We got ready for school with his music in the background. He was very sincere with his riyaaz and would practice for hours.
His music teachers would come home. Composers came home for two-three hours in the evening for sessions. Kalyanjibhai was our neighbour (we lived in Peddar Road, South Mumbai), so he would often drop in with Anandji. Manoji (Kumar, actor) came very often to our house, (composers) O P Nayyar and Ravi uncle came over to our house too.
My father took me to his recordings right from my early childhood. I would meet Lataji (Mangeshkar) and Ashaji (Bhosle) with whom he would sing duets. Most of the recording was done at Famous Studio (in Mahalaxmi, South Mumbai). I have very strong and beautiful memories of that studio.
During rehearsals, the singers would discuss what they were listening to, new music they had heard... the conversation was very constructive. They did not backstab people, they spoke about music and lived music. Whenever Kishoreda (Kishore Kumar) came, it was all masti. We would laugh for an hour!
Tags: South Mumbai , Mohammed Rafi , Kishore Kumar , Kalyanjibhai , Anandji

'There was immense dedication in those days' 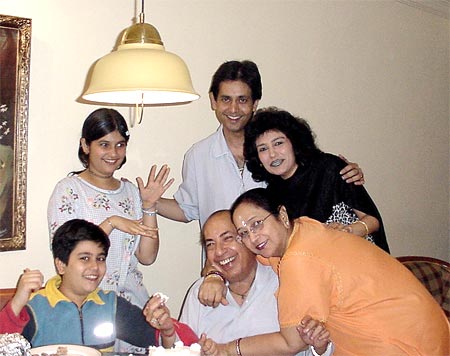 On meeting flautist Pandit Hariprasad Chaurasia for the first time
Once, we were doing a recording with 200 musicians. My father pointed out one musician, who even in the tea break continued to practice. He was Pandit Hariprasad Chaurasia.
My father asked him why he was not taking a break. He said he would rather utilise the time for better things. In between those breaks he did his classical music riyaaz.
There was immense dedication in those days.
On Laxmikant-Pyarelal
We were in Mahableshwar (a hill station in Maharashtra) once when Laxmikant of the Laxmikant-Pyarelal composer duo called my father to say there was a recording the next morning and could he come for it. We drove down early in the morning and went straight to Famous Studio.
There was no pressure in those days. My father heard the song two or three times and then sang the first trial take and the first trial song. The song was Mere Sapne from Nagmandir.
Laxmi-Pyare were so happy that Laxmi took out Rs 100 from his pocket and gave it to my father as a blessing! People were very emotional in those days.
Tags: Hariprasad Chaurasia , Laxmikant , Laxmi , Maharashtra , Mahableshwar

'Rafisaab was very fond of eating'

On Mahendra Kapoor meeting Mohammed Rafi for the first time
My father considered Mohammed Rafi his guru. He came to our house a lot and was very close to my family.
My dad was just 12 years old when he heard Rafisaab's Yahan Badla Kafa Ka Bewafai, a duet with Noorjehan, composed by Naushad for the film Jugnu (1947).
He told me that when he heard this song, he got goose bumps. He was just flabbergasted by the voice. He immediately went searching for Rafisaab's house in Bhendi Bazaar (in South Mumbai).
There was a lot of tension then because of Partition. Our driver was Muslim and he refused to take my father there (it was a majority Muslim population area and the Kapoors were Hindus) but my dad somehow convinced him. My father knocked on the door and a gentleman wearing a lungi and banyan opened it and asked what he wanted. My father said he wanted to meet Mohammed Rafi.
The gentleman said 'I am Mohammed Rafi. Come on in'.
He asked my father why he had come, and my father said 'I loved your song so I came searching for you. My father does not know I am here.'
Rafisaab said, 'Are you interested in singing?'
My father lied and said, 'My brother is interested in singing.'
So Rafisaab told him to come the next day and bring his brother and father.
The next day, my father convinced his father and brother to go along with him. It soon came out that it was my father and not his elder brother, who wanted to learn music.
That's how my father started going to Rafisaab's house and recording studio and he started coming to our house.
Whenever my father was to sing in college competitions, Rafisaab would call and ask him to sing his chosen song to him on the phone and if he did not sing it well, he would come to our house and teach my dad! My grandmother would make puris and lassi for him -- he was very fond of eating.
My dad was 10 years younger than Rafisaab. They just sang one song together. My father's voice was very similar to Rafisaab's and Rafisaab thought that people would create problems because of that. He did not want their relationship to get spoilt. Rafisaab came for my thread ceremony and my sisters' weddings.
Tags: Rafisaab , Mohammed Rafi , Muslim , Bhendi Bazaar , Yahan Badla Kafa Ka Bewafai

On Rafi's death
Rafisaab's death shocked my dad. I still remember that day. My father was very tired and had come late from Kalyanjibhai's recording.
Suddenly, the phone rang. It was Kalyanjibhai and before he said anything my dad knew there was bad news. When he heard that Rafisaab is no more, my father broke down like a child. He did not eat. He got ready and then left for Rafisaab's bungalow Rafi Manzil with me.
On my father's death
My father also died of a cardiac arrest. He was sick for a very short period. He had arthritis and had knee surgery done after which he had an infection in his bladder which travelled to his kidneys and he had to undergo dialysis.
In the hospital, where he went for dialysis, he would meet Manoharida (Manohari Singh, saxophonist from RD Burman's team) and then Feroz Khan, who was undergoing chemotherapy. Then we started getting his dialysis done at home because he hated hospitals.
It was his mother's death anniversary the day he died, on September 27, 2008. He was very attached to his mother. He was very happy that day. There was puja at home and my mom had cooked good food, as they do for this day. My father liked Shubha Mudgal and asked me to get the CD of her Shiv bhakti songs.
Around 6:30 pm, he started feeling very hot. He passed away peacefully.
Tags: Rafisaab , Kalyanjibhai , Feroz Khan , Manohari Singh , Shubha Mudgal
More