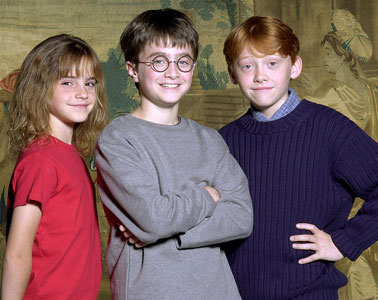 Three of the most loved characters in cinema -- Harry Potter, Ron Weasley and Hermoine Granger -- will be saying goodbye to us this Friday. Ever since the first Harry Potter released in 2001, we've practically watched the famous trio grow into the people they are today.

It seems like yesterday when the child actors were introduced to the world as the three main characters of the film and we knew they'd be just perfect.

Harry's cute-as-a-button looks, Hermoine's precocity and Ron's goofiness won us over and all of us were hooked.

We thought it'd be fun to revisit the trio as they were captured on camera at various stages in the film starting with the very first time they were introduced as the cast.

On August 21, 2000, Warner Bros announced that Daniel Radcliffe, 11, Emma Watson, 10, and Rupert Grint, 12, would be playing the main characters in the film adaptation of JK Rowling's book. 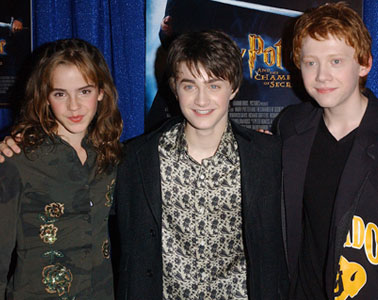 Emma Watson, Daniel Radcliffe and Rupert Grant at the US premiere of Harry Potter and the Chamber of Secrets at the Ziegfeld Theatre in New York on November 10, 2002.

While we could see glimpses of a defined jawline on Radcliffe's face, Emma's demeanour gave us hints of a confident young girl on the threshold of womenhood. And Rupert was just beginning to popularise his messed up hair. 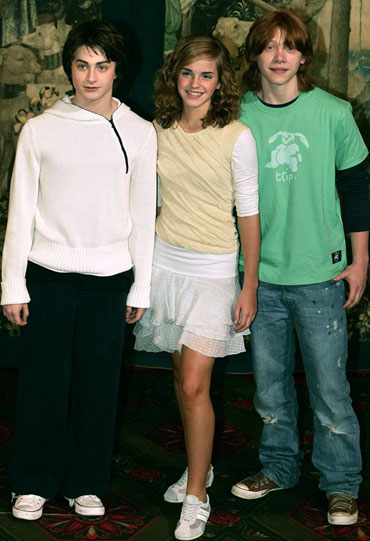 The trio posed for pictures in London on May 27, 2004, just a few days before their third film, Harry Potter And The Prisoner Of Azkaban premiered in the UK.

Radcliffe, 15, Emma, 14, and Rupert, 16, were well in their teens by then and it showed! They'd changed from cute to attractive. 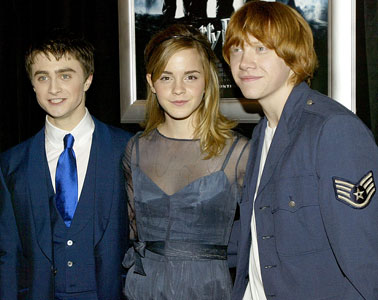 The actors stepped out in style again for the New York premiere of Harry Potter And The Goblet Of Fire in 2005.

The teens gave us a more formal look with Radcliffe stepping out in a suit and Emma in a dress. We like! And the whole look was balanced by Rupert's jacket-over-a-white-tee attire. 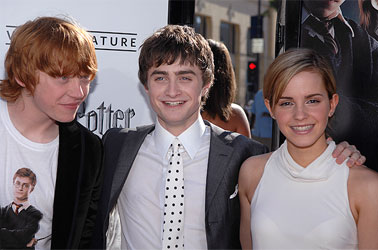 In 2007, the lead actors attended the premiere of Harry Potter And The Order Of The Phoenix at the Grauman's Chinese Theatre in Hollywood.

This year too, the trio kept up appearances as now 18-year-old Radcliffe stuck to a formal suit while Emma, 17, wore a pretty white dress and Rupert, 19 and the eldest of the lot sported his trusted casuals.

It was great to see the camaraderie among them even off screen. 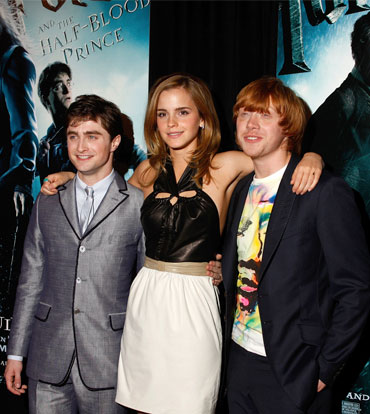 Here, the actors are seen arriving for the premiere of Harry Potter And The Half Blood Prince in New York in 2009.

Now this was one heck of a sighting. Emma, who was 19 then, finally comes into her own in a devilishly chic dress while Rupert gave a very playboy-ish vibe with his cool tee and jacket attire.

As for Radcliffe, he was his conservative self in a grey suit.

PIX: Harry, Ron and Hermoine over the years 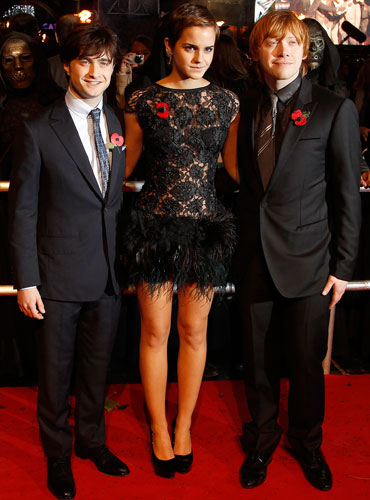 Emma Watson poses with Daniel Radcliffe and Rupert Grint as they arrive for the world premiere of Harry Potter and the Deathly Hallows: Part 1 at Leicester Square in London on November 11, 2010.

A 20-year-old Emma Watson pulled out all stops with her killer pixie haircut and that black dress that kicked butt. A femme fatale at best! Radcliffe and Rupert got to be her arm candies. 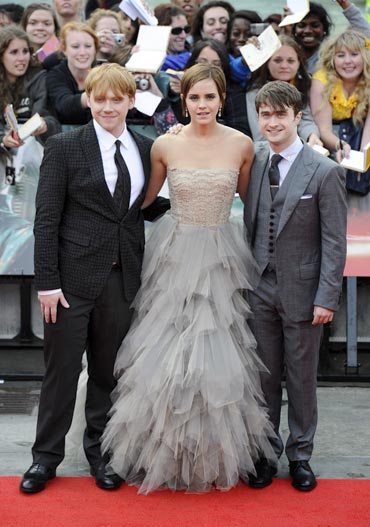 In their last outing as cast members on Harry Potter And The Deathly Hallows Part 2, a dapper looking Rupert and Daniel Radcliffe attended the film's world premiere in London with a very fashionable Emma Watson.

And finally it all came to an end. Radcliffe (22), Emma (21) and Rupert Grint (23) made their final appearance as Harry Potter cast members. Worldy-wise, they posed confidently for pictures.