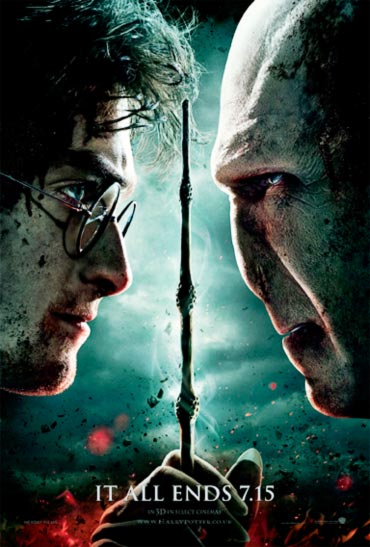 Image: A still from Harry Potter and the Deathly Hallows 2

The first look of the last film in the Harry Potter series is out. Harry Potter And The Deathly Hallows 2 will reportedly be the shortest among all of the Potter movies, and is set to release on July 13.

The end begins as Harry, Ron, and Hermione go back to Hogwarts to find and destroy Voldemort's final horcruxes but when Voldemort finds out about their mission, the biggest battle begins. 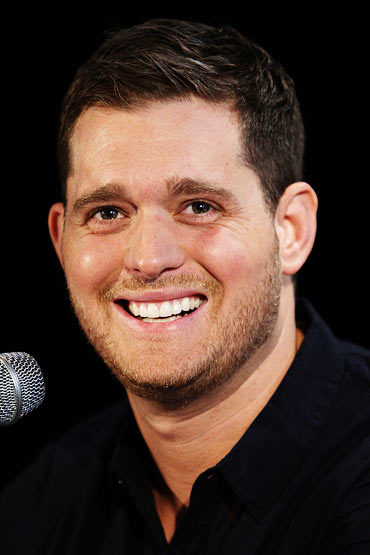 The Hollywood hitmaker had been dating the Argentinian actress since 2008. While the nuptials were relatively low-key, the couple happily posed for a mob of fans after the wedding before Luisana -- dressed in a violet gown -- tossed her bouquet of purple orchids into the crowd.

It is believed the couple, who announced their engagement in January, will be hosting a larger ceremony for 300 guests at a mansion outside the Argentinean city next month. In addition to the pair's South American nuptials, Canadian-born Michael recently announced plans to host a second wedding in Vancouver.

The 35-year old star, who's previously dated English actress Emily Blunt, joked that he postponed the wedding because the royal couple -- who's getting married on April 29 -- would steal away all the press. 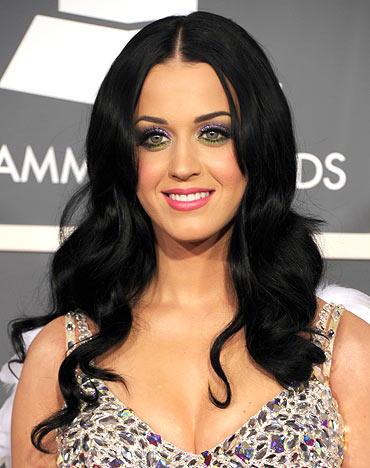 Image: Katy Perry
Photographs: Jason Merritt/Getty Images
Katy Perry has shed her clothes in her video for new single E.T. The singer revealed her lower half, but to her fans' surprise it turned out to be that of a faun.

Of course, this is simply computer trickery, with Perry playing an alien for the extraterrestrial themed song, reports the Daily Mail.

Using prosphetics and face paint, the singer plays an alien who drifts through space before coming to a rubbish-strewn planet. Amidst the piles of salvaged steel, she finds a broken robot that, at her touch, turns into a beautiful naked man.

The single is a collaboration with Kanye West, who also appears in the video, although he keeps his clothes on.

The video was premiered Thursday night, soon after Perry hit the number one spot in the US for the fourth consecutive time with the latest track from her California Dreams album.

She tweeted her excitement at her fifth chart-topper. 'I just got off stage to amazing news. You've made ET number 1!!! This is record breakingly amazing. That's four in a row! I am in tearssss!!!' she posted. 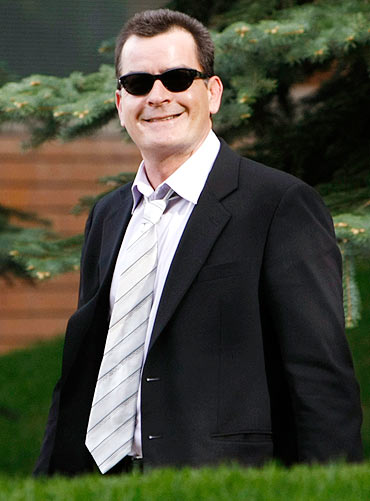 Image: Charlie Sheen
Photographs: Rick Wilking / Reuters
Charlie Sheen has been sued for $ 20 million by a television producer over a failed reality show.

Ed Meyer claims that he was working with the Two and a Half Men star's uncle Joe Estevez on a project called Being Sheen but was stopped from making it after Sheen and his parents Martin and Janet, conspired to 'threaten, interfere with and restrain the series,' reported TMZ.

In the legal papers, Meyer claims he has been 'damaged' by the defendants' 'wrongful acts', which have prevented him from moving forward with the project about the Hollywood family. Meyer, who alleges he has been trying to get Being Sheen off the ground since April 2010, is asking for $ 20 million in damages in a suit filed in the Los Angeles County Superior Court on Tuesday.

It alleges, 'Starting on January 4, 2010, Defendant Carlos Irwin Estevez, along with co-conspirators Martin Sheen and Janet Sheen, all non-parties to the Reality Show deal, did internationally and tortuously: threaten, interfere with and restrain, and also conspire to: threaten, interfere with and restrain the Plaintiff's reality television project starring their relative Joe Estevez, titled: About The Sheens aka Being Sheen aka Sheen Reality, thus destroying the contractual relationships and damaging the Plaintiff Ed Meyer.'

But Sheen's lawyer Marty Singer rubbished the claims, telling the Hollywood Reporter, 'This is the most ridiculous lawsuit I have ever seen in my 30-year career. My client doesn't even know who this person is. I'm confident the case will be dismissed.' 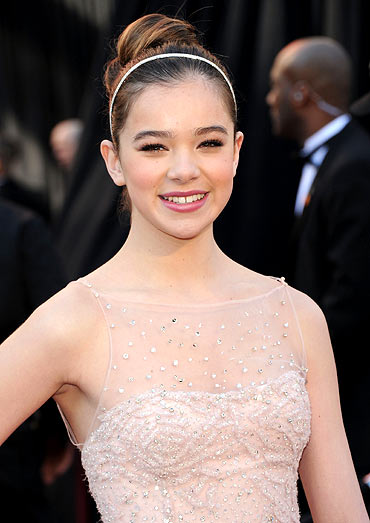 Image: Hallie Steinfeld
Photographs: Jason Merritt/Getty Images
She won an Oscar nomination at the age of 14 for True Grit and now Hailee Steinfeld is set to play Sleeping Beauty in a re-take of the classic fairytale.

The actress, who won over the critics with her turn as a young girl seeking revenge for the murder of her father in the gritty Western, will now play a princess, reported Daily Mail online.

The new version of the film is being written by screen writer Lindsay Devlin. The new version will give the star more to do than just sleep as it will follow her as she enters a dream world and has to find her way out.

Steinfeld is also currently being considered to play the lead role in the novel-based film Forgotten, from the upcoming book of the same name by Cat Patrick. After being one of the youngest ever actresses to be nominated for an Academy Award at this years Oscars she is set to have a busy year with several other offers on the table.

The young California native had only starred in several television bit parts before landing the lead role in the Cohen Brothers adaptation of the classic John Wayne western True Grit alongside Jeff Bridges.

Justin Beiber to make his movie debut with Ashton Kutcher 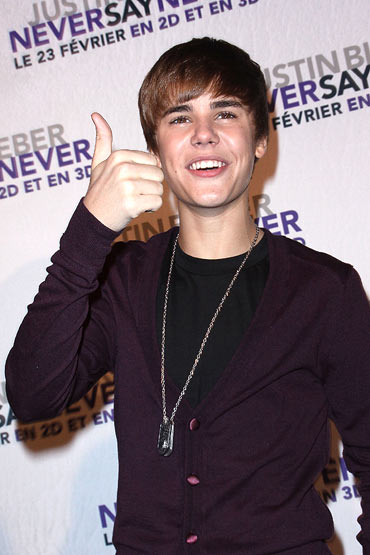 Image: Justin Beiber
Photographs: Marc Piasecki/Getty Images
Justin Bieber is reportedly bracing up for his movie debut alongside Ashton Kutcher. Titled What Would Kenny Do?, the film is about a teenager who meets his 30-something-year-old self.

The 17-year-old pop star will reportedly play a teenager who meets and is guided through high school by his thirty-something self (Ashton) who comes back from the future .

The project -- which was developed by Sony with Justin in mind -- will be produced by Ashton's Katalyst Entertainment and Will Smith's Overbrook Entertainment.

It was slated to begin shooting this year but the Baby hitmaker's touring commitments have reportedly pushed a shooting date back to 2012.

Hugh Jackman not giving up on Wolverine sequel 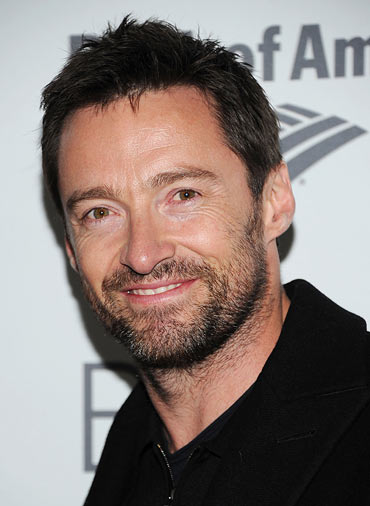 Hugh Jackman has spoken out to allay fears that his second Wolverine movie is in trouble, claiming it is still on track to be made.

The project was thrown into jeopardy by the departure of director Darren Aronofsky and the recent disasters in Japan.

The Australian actor is due to reprise his role as the clawed superhero for a sequel to 2009's X-Men Origins: Wolverine, which will see much of the action set in Japan.

Jackman insists that studio bosses at Fox are pressing ahead with plans to secure a new director despite the inevitable delays to filming.

'So now we're out looking for a director. We were pretty much ready to go. The script is fantastic -- the best we've ever had,' the Daily Express quoted Jackman as telling Coming Soon.