Sign in  |  Create a Rediffmail account
Rediff.com  » Movies » Anil Kapoor: I'm very confident about myself as an actor 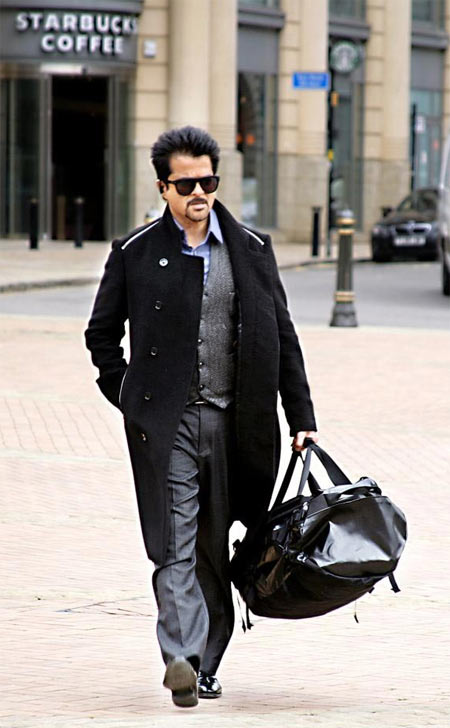 The actor returns to action with Tezz, releasing this Friday. But Kapoor doesn't think it is a big deal for him for he claims to have done it all before too.

In this interview with Sonil Dedhia, Kapoor talks about why he values his relationship in the industry, how his wife Sunita has been a support system throughout his career and daughter Sonam's career.

The actor also feels that the latest Kapoor boy, Arjun Kapoor -- who debuts in Ishaqzaade this summer -- has a bright future ahead.

How did Tezz come about?

When Priyan (director Priyadarshan) offered me this film, he told me, 'Anil, I promise I won't let you down'.

This is Priyan's ambitious project and he wanted me to be a part of it, so I readily agreed. Going by his promise, and I feel he has succeeded in fulfilling it.

The general perception is that 'slow and steady wins the race', while your film Tezz (fast) contrasts with that saying.

'Slow and steady' is just a saying now. The world has become too time-sensitive. Everybody wants everything fast.

People's patience level has reduced. Earlier, we used to have a film at least of three hours. Raj Kapoor's Sangam had two intervals and it was a roaring success. But today, people want a film that conveys everything and yet entertains in two hours.

'I have always tried to do things that people follow' 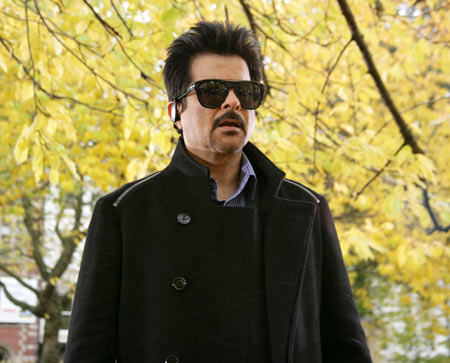 Was Tezz a way for you to do as much action as you can before you get older?

You are right in a way, but it also depends on how you look at it. Aging is a very natural phenomenon. What you could do 20 years ago, you cannot do now. So you have to change with time.

What you try to do is, at the stage you are in, you try to do things that suit you and what you're capable of and sometimes try to stretch yourself.

You are doing a lot of 'action' in your films. After Tezz, you have Race 2 and Shootout At Wadala. How do you manage to be so fit?

I have always done this kind of films. My films like Tezaab, Rakhwala, Kishan Kanhaiya, Laadla, Meri Jung, which were big blockbusters, are highly dramatic action films of the sort being redone today as Singham, Bodyguard etc.

For other actors, all this kind of action is new, but not for me. I have always tried to do things that people follow.

When My Name Is Khan or Koi... Mil Gaya released, people said there are similarities with Ishwar. In fact, I have worked with stunt directors like S Viajayan much earlier.

'I don't go by Priyadarshan's hit and flop ratio' 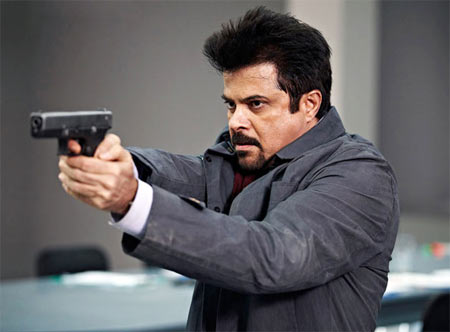 I did Tezz only for Priyan because I had confidence in him as a filmmaker. I wouldn't do this for anyone else. I am confident about his talent. I don't go by his hit and flop ratio. That would be very stupid, selfish, and inconsiderate.

I have overcome that stage where I'll fret about my film working at the box office or not, whether the script is good or not. If I am sure of a filmmaker, I go ahead with the film.

I am also very confident about myself as an actor and when you are so sure about yourself you don't think about these things.

Did you have to work hard on your character?

It depends on the character. For certain characters you work hard, some come very easily. For certain scripts I have to do a lot of research to get into the skin of the character. In certain films like No Entry, which is a comedy, one has to be very spontaneous.

You have to go on doing various roles so that your audience doesn't get bored of you.

You are also foraying into television with the series 24...

I am waiting impatiently for the shooting to start. The series has earned recognition worldwide and I want to bring this show to our country with a very Indian twist to it.

There are reports that you aren't playing the character that you did in the American version. 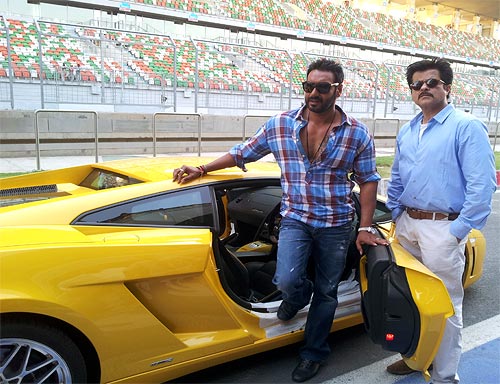 After a long time, a Kapoor boy (Arjun Kapoor) is entering the film industry. How are you finding him on screen?

He looks great, there's an ease in his performance and he is very comfortable. I have seen the trailers and he looks very promising. And, of course, whose blood line does he belong to? (Laughs)

My career was like that and so was the case with Sonam. Sanjay Leela Bhansali launched her.

'Sunita has sacrificed a lot for me' 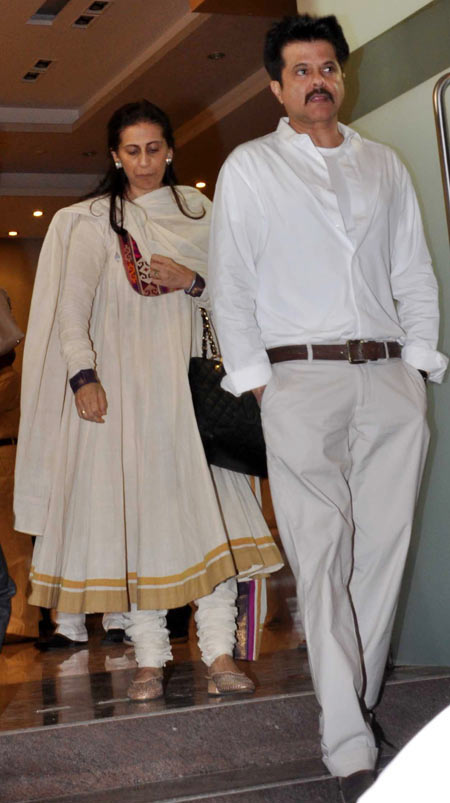 Your wife Sunita Kapoor has never been in the media glare. Why is that?

It's a decision she made long ago, that she'd stay away from the media. Her world is her family and she dotes on them.

She wanted to do things like a commoner -- go to Dadar to buy flowers, or Crawford market to buy fruits. She didn't want to be dependent on others, especially me, as I cannot go to a lot of places.

Recently, the BMC put a case on me. For everything she went to the court. Nobody knew who she was. That is the support I receive from her. If she too had been a media figure then it would have been very difficult. So, she has sacrificed.

So she has been a good homemaker...

Yes, and I think that is a much bigger profession. But she has worked hard simultaneously also. She's into clothes and jewellery, but not as a main profession. She was a working woman when I met her.

'Sonam has an inherent sense of fashion' 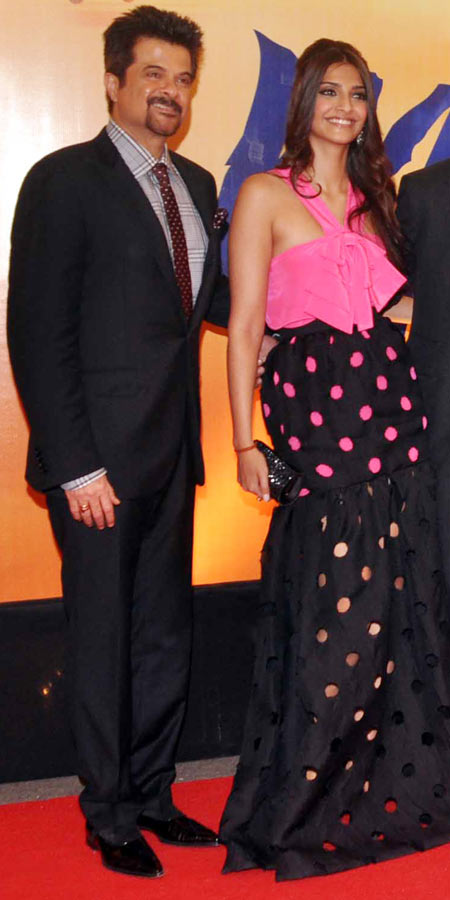 What do you have to say about Sonam's innings in the industry?

It's fantastic. She has put in a lot of hard work. My struggle was different. Her struggle is to match up to people's expectations as she is the daughter of a celebrity.

I think the struggle of a star kid is far more because even if they do anything good they won't receive the deserved acclaim. People usually love underdogs.

After my first film, people said I will give Amitabh Bachchan a run for his money. But it doesn't work that way. There were other actors too, but since I was the underdog, I was more appealing.

Does it bother you that the focus is more on Sonam's clothes than her acting?

After Saawariya and Delhi-6, people said she is doing behenji roles and should wear some modern clothes. When she did Aisha, they said she should de-glam. So it's just a passing phase. This is all media created.

She is smart enough to understand that this should not be taken seriously. Since she is my daughter, she does get scrutinised a lot more than others.

Looking fashionable all the time is also a great art. She has an inherent sense of fashion and she is mostly right in what she wears.

What are you doing on the production front?

We have bought the rights of a book called Herogiri. The script will be ready very soon.