Sign in  |  Create a Rediffmail account
Rediff.com  » Movies » Ajay Devgn: I have broken all the bones in my body 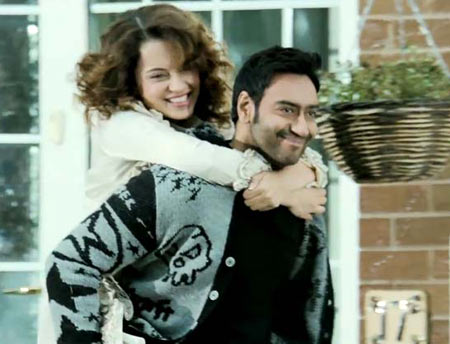 Image: A scene from Tezz
Patcy N in Mumbai

Ajay Devgn was shooting for his film Bol Bachchan in Wai, a town in Maharashtra, when Patcy N met up with him for a chat. Here's what transpired.

It's unusual for an actor to give an interview for one film while he is shooting for another but it did not pose any problem for Ajay Devgn. He quite readily gave an interview for his upcoming film Tezz on the sets of his other film Bol Bachchan.

It helps that he is a major star for such things to happen. But also, the director of Bol Bachchan -- Rohit Shetty -- is one of his close pals.

The friendship stems from the olden days when their fathers -- action director Veeru Devgan and stuntman Shetty -- worked together.

Ajay has starred in every one of Rohit's seven movies.

On the sets of Bol Bachchan, junior artistes dressed in colourful Rajasthani attire, complete with camels, were wandering about. The film has been largely shot in Jaipur, and some patchwork scenes are being shot here -- which explained the Rajasthani look.

Besides Devgn, the new version also stars Abhishek Bachchan, Asin and Prachi Desai. It's not a "ditto copy," Ajay informs. For instance,he plays Utpal Dutt's character -- but even though Dutt played the girl's father, Ajay plays the girl's older brother.

But enough about BB.

I was here to talk to Devgn about Tezz, and after a lavish lunch (rajma, dahi pakoda kadi, dabba ghosh, chicken biryani, chicken kababand gulab jamun), got down to business.

"Tezz is an emotional action thriller," Devgn tells us. "People think I play a terrorist in the film, but I don't.The story is of an emotional man who is out for revenge against the system, but he doesn't want to harm anyone.

"I would call my character positive; sometimes people do wrong because of circumstances, but they change. My character is like that, he doesn't want to harm anybody."

Anil Kapoor plays a cop in the film, who is after Devgn. Zayed Khan is helping Ajay in his mission and Kangna Ranaut is his wife.

'Tezz is not inspired from Speed' 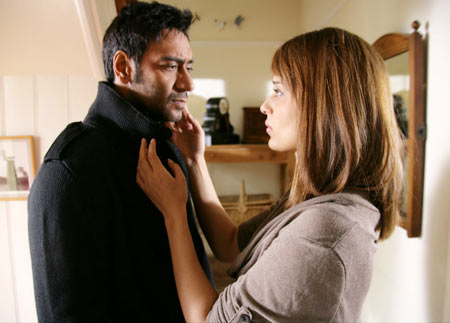 Wasn't there a problem between Kangna and him during their last film together, Rascals?In fact, Kangna was not even part of the film's promotions because of it.

Ajay denies it. "There was nothing printed about Kangna and me in the papers. If there was anything printed, it was about Sanju and the producers (Sanjay Ahluwalia, Vinay Choksey) and Kangna. I did not have any differences with her."

Right, so let's get on to another member of the cast. This is Ajay's second film with Mohanlal after Company, "but, unfortunately, I don't have a single scene with him in Tezz. We did meet in London, but did not shoot together. He is a great guy and a fabulous actor," is Ajay's verdict.

Is Tezz inspired by the Hollywood film, Speed?

"Everyone thinks Tezz is inspired by Speed because of its name, but it is not. They have nothing in common."

Ajay Devgn started his career with the action film Phool Aur Kante, and is back doing action films after a long time with Singham and now Tezz. Is this his favourite genre?

"I am enjoying returning to action films. I have always loved doing action, but now I am trying to get a good balance between action and comedy. I want to try out different genres. If I repeat myself, it becomes boring. There is no one particular genre that I enjoy doing."

The stunts in Tezz are choreographed by Gareth Milne (Bourne Identity, Bourne Ultimatum, Fantastic 4: Rise of the Silver Surfer and National Treasure: Book of Secrets) and Peter Pedrero, stunt co-ordinator of The Bourne Supremacy and the Harry Potter series.

The kind of stunts he is doing in the film will be "very English style thrills,more chases;there is a hand-to-hand fight as well but you will see more stylised stunts.

"There is a chase in the film where a car, helicopter and bike are involved. In this scene my character is on the bike and he is chased by a police helicopter and cars."

'20 years ago, we did stunts without safety cables' 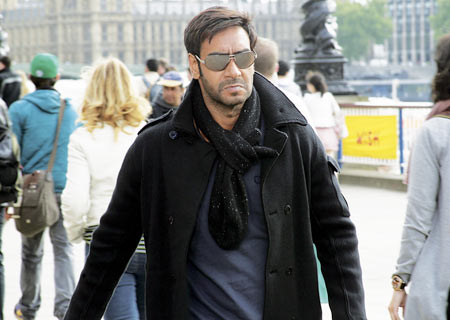 Ajay says he did not have to train for any of his stunts, but all the stunts were challenging. "The way foreign stunt directors conceive a shot is different from how we do it here, so it looks completely different.

"They plan a lot and give lot of time to rehearsals and their safety measures are better than ours. I feel our technicians are equally good and they work equally well, but due to lack of planning and facilities, they can't do much."

When he started out 20 years ago, stunts were much more dangerous. "We did all the stunts ourselves, without safety cables. If we had to jump from the third or fourth floor, we jumped without any cables, onto the boxes, and we would often be hurt.

"I have been injured lots of times. I have broken all the bones in my body and fractured my hands and legs.

"Still, even today, I would love to do the Phool Aur Kante kind of stunts on two bikes, but I am not sure I still can."

Filming for Tezz began in October 2010 and the film has not released yet. Ajay blames the English weather for the delay.

"The whole film is shot in London. We started the shoot in 2010 but for six months we couldn't shoot because of the cold. We could go there again only in June 2011 and we finished the film by July 2011. The rest was post production work."

Priyadarshan is known for his comic films, so why agree to do an action film with him?

"I think all the action films made by Priyadarshan are better than his comic ones, be it Virasat, Gardish, Kalapani, or even Aakrosh, which had a good subject, but was too long and too arty, which is why it did not work," Ajay replies.

'I don't know why item numbers are necessary' 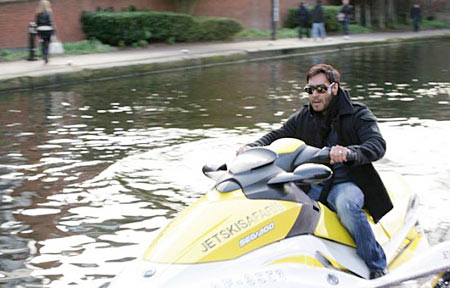 Does he get involved with the characters he plays on screen?

"I don't think you can ever get involved with your character. I think if you try to connect, it will affect you mentally. I don't get involved or connect with the characters that I play. It is an actor's duty to perform a character which is not like him in real life. If you are the same person in real life, then what is the fun in doing it?"

Tezz has an item number, performed by Mallika Sherawat. Why are item numbers so important in a film?

"I really don't know. The problem is our system is wrong. We have to promote a film for three to four months. In Hollywood, every film will just have one or two promos.

"Here, we make five to six promos and then we have to add a song to one of the promos. Music is an inherent part of our culture, so if there is no other way to put anything then it is an item number."

What's his take on the race for number one position among the Khans when he himself has been consistently delivering hit after hit?

"I don't care about that. As long as you are doing your work and you know you have the maximum hits, and you know what you are and the audience knows, then that's what matters," he says.

Sanjay Dutt is very upset that the film Rascals bombed at the box office and apparently wants to make another film with Ajay. "That's very sweet of him, we are working together in Son Of Sardar (produced by Devgn) and we are trying our best to make a good film," Ajay says.

'I don't attend awards functions, and so I don't get any awards' 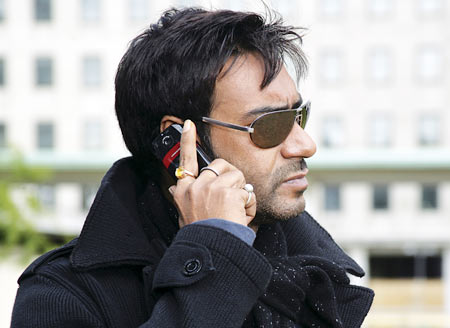 He is clear that only commercial films do good business. In the last two years, only masala films have done well, the kind of films that were made in the 1970s and 1980s, he says.

"In the 1990s, we felt our industry should do well and we have to move ahead with the times so we started making different kinds of films, and even art films. But in the last two years, films like Dabangg, Singham and Once Upon A Time In Mumbaai have come out. People love them and they are doing well."

Ajay mocks the so-called 'chemistry' between co-stars. "I don't believe in chemistry. I don't understand why actors say that my chemistry is good with so and so actor. It's all rubbish. If you do your work honestly and your co-star also does a good job, then you have chemistry.

"I feel timing should be good between two actors, like Sanju and I have good comic timing."

Despite several of his movies being box office hits, Ajay hasn't won any popular filmi awards. There's a reason for that. "I don't perform at awards functions, I don't attend awards functions, and so I don't get any awards.

"It's a fact, they call up and they ask you if you are coming then we will give you this award. I don't go so I don't get."

He last directed a film, U Me Aur Hum in 2008, and isn't planning to direct one any time soon.

"I am too busy to even think of directing a film now. I have a story and I want to direct, but I'm not getting any time. I need at least eight months to a year free from any other work to do it.

"If I try to multitask, there will be too much pressure," says the man who seems to be able to handle a lot of pressure on screen.