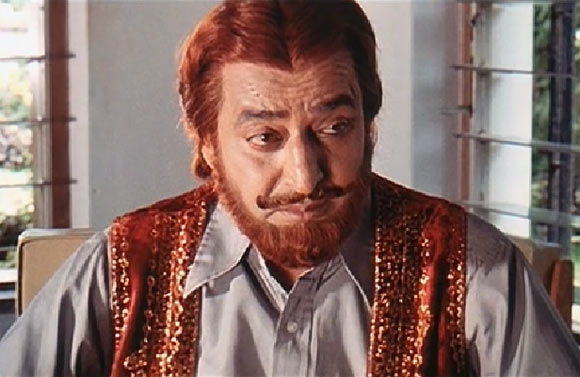 Continuing our special Nostalgia series on veteran actor Pran, we bring to you the excerpt from his biography, ... and Pran, written by Bunny Reuben.
One of the most popular actors of his time -- both on screen and off it -- Pran's biography has quite a few interesting and informative anecdoctes in it.
One of them is -- as director Prakash Mehra says -- if it wasn't for Pran, Amitabh Bachchan's first hit Zanjeer would never have been made.
We present you the excerpt:
Had it not been for Pran Saab, Zanjeer would never have been made; it would have remained a dream.'
That was the very first statement which producer-director Prakash Mehra made when asked to reminisce about the making of his superhit film, Zanjeer.
Prakash Mehra's association with Pran was relatively new: Pran had worked with him in only two films until then: Aan Baan and Ek Kunwari Ek Kunwara. Watching him work in Aan Baan, Prakash Mehra had already been impressed by his dedication to work.
Aan Baan had a twist wherein Pran, who plays Rajendra Kumar's brother, does not know that the girl he is to marry is actually his brother's sweetheart. The entire scene of the elaborate marriage sequence was to be shot with Pran on horseback. During the picturization of that sequence, he had to even give the 'long shots' without the use of a 'double'? It was a long shot involving a whole lot of junior artistes crowding in the verandas of the houses on both sides of the huge street set. The hero, Rajendra Kumar had to sing the song 'Lo Aaye Hum Dulhe Bhaiya Ke Baraati Banke's as the baraatis proceeded down the street.
Talking about it to a film journalist years ago, (the late) Rajendra Kumar said: 'Pran Saab is so dedicated to his work that never did he ask to dismount. He sat the whole day on the horse in that heat -- and he never once lost his cool!'

'Pran saab is a man of strict principles' 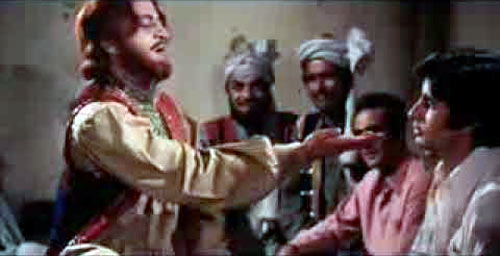 Pran had proved that he was one hassle-free artiste who would give his directors consistently good work. So for his own film, Prakash Mehra decided that he would like to have Pran in a key role.
As Prakash Mehra elucidated:
Though both Pran Saab and I had been in the movie industry from long before Zanjeer, it had been just a "hi-hello" kind of interaction. Although we had worked in Aan Baan and Ek Kunwara Ek Kunwari before, I was just the assigned director in those films. What better common ground than working closely together on my own film in order to grow close to one another?
'Pran Saab -- as I was to learn when the time came to plan Zanjeer has always been a man of strict principles.
'Let me explain... About the same time that we started the groundwork for the film Zanjeer, Manoj Kumar was also working on his film, Shor. I had heard the script of Zanjeer narrated by Salim [and] Javed and while listening to the character of the Pathan in it, the image of Pran came to my mind because I had seen his work in Chhalia in 1960. I therefore immediately approached Pran Saab for that role -- and he accepted.'
'After Pran Saab had said "yes" to the Pathan's role in my Zanjeer, I heard that Manoj Kumar approached him a few days later to do a similar role...in Shor. It must have taken a lot of courage to say "no" to Manoj Kumar, who had, not very much earlier, given Pran that memorable role of a good man in Upkar,' Prakash Mehra observed.
Pran reportedly told Manoj Kumar that he would work in Shor should Prakash Mehra decide not to make Zanjeer. But both knew that the likelihood of that happening was virtually nil, since Prakash Mehra's recent films like Haseena Maan Jayegi, Mela and Samadhi had all become jubilee hits!
Tags: Prakash Mehra , Manoj Kumar , Pran Saab , Zanjeer , Haseena Maan Jayegi

'Manoj Kumar felt bad because after all, he had given me Upkar' 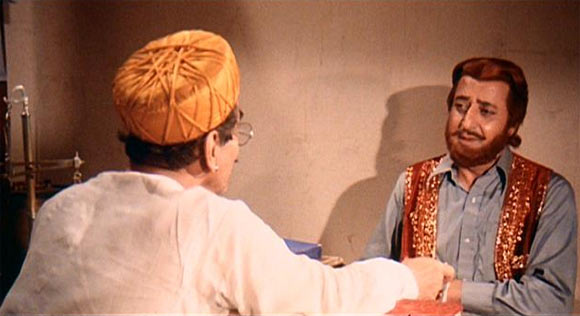 Image: A scene from Zanjeer

Recalling what happened in an interview to Cine Blitz (December 1989) Pran said: 'I enjoyed working with Manoj Kumar.... Unfortunately, I didn't work with him after Upkar and Purab Aur Paschim. When he was planning Shor, he did come to me and asked me to playa Pathan in the film. But I had to refuse the offer because I had already agreed to play one in Prakash Mehra's Zanjeer. And I didn't want to be unfair. He felt bad because after all he had given me Upkar. I think till today he's annoyed. But if he sits down and thinks, he'll realize how right I was.'
However, it is interesting to hear what Manoj himself had to say about Pran's commitment, which, in the case of Manoj Kumar's Shor,happened to come up against the actor-film maker's own sense of commitment: 'Since I was so close to Pran, I asked him to hear the story of Shor'
When asked about the story, Pran reportedly told Manoj: 'It' s difficult to make.' Continuing his narrative, Manoj said: 'So I asked him, "Pran Saab, what's the point in making an easy film? There's no fun in it." Later on, he telephoned me and said: "Panditjee, don't mind. Can you please change that character of the Pathan to somebody else?"
'I asked: "Why?" "I have already agreed to do a film of Prakash Mehra and I am doing the role of a Pathan in it. I am committed," he told me. To which I replied: "Pran Saab, I appreciate your commitment. You are committed to Prakash Mehra and I am committed to my script. I cannot change it. So, no ill feelings."
'We took Premnathjee instead. This makes people think that something has gone wrong between Pran and Manoj Kumar. But it's not like that. The very third day, he was sitting at my house and hearing the story of Dus Numbri. I appreciated him for saying that he was already doing a Pathan role. But I needed a Pathan for my film. Pran Saab is a man of principles! I had my own commitments which he too appreciated."
Not only was this refusal a matter of principle that Prakash Mehra had approached him first, but also the other reason why Pran had turned down Manoj Kumar needs to be mentioned here.
Tags: Pran Saab , Manoj , Upkar , Mehra , OPran Saab

'Pran Saab helped me in many ways in Zanjeer' 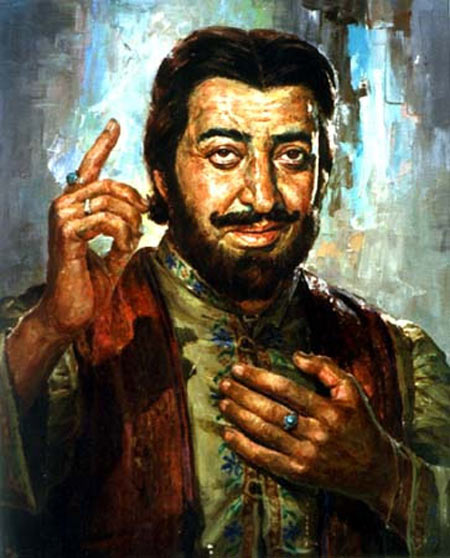 Image: Potrait of Pran from Zanjeer

The unique factor about Pran's career always was that he tried never to repeat a 'get-up' or character. If he had to accept Manoj's offer, it would mean doing two Pathan roles in quick succession, since both films were being made almost simultaneously.
Although the stories of both films were substantially different, Pran reasoned that the Pathan character would be similar and, after all, how many different ways are there in which to play a Pathan? Inevitably, with the simultaneous filming and the similar characters, it would not be inconceivable that certain repetitions in delineation of the two characterizations would creep in. Therefore, Pran explained his stand to Manoj and rejected his offer.
The moment Pran accepted Zanjeer, he went much beyond himself, far beyond merely visualizing and preparing for his own role.
He went out of his way to help Prakash Mehra in some other important ways as well.
'Pran Saab helped me in many ways in Zanjeer,' Prakash Mehra recounted. 'For one thing, we were not able to finalize a hero, so Pran arranged a meeting for me with Dev Anand Saab, whose Kala Pani I had seen.
'When I had seen Kala Pani, I had strongly felt that the role he played in that film would transform Dev's entire image -- from the song-singing, goody-goody hero doing light, romantic roles to something far more impactive. '
When Prakash Mehra mentioned that he was considering Dev Anand for the hero's role in Zanjeer, both Salim and Javed felt that it would be a case of total miscasting.
Prakash Mehra continued: 'I had already paid three visits to Dev Saab and had narrated the script to him; then Dev Anand mentioned that he should be given two or three songs to sing in the film. I said: "No Dev Saab, this character will not be singing. This is not that kind of character."
'Dev Saab immediately said: "Alright Prakash, you do one thing. This is a beautiful subject. You give it to me. I'll make it in Nav Ketan and you direct it - and I'll give you whatever money you want."
'I laughed and said: "Dev Saab, I have come to give you work - and now you are offering to give me work!" We both laughed and parted as friends.'
Tags: Mehra , Zanjeer , Dev Anand Saab , Kala Pani , Pran

'Dhamendra was to be the leading man of Zanjeer' 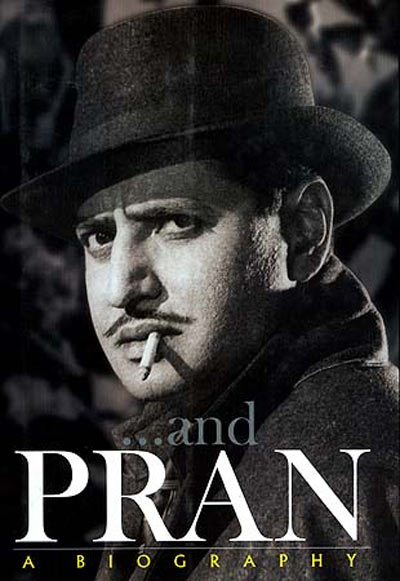 Image: Cover of the book ... and Pran

There was, of course, another reason why Prakash Mehra refused to hand over the subject to Dev Anand. It had to do with an earlier arrangement Prakash Mehra had had with Dharmendra!
Prakash Mehra, by virtue of a verbal commitment made earlier, was bound by an understanding with Dharmendra. 'He and I were partners,' Prakash Mehra revealed. 'The story had been bought by Dharmendra, who was to be the leading man of the film.'
However, Dharmendra had other commitments and so, although their partnership was dissolved, he let Prakash Mehra use that story.
The story of Zanjeer was then narrated to Raaj Kumar, who in his classic style said: 'Jaani, this is my kind of subject. I was once an inspector in Mahim. But for this film, you do the shooting in Madras!' When Prakash Mehra explained that the story's setting was in Bombay and that it would be impossible to shoot a film like that in Madras, Raaj Kumar also declined to do the film.
This business of finding a leading man for Zanjeer was going from perplexing to annoying. Prakash Mehra had by now considered three heroes and he was getting increasingly frustrated about not yet being able to zero in on the right candidate. Besides, rumours had already spread about his not being able to decide on a hero for Zanjeer.
Pran's younger son Sunil (Tunni) was working in Madras and staying with his friend Ajitabh Bachchan, whose elder brother was already in films. When he heard from his father that Prakash Mehra was looking for a hero for his new film, he told him: 'Dad, I have a friend who is in films. Though his recent films have flopped, this guy is real good.'
That hero was Amitabh Bachchan, who had started his career with K A Abbas' Saat Hindustani, released in 1969, and had done an excellent cameo in Sunil Dutt's Reshma Aur Shera, released in 1971. Though Hrishikesh Mukherjee's Anand was the third film he had signed, it was released earlier in 1970, and became a hit.
Getting in touch with Prakash Mehra, Pran told him: 'You go and see Bombay to Goa. It's recently been released. I haven't seen it myself but you check out the hero in it. My son Tunni is praising him a lot.'
Tags: Prakash Mehra , Dharmendra , Raaj Kumar , Reshma Aur Shera , Madras
More