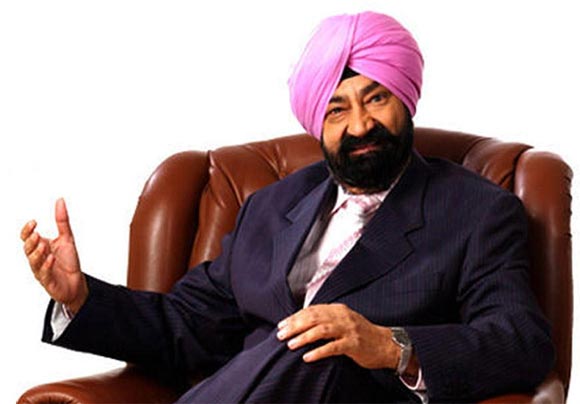 Bollywood stars tweeted their condolences for well-known comedian Jaspal Bhatti, who passed away due to a car accident on October 25. Bhatti was 57 years old.

Riteish Deshmukh tweeted: 'RIP Jaspal Bhatti- Super Hit man from d FLOP SHOW- worked with him in my debut film Tujhe Meri Kasam-humble kind, happy, funny and helpful. one of the first ppl to entertain audience with his political satires. Condolences to the family- a big n untimely loss.'

Akshay Kumar wrote: 'Saddened to know about the death of the great comedian, Jaspal Bhatti. I have fond memories of his super hit show, Flop Show, providing the much needed humour in our lives. May his soul rest in peace.'

Kunal Kapoor wrote: 'Really sad to hear the news about Jaspal Bhatti's death.. What an incredible entertainer he was.'

Ronit Roy wrote: 'In london,Jaspal Bhatti once asked me"Kya piyoge"Ireplied"kuch nai"and he put a bottle of scotch called "Kuch Nai" in front of me! RIP Sir!'

Anupam Kher tweeted: 'Just Landed in Mumbai and came to know about my friend Jaspal Bhatti's tragic death. Why is God taking away all d nicest people. So SAD. I used to tell Jaspal Bhatti that he does fantastic comedy so seriously. He was also a great supporter of anti corruption campaign. RIP.'

Manoj Bajpayee wrote: 'My deepest condolences to late jaspal bhatti's family!may god give them strength to bear this sudden loss !may bhatti saab rest in peace!'

Madhur Bhandarkar wrote: 'To make people laugh is an art & Jaspal Bhatti mastered it. RIP Bhatti ji, may god give strength to your family.'

TV actor Karan Kundra tweeted: 'A father dies on the day he launches his son.. I feel immensely sad! RIP Jaspal Bhatti Ji! You & your work shall be missed!' 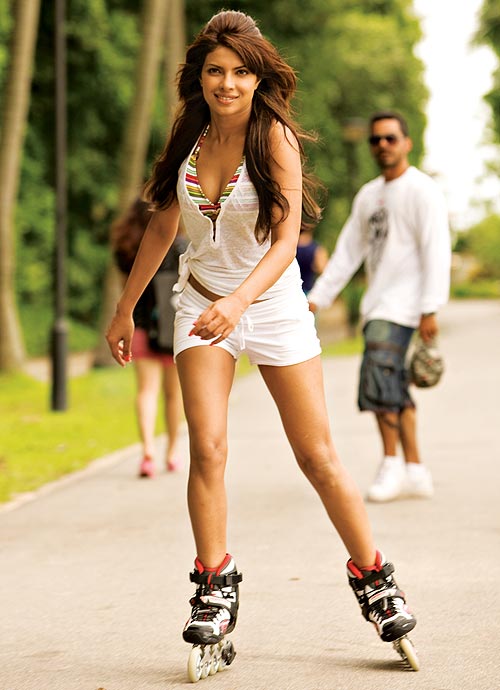 Priyanka Chopra, who has worked in Pyaar Impossible opposite filmmaker Yash Chopra's son Uday under the Yash Raj Films banner, replaced a Barfi! act at an awards show with a tribute to Yash Chopra.

She also tweeted her condolences: 'Writing cause I have an upheaval in my heart..was doing a Barfi act for People's choice awards but since yashjis passing its like my childhood is over..been rehearsing for a befitting shradhanjali to Him.when I was a kid every time I saw the beautiful Juhi in darr of Lovely Madhuri in Dil Toh Paagal Hai or my fav Sridevi in lamhe or chandni I used to start pretending to be them..id steal my moms white saree and stand in front of a table fan and dance as if I was doing toot gayi toot ke main choor Jo gayi with my hair flying..I pretended as if I was being serenaded by the man of my dreams... My one regret.. My one wish.. Yashji will never say action to me..my life as a Hindi film heroine will always be incomplete..I remember him laughing at me when I used to tell him about my obsession with his films..would anyone capture a woman's beauty and heart the way Yashji did..? I Doubt.. But all ill say is.. Life is too short to keep wishes in ur heart..wish I'd told him I wanted him to just say action once to me..I'd walk in the background for him..I wish Jab Tak Hai Jaan so much success from my heart and I'll vicariously live my incomplete Yash Chopra dream through @iamsrk Katrina and Anushka.... Live out ur wishes..make ur dreams come true..fight for them..life is too short to take it for granted.. Sorry for my ranting..had to vent.'

How these stars celebrated Dussehra 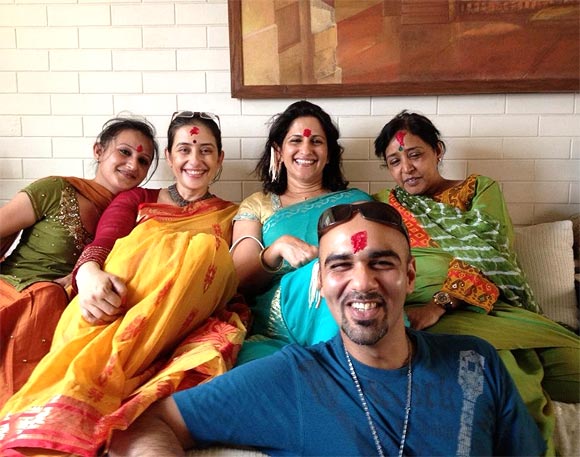 Manisha Koirala celebrated Dussehra with her friends and shared a picture (above) on Twitter.

Raveena Tandon constructed the effigy of Ravana with the help of her family members. 'Finally its done..we wrote lil notes of all the negative things that we wanted out of our lives and stuffed in ravan. So that it burns away all the negativity..my friend shradhas idea,' she tweeted.

Mini Mathur also constructed a statue of Ravana with husband Kabir Khan. 'Today @kabirkhankk @jaya_misra n I along with a lot of junior helpers constructed a giant Raavan. Delhi Childhood fun!' she tweeted.

Amitabh Bachchan went out for dinner with his family. 'Home at last ! Drove out with kids for dinner ... stuck in worst traffic jam .. Dashera and Durga Visarjan .. cops pulled me out !! The streets filled with rejoicing and music and dance..anyone visiting first time would think India to be on party mode perpetually. What a wonderful release for those that seldom get to celebrate .. long may this tradition continue,' he wrote.

Singer Shaan celebrated the festival with music composer Wajid Khan. 'Had a very Special Dushera today.. Celebrated with a song sung by me and My Boys!!! God Bless my Bro @wajidkhan7,' he tweeted with a picture of them. 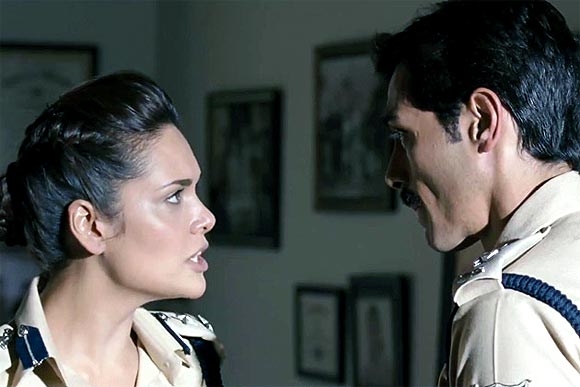 Farhan Akhtar is planning to watch the film soon. 'hearing great things about your film Joe... congratulations to all. Waiting for my day off to go watch it,' he tweeted.

Arjun Rampal thanked everyone for the feedback. 'Thank you, fantastic responses, reading them and retweeting as many as I can. Fingers crossed, hopefully it reaches out and brings a change.  Thank you all for the responses on #Chakravyuh has been beyond amazing. TY with all my heart. Its so encouraging,' he tweeted. 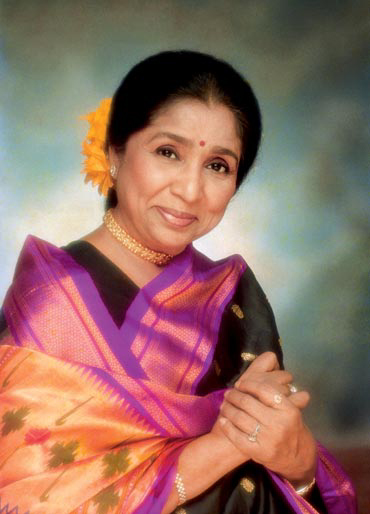 After losing her daughter Varsha Bhosle and dear friend Yash Chopra, singer Asha Bhosle decided to visit her family house in Goa and take a few days off.

'I've returned home to my fathers birthplace where it all began. It's peaceful here. I'm in Goa. Thank you to you all for your support,' she updated. 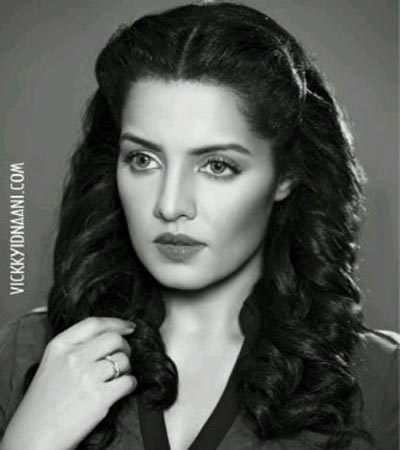 Celina Jaitly shared a picture of her new look and tweeted: My fav shot from my new shoot ..what do u think of my new looks tweeps ?? Xx'

Sunidhi Chauhan shared a picture from her concert in Chennai and wrote: 'WHAT A SHOW CHENNAI!!! I went MAD on stage because of you all:). You BLEW ME AWAY! Thank you Indian Express team :)'