By Sukanya Verma
Last updated on: April 27, 2007 18:44 IST
Cheering can be a lot of fun. In movies, it has the power to do miracles, especially when the man, you are rooting for, has so much at stake.


Siddharth Anand's Ta Ra Rum Pum plays on every human's ultimate fantasy to conquer against all odds and take home the trophy. Here the trophy stands as a metaphor for the realisation of one's most precious dreams. And that is precisely what makes Ta Ra Rum Pum a universal subject to identify with and feel for.

But for god's sake, it's a Yash Raj Film. And so even if a story about inspiration and hope, it is bound to be lavish, stylish and commercially viable.

For starters, it's set in New York City. What's new, you ask? Hasn't Karan Johar made a career out of making films based in NYC?  True. What is new is Anand's vision of the most populated city of The States. Not only do you get to do some fresh sight-seeing but also innovative angles of oft-repeated locations like Brooklyn Bridge and Times Square.

Also, car racing is the basic premise of the story. Expectedly, there is a whole lot of vroom-vroom going on all through the movie. True blue racing buffs might not feel the rush of adrenalin on witnessing the tackily executed chase. But folks not too familiar with NASCAR will enjoy just the same.

Like every story, this one has a hero too. Rajveer aka RV (Saif Ali Khan) makes a dashing entry; a la Tom Cruise in Top Gun, helmet in hand, against the violent strumming of an electric guitar. Only our man started out as a pit stop tyre changer.

His racing skills impress a cabbie Harry (Jaaved Jafferi in his best Gujarati speaking accent goes in for a swell image makeover) and they strike a deal with Billy Bhatia's (Bharat Dabholkar) company Speeding Saddles.

During his winning spree, the carefree RV also hits it with the fastidious Radhika (Rani Mukerji). He calls her Shona because 'it's Bong (Bengali in slang) and sweet, and so are you'.

RV proposes to Radhika with Tiffany, a Merc and a mansion in Manhattan -- all of which is irresponsibly purchased on loan and installment, if you are the one for details. Soon they have two kids, with nicknames that'd have you mistake them for a horse -- Champ (Ali Haji) and Princess (Angelina Irani) and an Irish Setter, Bruno.

All the adulation makes RV feel over-confident about his game. In trying to fool around and entertain the crowds against his closest competition, RV makes a faulty move resulting in a major accident. After missing out on a whole year, he gets back into the action, nonetheless scarred from his previous experience. His poor performance on the track leaves him jobless, homeless and bankrupt.

While RV never stepped inside a university, Radhika never finished her degree post-marriage. Silly move, we think. Lack of proper education forces the two to take up low-end jobs and shift to a rundown desi neighbourhood. While the children are made to believe their new impoverished status is a play and part of a reality show, Don't worry. Be happy. And though it's not mentioned, we believe RV was definitely a fan of Roberto Benigni's Life is Beautiful. 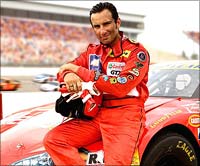 Eventually, RV has to take a stand, which means an edge of the seat contest from start to finish and, of course, lots of cheering.

The sentimental turn in Anand's story is heartfelt. But what is particularly appealing that none of the characters crib or mope around. Instead, they tackle every problem with resilience and humour. Sure, kids will be kids and occasionally sigh at the sight of creamy puffs and spicy hot dogs. Aww moments aside, generally, there is a positive vibe running through this family and the film.

The foursome make a happy picture hopping inside the enormous Disney store. Speaking of choreography, Vaibhavi Merchant infuses an impressive rhythm and frolic in the movements. Almost every song and dance is a pleasure to watch.

If Salaam Namaste (Anand's directorial debut) was inspired albeit cool, Ta Ra Rum Pum is inspiring and sweet. The filmmaker has a knack for bringing wit in woe. He does that here too, admirably. Though I have to say, how come RV enters a racing competition whenever he feels/needs like/to? Isn't there supposed to be a schedule calendar or something?

That's what makes Saif Ali Khan indispensable. His spontaneity is utterly disarming and distracting. He plays RV -- a huge racing star, with amusement as if to say 'big deal' not losing his boyishness even during stressful times. Hence, his breakdown scene is particularly effective.

Rani Mukerji's Radhika is a confident lady. There is a certain polish in her taste and thoughts. Self-assurance comes naturally to the actress. And for this role, she makes the most of it. Also, there is just one word to describe Surily Goel's wardrobe for Rani: WOW!

The kids, Haji and Irani, are cute and exude confidence.

Essentially, Ta Ra Rum Pum is a feel-good family entertainer with good looking actors, thrilling car chases, playful melodies (Vishal-Shekhar) and pretty visuals. Then again, there's lot more beneath. It talks about taking responsibility for one's own problems instead of finding an easy way out. It packs in a lot of optimism and grace, especially in the way new age parents are depicted. Even if in passing, the fast-growing obsession and dependency on plastic money and installment schemes is mentioned as well.

Any film that makes you feel good about life and prioritises hope over struggle is worthwhile. Ta Ra Rum Pum brings a smile to your lips and song to your heart.

Sukanya Verma
SHARE THIS STORYCOMMENT
Print this article
Rani: It's lovely playing a Bengali
'Saif is like a part of me'

Saif: I want to be better than Rani