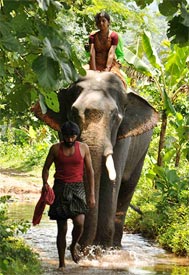 A film about the emotional bond between a mahout and his elephant, Pavithra Srinivasan says that Kumki is an unforgettable ride through the wilds of Tamil Nadu's virgin forests.

Director Prabhu Solomon love affair with hills and forests might explain the inexplicable magic that permeates every scene of his movies.

Viewers who welcomed his Myna might have expected him to fall into the 'great anticipation' trap with Studio Green and director Lingusamy's Kumki, but thankfully, both for our sakes and his, Prabhu Solomon has managed to avoid the trap and deliver a beautiful love story in the wild.

Besides the hero, there are two others who walk away with the honours in this film: the elephant Manickam around whom the film revolves, and cinematographer R Sukumar, who brings us the visual treat of the Theni Hills.

The simple story is about a mahout Bomman (Vikram Prabhu) who comes to the wild, untamed, and beautiful forests of Adhi Kadu (in the region of Panimalai, Marthandam), to prevent the attacks of a wild elephant known as Komban who has been causing devastation in the area.

In the first scene we are introduced to the mammoth destruction wrought by the elephant and this sets the tone for the first half.

The twist in the tale is that while Bomman has brought his trained elephant Manickan and his assistants (Thambi Ramaiah and Aswin) to guard the villagers' harvests and fend off the wild elephant, they know that Manickam is not really a fierce animal capable of teaching Komban a lesson. Manickam is, in reality, very timid, even shying away from breaking coconuts!

Bomman has no intention of carrying on his charade for more than two days, but something happens to change his mind: Alli (Lakshmi Menon), the daughter of the chieftain Mathaiyan walks into his line of sight, and life changes completely.

His attraction for her forces him to stay on in the village that expects him to save them from a gory death and provide them a safe harvest. But Bomman has no idea how he is going to do this.

The visuals are astounding. D Imman scores with melodious songs such as Onnum Puriyalai, Sollitaale Ava Kaadhala and Ayyayyyayo Anandhame, which work perfectly with the movie and linger on in memory.

Vikram Prabhu does a good job in his debut film, and seems at ease with his elephant. Their scenes together work well, which is important since their relationship is the focal point of the movie.

Lakshmi Menon looks fresh-faced and plays her part well. Plenty of screen-space has been given to Thambi Ramaiah, who scores with his comic one-liners, although these get repetitive after a while.

Credit undoubtedly goes to Prabhu Solomon for picking a storyline that catches our interest, and sustains it. The lives of tribal villagers with almost no contact with the outside world, is depicted convincingly.

This isn't to say that Kumki is completely without faults. The second half of the movie loses its momentum a little, walking away from the Komban storyline and focusing almost exclusively on the romance, which seems to dilute the proceedings.

More attention to how Bomman deals with the menace of wild elephants might have been more interesting.

The dialogues, songs, Sukumar's cinematography and the plausible storyline all come together to make an interesting film set in a wonderful location. A must-watch. 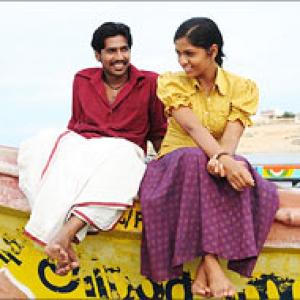 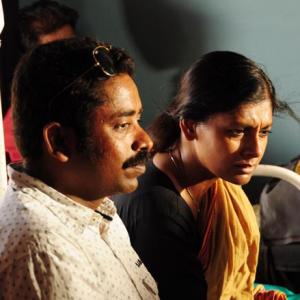 'Neer Paravi is about the struggles of fishermen'