Review: Annakodi is a disappointment 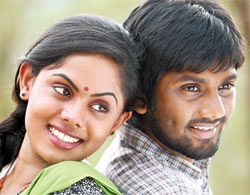 S. Saraswathi says Annakodi lacks depth and fails to ignite the passion needed for such an emotionally compelling love story.

His last film, Bommalattam, a suspense thriller starring Nana Patekar released in 2008 and was a huge commercial success.  And now almost 5 years later, this National Award winning director is back with what he does best, a village centric love story, Annakodi.

Bharathiraja has chosen his protégé Radha’s daughter, Karthika Nair of Ko fame to play the titular role of Annakodi in the film.  Debutant Lakshman Narayan plays the male lead as Kodiveeran, incidentally the film was initially titled Annakodiyum Kodiveeranum and later shortened to just Annakodi. The film also features director Bharatiraja’s son Manoj Bharathiraja, in the role of Sadayan , the lead antagonist. The film is produced by Bharathiraja himself and is distributed by their home banner, Manoj Creations.

Poignant, beautiful love stories set in villages are Bharathiraja’s forte and Annakodi too is one such tale.  Kodiveeran, a goatherd, meets and falls in love with the neighboring village belle, Annakodi.  Sadayan is the son of the village moneylender, who confiscates people’s houses and land and also carries away their women, claiming them to be the interest for the money borrowed.

Sadayan too is attracted to the beautiful Annakodi, who thwarts his advances and insults him at every opportunity.  Meanwhile love blossoms between Kodiveeran and Annakodi and encouraged by her love, Kodiveeran, who is a son of a shoemaker belonging to a lower caste compels his father, to ask for her hand in marriage.

Annakodi’s mother is enraged by their insolence, as they belong to a much higher caste, and disgraces them.  The villagers beat up the father and son and hand them over to the local police, who are in cohorts with Sadayan.  Kodiveeran is now booked for a theft he did not commit and sent to jail.

Unfortunately while he is jail, Annakodi’s mother meets with her death in an accident and leaves her daughter at the mercy of Sadayan, from whom she has borrowed a lot of money.  With Kodiveeran in jail, and her mother dead, and no support from the villagers, Annakodi is forced to marry Sadayan.

So what happens to these poor helpless lovers separated by not only by caste and creed barriers, but also by cold and heartless humans.  Are they destined to live without each other or does fate intervene and they have a happy ending, is what forms the rest of the story.

Bharathiraja’s films are known for their soulful music and beautiful lyrics. And with young sensation, GV Prakash composing for the film and legendary Vairamuthu and Gangai Amaran as lyric writers, Annakodi does have some beautiful melodies that capture the essence of the rural setting, creating the perfect atmosphere.

It is well known that Bharathiraja prefers to work with unknown faces, molding and transforming them into wonderful actors.  Karthika Nair looks very pretty sans makeup, in fact in many scenes she reminds us of the young Radha in her earlier films. Karthika has been given a meaty role and does full justice to her role.  The rest of the cast also have performed adequately, Manoj Bharatiraja clocks in more minutes than Lakshman Narayan and though not very impressive, he definitely has done his bit.

The second half of Bharatiraja’s Annakodi has a lot of twists and turns. There is a surprise element, lots of violence, sentiments, and of course death and somehow amidst all this, all the love and romance in the film is lost. Most of the tender moments between Annakodi and Kodiveeran is depicted in the form of flashbacks and lacks depth, failing to ignite the passion needed for such an emotionally compelling story. It certainly does not do credit to this master storyteller.

Though the film unfolds at a decent pace and has lots of elements, Bharathiraja fails to bring out the pathos needed to engage and involve the audience.

After giving hit after hit for almost three decades, besides being recognized at the national level, certainly more was expected from someone who has given us a Muthal Mariyathai and 16 Vayathinile.