Review: Breaking Dawn 2 is for Twihards ONLY! 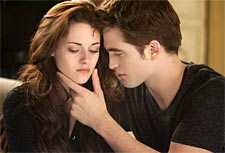 Fairy-tales are often criticised for pigeon-holing the heroine with a one-dimensional, unambitious and soppy temperament. Her only ever agenda is to somehow acquire a smitten Prince Charming, kiss his perfectly-etched lips and fulfill her ultimate destiny of a happily-ever-after.

But like time and technology, priorities and passions too have changed. And so it's particularly nauseous to endure the stereotype of Bella Swan and her demure desires film after film since the adaptation of Stephenie Meyer's The Twilight Saga became a hot-selling movie franchise hailed by mush-infected teens and tweens.

Obviously, neither the series nor its source is targeted at the no-patience-for-giddy girls-obsessing-over-pale, pretty vampires. Only this absurdity in the garb of Kristen Stewart's leisurely glances at a shimmering Robert Pattinson and confused fondness for Taylor Lautner has gone on for too long and too slowly.

At a time when even Disney's animated heroines like Rapunzel, Tiana and Merida have more personality than Bella, it's perplexing to understand her under-achieving attitude. And still, over the past four films (Twilight, New Moon, Eclipse, Breaking Dawn-1), Stewart's introvert demeanor and delicate screen presence has served her well in conveying the adolescent fantasies of silly Bella towards Pattinson's stunningly handsome centenarian bloodsucker.

In the previous edition of the final book, also directed by Bill Condon as is the concluding chapter, Bella marries her eternal soulmate Edward, they enjoy a lavish honeymoon in Brazil and she's immediately pregnant with a potentially lethal baby. Following a gruesome labour/transformation sequence, she delivers a half-vampire, half-human baby girl who is immediately imprinted by her werewolf admirer Jacob.

In part two of yet another Melissa Rosenberg's adapted screenplay, Bella changes dramatically. And it's not just the red eyes and sparkling vampire complexion.

The usually subdued Stewart delivers a Razzie-worthy performance with a bizarre combination of over-the-top histrionics and blank expressions. Even her feisty moments, whether she's leaping mid-air to pounce on a ferocious beast or arm-wrestling her brother-in-law (Kellan Lutz, who by the way is wearing so much white make-up, you could confuse him for a mime artist), Stewart is unbelievably comical. Her romantic interests don't have much to do since she's already married one and dumped another. So while Pattinson wears an amused air, Lautner is reliably ineffective.

Unless you're a hardcore Twihard, Breaking Dawn 2 feels unbearably sluggish and puerile when it strives to create a notion of gravity wherein the Cullens gather assistance in the form of foreign relatives from Ireland, Russia, Egypt and Amazon to withstand the Volturi intimidation. If the the cultural stereotyping and wooden humour isn't jarring enough, there's an entire battalion of terrible actors to contend with.

Having said that the grand finale of Breaking Dawn redeems itself and its tedious, not-so-better half with its display of unanticipated imagination. Namely an elaborate, high-energy battle sequence involving heads being popped out like doll figures and a wild, tricky surprise twist.

Condon wraps up this saga of loony aspirations amidst immaculate/sculpted supernatural creatures on a pleasant note, offering its newcomer-turned-superstar leads a befitting farewell with a glaze of gooey, inevitable nostalgia against a field of those oft-visited violet flowers and Carter Burwell's endearing soundtrack.

Forever, he says with a twinkle in his eyes. Forever, she reciprocates in her wispy little voice. Forever, I sigh looking at my exasperated watch one last time. 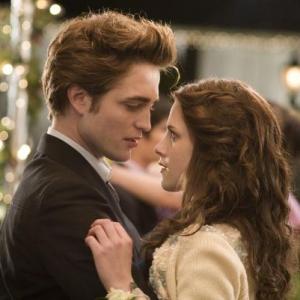 The Twilight Saga: The Story So Far 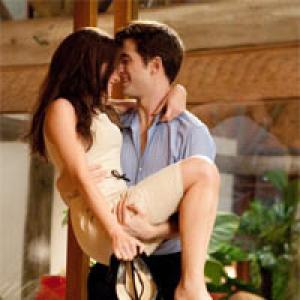