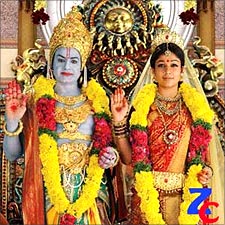 As mythological films are a rarity these days there were high expectations for Sri Ramarajyam. More so, since it is a Bapu-Ramana film.

This is an epic one in terms of its subject matter and production values. For it's sheer visual grandeur to the eyes -- harking back to the times when such films were made.

This mythological extravaganza is really rich and one must compliment the producer Yalamanchili Saibabu for deciding to recreate the Ramayana on celluloid and ensuring that the magic is created with the efforts of the Bapu-Ramana combination.

The familiar story is taken from the Uttarakhanda. The film begins with the arrival of Rama (Nandamuri Balakrishna) and Sita (Nayanatara) in Ayodhya after vanquishing Ravana. However, the happiness is short-lived. A pregnant Sita (played by Nayantara) is driven out of the palace on the statements of the washerman and she is left near Valmiki's (Akkineni Nageswara Rao) ashram by Lakshmana (Srikkanth).

Sita seeks refuge there and the twins Lava and Kusha are born and trained by Valmiki in music and warfare. We all know what happens next.

Director Bapu and his co-writer Mullapudi Venkat Ramana (who incidentally passed away during the making of this film) have made quite a few films on the Ramayana. Sri Ramarajyam is another addition to their filmography.

In this film, they have ensured the essence of the story and the simplicity in language in order to reach out to all. Though the film is about two hours and 45 minutes long, in order to do justice to the epic, the director has ensured that the screenplay has all the arresting elements.

Bapu has ensured some humour too with the character of Bala Raju (Hanuman in disguise). The film has the right blend of emotions which can keep the audience glued -- particularly the second half. Bapu has retained the authenticity. Valmiki and Sita's roles are written well in terms of the emotion quotient too.

The screenplay is enhanced with the settings, the music and the SFX. With such magnificent sets of the palace and the darbar halls (by Kiran) and the simple ashram sets (done by Ravinder) they are able to captivate the audience.

Ilaiyaraja's music is a great asset. The music is not just mellifluous to the ears with some good lyrics by Jonnavithula but is absolutely in sync with the film. Ilaiyaraja is known for his melody and he's proved he's definitely a master of melody.

The SFX is another highlight and has been done skilfully.

It's perhaps the role of a lifetime for Nandamuri Balakrishna as he stepped in to play a mythological character. He tried to be restrained as possible and play it with conviction. With his late father NT Rama Rao essaying numerous such puranic and godly characters, it's but natural that comparisons would be made. Balakrishna has tried to be Maryada Purushottam Rama though he may not be in the same vein as his late father.

Nayanatara is the surprise package of the film. As Sita, she too has played the role of her lifetime. She gave a fine understated performance conveying a kaleidoscope of emotions.

Akkineni Nageswara Rao brought dignity and elegance to the role of Valmiki. No one but him could have played the sage better. Srikkanth as Lakshmana stood out particularly for his pathos in the scene where he leaves Sita in the forest.

Vindoo Dara Singh as Hanuman, KR Vijaya as Kausalya, Sameer as Bharat, Roja as Bhudevi, Brahmanandam as the washerman and Jhansi as his wife were convincing. The boys who played Lava and Kusha and Bala Raju did a good job as did a host of others in the film.

Kudos to Bapu and Saibabu for recreating the Ramayana magic on celluloid. Only Bapu, the veteran director, could have executed this mammoth task so well. Sri Ramarajyam is an optical feast. Go for it. 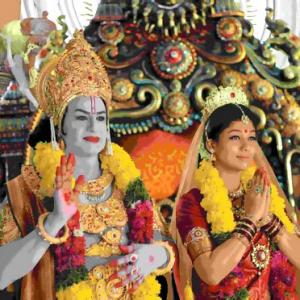