Review: Skyfall is the best Bond film in decades 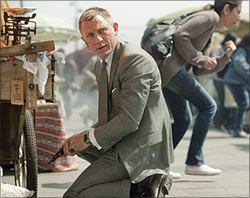 The new James Bond villain -- played by an alarmingly bleached Javier Bardem -- is a man given to both dramatic nuance and pomp, who describes catastrophes he can engineer with muted 'pop' sounds instead of the big booms they doubtless are, like champagne uncorked at a distance.

He is as fantastical an adversary as any Bond has ever had, an ice-cold creep with delicate flair and a touch for the big occasion: brilliantly apt, then, for James's golden anniversary.

What he -- and crackerjack director Sam Mendes -- have laid out for Bond isn't the most comfortable of birthday parties, however, and Daniel Craig's James, already looking rather the worse for wear, is made to leap through many a spectacular hoop. He is also made to drive Range Rovers and drink beer, poor fellow -- before Mendes, with a knowing wink that fixes everything, puts him in The Greatest Car In The World.

And we immediately know that all -- after the Octopussys and the Quantums and the Brosnans and the Lazenbys -- is well again, England's most celebrated secret agent is in good hands.

The plot, mildly referencing Wikileaks -- what if Julian Assange was a despotic maniac who once used to be a better spy than Bond? -- is as wonderfully preposterous as ever, and Mendes has a dashed good time with the characters, making sure Craig's Bond, Judi Dench's M and Bardem's Silva are all given their moments in the sun.

Cinematographer Roger Deakins (synonymous with the Coens but who also shot Mendes' Revolutionary Road and Jarhead)  shoots Turkey, Shanghai, London and Scotland lusciously and evocatively, his compositions simultaneously and unerringly rejoicing in both old and new. While often frantic, the film never feels rushed or incoherent, Mendes and Deakins frequently soaking key scenes in beautiful silence.

When that theme tune isn't playing, that is. There's a whole lot for Bond to do here, and Craig is the right man for the job.

Credibly tough enough to gun down a garrison, Craig gamely shoves his way through an emotionally-charged narrative, only slightly faltering at making his punchlines land as well as his punches do. Either he delivers the line too drily, or the line seems too uncharacteristic from a man that solid. He is a top actor, however, and the England that belongs to Bond fans is safe with him in charge.

And, when spurred on by a truly electrifying exchange -- as with Bardem, who lays into him with homoerotic glee in the film's best scene -- Craig does indeed give as good as he can get. 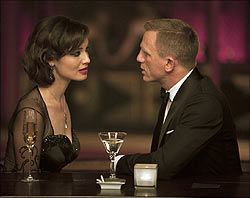 Bardem is a master performer, an actor who frequently has to outdo not just himself but outrageous hair, and is here tremendously enjoyable. As loathsome as he is compelling, Javier creates a Bond villain grand enough to root for -- and impossible to forget. Not least because of his mouth that, for one surreal moment, takes us back to Richard Kiel's character Jaws, from Moonraker and The Spy Who Loved Me.

Which is because Mendes is clearly having a rollicking time playing join-the-reference. From visual cues to major plotpoints, much is affectionately appropriated in the name of Queen and country. There are nods to The Godfather, the Get Smart television show, several great Bond moments, Psycho, a cavernous Batman backstory, and even a climactic set-up considerably like Home Alone. This is most definitely a party. Mendes even cheekily underscores his nods: a mockup of M's face appears in a visual clearly inspired by The Sex Pistols' God Save The Queen album cover seconds before Dench herself, emerging from her Jaguar, indignantly exclaims "God save me!" Well played, sir.

Dench, ever a strong actress, is mostly fine here when reprimanding Bond or quoting Tennyson, but the film sees her M go from coffinnail-hard to dishcloth-soft, and the inconsistency mars the performance a tad.

All the women are problematic, actually, with Berenice Marlohe's Severine proving to be one of the weakest actresses Bond's bedded. Naomie Harris does repartee wonderfully, and knows her way around a razor, but the opening scenes have her in an action sequence where her urgency appears almost cartoonish. Perhaps Bond is right; not everyone is meant for life in the field. Even though Harris does get the last laugh.

So, then, just how well does it stack up, this Number 23? Good enough to wear that hallowed name on its jersey, for sure. Despite what you may have read, though, it isn't quite as magnificent enough as those timeless first three films -- Connery's insouciance seems perhaps an unfair advantage, but the balance those films achieved between smarts and spectacle remains amazing, and there is so much to quote, to remember, to obsess over -- but it stands very tall indeed, towering over the last two decades of Bond-films quite easily.

Skyfall is, at heart, a crowdpleaser. The first three Bond greats -- Dr No, Goldfinger and From Russia With Love -- were like big-band flourishes, clever and symphonic and throbbing with energy: jazz, played loudly and fearlessly.

Sam's film, which deserves actually to be the first of at least three, isn't as resonant or as original, but it is fabulously refreshing and light enough to have heads bobbing along, chorally humming the theme. It may not be jazz, but like its villain demonstrates, sometimes all we need is -- *pop*. The SEXIEST James Bond of them all! 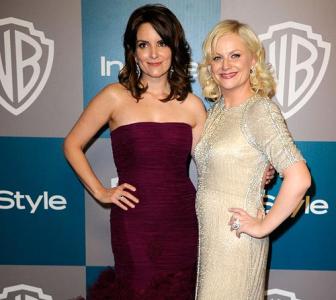 Skyfall: The finest Bond film ever?