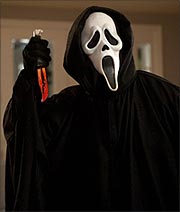 When you have nothing new to say, it's best to not say.

That's precisely the case with Wes Craven's fourth instalment of the slasher series he launched in 1996. It simply recycles old devices and scare tactics and bunches them together like a fresh flower bouquet, looking enticing but smelling stale.

Scream's first and second part established a sort of brand reputation resulting in box office frenzy but it soon became victim to its own hype, thereof nose-diving in content and creativity.

The director himself commented that he didn't wish to make a fourth version. After watching it, you know what he meant and why -- the conviction that Craven demonstrated in the first two parts, counting the path-breaking narrative that held your interest, is missing in the new franchise.

Scream 4 has every ingredient that a horror experience warrants but no thrills that could lift it. Those who've seen the first Scream were impressed with its movie awareness through those ingenious send-ups on Halloween and Friday The 13th and even its satirical mention of Tom Cruise and other movie in-jokes.

Obviously inspired by his own ingenuity, the director employs the same meta-referential treatment here which does more harm than good to the brand-building pinnacle Scream reached in the 1990s. The references don't work within the current context -- look rather forced -- in sharp contrast to the movie-star allusions that did wonders to the first film.

The recurring question, 'What's your favourite scary movie?' sounds good only once; after repeated hearing it reverberates irritably in your ears and throbs like drumbeats in your brain.

So, how has Craven chosen to take the plot forward? The celeb victim Sidney Prescott (Neve Campbell) is back in scaredom during the jittery times when the town is on the cusp of the notorious Woodsboro Murders anniversary. With her arrival, it's obvious that the Munchian-masked Ghostface, too, would make his infamous presence felt. It goes without saying some of the popular characters reappear, such as Dewey Riley (David Arquette, the new sheriff now) and journo Gale Weathers (Courteney Cox).

There's a buzz about Scream 4 and it is likely that fans of the series won't miss out on it, especially because it comes to them after a wait of a decade or so. Honestly, it does have its high points, certain thrilling moments here and there which terrorise you, make you jump up and instinctively slap your palms to acknowledge your excitement over those scenes.

The problem with Scream 4 is that it stretches its movie-within-movie mask a bit too much and in doing so, those 'ironic in-jokes' that Roger Ebert referred to in his earlier review, Craven forgets that he's here to give us scary moments, scary enough for us to include Scream 4 into our 'favourite scary movie' list. 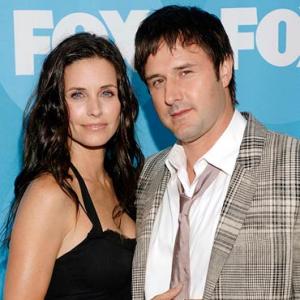