Review: Krrish 3 is a colossal waste 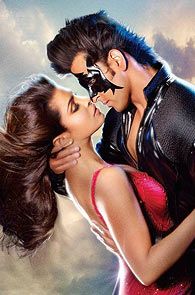 Raja Sen says the only superpower Krrish has is that of boring the audience.

If your idea of a fantastic time at the movies involves Hrithik Roshan wrestling with a man’s tongue, then, my friend, you’re in for a blessed treat at the movies this week. Ditto if you’re a retailer of friendship-bands.

The rest of us, on the other hand, best stay away from this beastly big-budget juggernaut, a film ostensibly made for kids but one so abysmal that you should be most concerned if your children (or your nephews or your neighbour’s kids) want to see this. If they grow up actually liking movies like this, well, there goes the next bloody generation, conditioned for mediocrity from the get-go.

What if, for example, a child asks why Rakesh Roshan’s new film is called Krrish 3 when there is no Krrish 2 in existence? No reasonable answer exists, save the possibility that the new Krrish, for some oddball reason, is named after the number of thumbs its protagonist possesses. What the dashing young Krrish doesn’t possess is a power not to bore. In fact he — and his pot-bellied father, also played by Hrithik — are blessed with the ability to take a massively budgeted opportunity and suck it dry of all promise, leaving us with a Diwali release that can’t possibly be recommended for any reason whatsoever.

Look, I didn’t mind the first Krrish. It wasn’t a good film or anything, but Hrithik sold the character effectively enough to leave the door ajar for other Bollywood superheroes. One of the few that showed up, showered in hype, was Shah Rukh Khan’s catastrophic Ra.One, one of the biggest disappointments in movie history. Now, since it isn’t right to expect big-screen miracles from the man who made Koyla and Karan Arjun, the only reason Krrish 3 might escape being labelled as bad as Ra One is merely because expectations were lower: all we wanted was a fun film for the kids.

Krrish 3 — which ends up borrowing a whole lot from Ra.One, for the record — is not that film. There is no reason Indian children should be allowed to watch it unless tickets are sold really cheap, because the new Thor film releases next week and it’ll offer them a true superhero spectacle, with much more relative bang for their buck. There is much brouhaha about the visual effects in the new Krrish film, and while occasionally competent, they remain so dismally derivative of iconic superhero films that one can’t take them seriously. And the fact that the Pirates Of The Caribbean theme kicks in every time Krrish is in mid air doesn’t help. (Danny Elfman’s Spider-Man theme, conversely, plays whenever the hero’s truly tense. Every alternate scene, pretty much.)

So there are two Hrithiks, and its harder to say which is more excruciating. In one corner is old Rohit The Demented, a developmentally-disabled old man an alien refused to cure a couple of movies ago. If you close your eyes (which is not bad advice at any point during this film) he sounds like an Anil Kapoor mimic trying to do a very drunk voice. He’s a scientist, however, which means he is fiendishly smart and at least knows what he’s doing. His son, Krrish, has become bewilderingly stupid since we last met him, probably because the filmmakers want to make sure we don’t confuse his role with that of papa. There is thus much BigMoose-ian lumbering about in alarmingly tight vests, except when he’s Krrish and his jaw is perpetually quivering with rage. That or the mask is way too snug.

And there’s the baddie. “Fusion is the future,” says Vivek Oberoi’s Kaal, sounding for all the world like Bally Sagoo did back when he mattered. Immobile from the neck down, Kaal is a sinister mastermind who creates man-animal hybrids that lead to a bunch of poorly-constructed mutants with long tongues et al. Kangna Ranaut, for example, plays a shapeshifting creature born out of human and chameleon DNA. Many unanswered questions are born out of Kaal’s setup, the most crucial being why Ranaut doesn’t have a bad prosthetic orange forehead/nose like her fellow “maanwar” brethren, and who on earth has been applying the eyeliner for Kaal for all these years?

Still, a strapped-down Oberoi is mostly bearable even if he’s basically Magneto and Professor X rolled into one. Priyanka Chopra, who plays Krrish’s wife Priya, is anything but that, a shrill giggler with the most inane role possible. Ranaut makes the most of a far better part, and emerges the only plus in this C-minus production. She’s intriguing, she’s cold, she’s sexy and she holds our interest — at least till she randomly starts assaulting people with drop-kicks and even a Boston Crab. (Are you watching, Mr McMahon?)

The film is 152 minutes long, a fact corroborated by my wristwatch, but we might as well call Ripley’s. It stretches on forever, never amusing, never exciting, never anything but a wasted effort. The songs are almost intentionally horrid, each of them. Daftness abounds in every direction: the bad guys covered in green goop as if they just won Nickelodeon awards; scientists talk to themselves all the time and Surpanakha from the Ramayana is their first go-to example for mutation; a pregnant Priyanka is laid out on what has to be a funky ping-pong table; and there are hulking black statues celebrating Krrish — as if Mayawati’s taken a shine to the lad.

And twenty minutes of the film are spent in hawking Krrish-shaped wristbands that ‘make you a part of Krrish’s team.’ Krrish even delivers the “don’t try this at home” message in the flesh. It’s all very well until the climax, where a kid rebels against his mom who says they’ll give their lives for Krrish. No, exclaims he, we’ll take the villain’s life instead. Ookay then, that’s the message we’re going with. (And we thought Man Of Steel had an ethics issue.) Then Krrish shows up as the statue of liberty. It’s all positively krrishastrous.

Just stay away, will you? It’s the responsible thing to do. An empty wrist will serve you best. 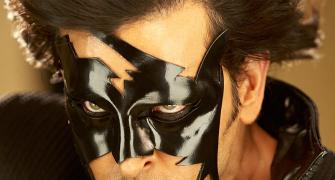 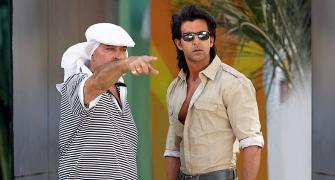 Rakesh Roshan: I can't imagine making a film without Hrithik
Priyanka Chopra: I feel awful when my films flop 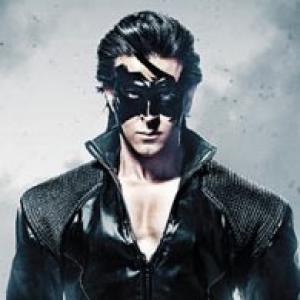