Review: KBC 7 is brimming with promise and knowledge 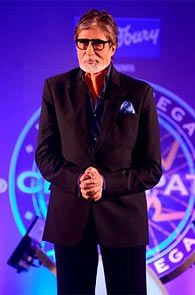 Kaun Banega Crorepati 7 can only get better after a promising first episode, says Sukanya Verma.

The superstar and his ‘shuddh’ Hindi return with Kaun Banega Crorepati, now in its seventh season (or sapthkoti as he likes to call it) in a slightly new avatar with a few significant changes. More lifelines, more questions and LOTS more money. Now, the fastest-fingers-first round includes three questions with the one who answers all three in least amount time nabs the hot seat spot, the participant can win up to seven crores by answering all 15 questions with five lifelines -- audience poll, phone-a-friend, 50:50, flip a question and Power Paplu (which can revive a previously used lifeline) at his/her disposal. The new format has done away with the expert opinion, which saves the show’s time from needless pleasantries. Also, co-participants (hot seat contenders) can play on the side and the one who answer maximum questions can win a sum of one lakh.

What hasn’t changed at all though is a) AB, delightful as ever, hosting the popular game show with the right amount of charm and authority and b) his interactions with the eager, excited hot seat contender.

The opening episode of the new season features a sprightly Sonu Nigam performing to a medley of Big B hits like Mach gaya shor (Khuddar), Yamma yamma (Shaan) and Yeh dosti (Sholay) with the actor too joining in to shake a leg and lending his voice to a song underscoring KBC’s harmonious spirit Chal pada apna saara Hindustan.

The concluding episode of the weekend showcases a colourful dance to mark the beginning of Ganesh Chaturthi festivities.

Last season’s Crorepati winner, Sammit Kaur Sahni also pays a visit on the sets to express her gratitude to KBC.

These interludes, however, don’t overstay their welcome with KBC intent on keeping its focus on the game and game alone.

I wasn’t too thrilled about the previous season’s distracting tone, which went overboard (and out of context) in trying to highlight its altruistic stature and the conditions of its deprived contestant.

Most of my complaints seem to have been taken care of this time.

Kaun Banega Crorepati is ultimately a knowledge/merit based quiz game and ought to be treated like one. The video clips are still there and sound rehearsed but, thankfully, they last only a couple of minutes.

There’s the bubbly Preeti Panwar who wants to travel with Salman Khan to Kerala, brings our attention to AB’s ornate shoes embellished with what resembles ‘dangling earrings’ or so she insists. The flamboyantly dressed 70-year is quite a sport about it.

Raipur's Sushma Mishra is a jovial housewife and her dream is to ride on a bike with John Abraham. Imagine her sweet surprise when the Madras Cafe star shows up to give her a bear hug on the show.

Mishra came to know her husband via a missed call but refused to reveal her identity till he eventually figured it out after seven sleepless nights and days. Hearing this, AB quips, 'Madam aapne meri saat raatein kharab ki. Main aapki saari zindagi kharab karoonga.’

AB delights Husain Moiz Soni by revealing he’s (also) a leftie like him. The actor is ambidextrous. The slightly tense Soni aka Husipedia loosens up during an Aashiqui 2 question when our star host remarks, ‘(Aashiqui 2), ya toh dekhi hui hai, ya kheli hui hai.’

He also instantly warms up to Bikaner’s Rajni Rajpoot's perky manners who tells him she’s connected to him via Facebook and reads out a sweet poem she’s written in his honour.

And there’s Uttar Pradesh’s Neel Kamal Singh going wild with enthusiasm on winning the hot seat. He literally leaps on a visible amused and shaken Bachchan. The wide-eyed player brags about winning five crores on KBC but ends up using audience poll in the very first question. Singh’s antics, however, have AB rolling in laughter. He can’t help ribbing the ‘Mahapurush’ and his ‘Dhanya’ better half.

In his gentlemanly style, Bachchan makes the participants, gushing or shy, feel special with genuine appreciation for their compliments (A Ghar Baithe Jeeto Jackpot player revealed to the visibly touched actor how she was a sixth grader during the Coolie accident and prayed for him regularly till he got better) and gifts (Mishra gifted him a todi, which he plans to keep in his temple at home. Rajpoot’s poem was graciously accepted with a promise to share it online.)

The seventh season of Kaun Banega Crorepati is brimming with promise and knowledge. It can only get better. 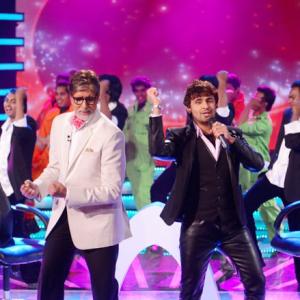 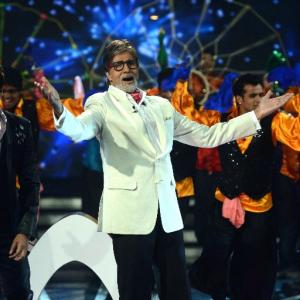