News
Business
Movies
Sports
Cricket
Get Ahead
Money Tips
Shopping
Sign in  |  Create a Rediffmail account
Rediff.com  » Movies » Music review: Grand Masti is NOT grand but has some masti

Music review: Grand Masti is NOT grand but has some masti 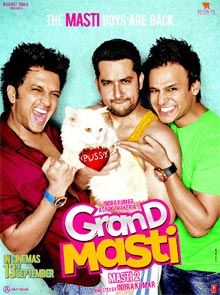 Though Grand Masti won't be memorable, it will be decent fun for the time it plays on screen, writes Joginder Tuteja.

Director Indra Kumar had some interesting music in his 2004 hit Masti. But the film's sequel -- called Grand Masti -- has nothing grand in it.

With a suggestive title like that, the music is expected to be unabashed and unpretentious. And it is.

The title song is a fast-paced, addictive club song, which is full of double meanings, thanks to lyricist Kumaar. The film's music composer duo Sanjeev-Darshan also sing this number with debutante Payal Dev.

The song appears again in a remix version, and keeps the temp up. The fact that it is choreographed in a vibrant manner enhances the song.

Manoj Darpan is roped in as a lyricist for Zulmi Zulmi, which features Indra Kumar's favourite composer Anand Raaj Anand.

Surprisingly, the song takes a good one minute before the hook-line arrives and brings rhythm to the proceedings. While the words Roshni Roshni that arrive at the beginning hardly entice, the overall sound of Zulmi Zulmi works

only on and off. An attempt is made to create something on the lines of Dil Mein Baji Guitar (Apna Sapna Money Money) but despite the presence of Mika Singh, one doesn't see a long lasting appeal here.

Kumaar returns as a lyricist with Anand Raj Anand's music in Tu Bhi Mood Mein. Wajid Khan (of composer duo Sajid-Wajid) steps in as a singer along with Ritu Pathak for this song, which is designed to step into the same space as On The Roof In The Rain, courtesy lyrics that go as Baarishon Mein Aaja Dil Wet Kar Le.

Designed for the front benchers, this out and out massy number takes one back to the 1980s. Though it is better than Zulmi Zulmi, overall, the song is strictly situational and one doesn't it see it going all the way, unlike Lara Dutta's seductive number from Masti.

Last to arrive is Grand Masti: Mash Up, which works primarily in the parts where title song Grand Masti plays.

Overall, though Grand Masti won't be memorable, it will be decent fun for the time it plays on screen.