It is a known fact that caste dominates the social spectrum of India. Also known is the truth that the inherent biases of caste and the notion of pollution-purity prevail even 60 years post Independence.

Set against the backdrop of the holy city of Benaras and the river Ganges, is the beautifully narrated Dharm. In an age where cinema has crossed shores and continents, Dharm takes the viewer on a journey of spirituality and the Brahmanical way of living.

The movie revolves around the life of Pandit Ram Narayan Chaturvedi (Pankaj Kapoor) and his family. Kapoor proves once again that he is among the best actors in the country today. Not only does he breath life into his character but also carries on with its ethos with utter disdain till the end.

With the premise of the movie being communal riots, this Bhawna Talwar-directed film is about the misinterpretation of religious beliefs, and how religion has been turned into a business by unscrupulous elements who mould it to suit their interests.

The daily schedule of Pandit Chaturvedi begins early. A religious bath before sunrise in the Ganges, chanting of shlokas along with his disciples and religious bathing of Lord Shiva are what kick-start his morning. The rest of his day goes in teaching disciples and performing his duties as the head priest of a temple. 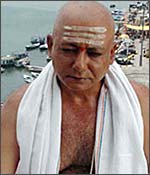 His duty-bound wife (Supriya Pathak) and daughter, follow Pandit Chaturvedi's footsteps and adhere to the norms laid down by scriptures on how a pativrata woman and an obedient child should live in Hindu society.

Their lives change when one day, a woman leaves her baby in the hands of his daughter. Pandit Chaturvedi's initial rejection and suspicion about the child's origins turns into acceptance as it comes down upon him that nobody may come asking for the child later on.

The first sign of changes in the conservative mind of the religious teacher appear here. However, the age-old dark aspects of caste return to haunt him. He subjects himself to numerous purificatory rituals and ceremonies. At the same time, a section of the youth in the city is being brainwashed by a communal force, which purportedly aims at purifying Hinduism by cleaning away the elements that threaten it.

As the wave of hatred continues, taking the life of numerous innocents, in the name of religion, the Pandit and his family wage a battle of their own -- the battle of conscience.

How Pandit Chaturvedi and his family copes with the challenges posed by tradition and customs and how even religion cannot escape the forces of change is what makes this movie worth a watch.

There are no songs in the movie. The background score by Sonu Nigam, which plays through the movie, has a soothing effect.

The picturisation and cinematography are also worth a mention. More so, unlike most films on similar lines, this one does not drag and keeps the viewer hooked on.

However, glitches remain. A movie, which says it is dedicated to those who lost their lives in riots, should have delved deeper into the hardships faced by the victims. True, the movie showed the hatred that communal forces had for the minorities but should not the director draw the camera to the other side of the fence as well?

Secondly, though most of the characters narrate their role well, they cannot hold the audience. This is something Pankaj Kapoor has in abundance. Also Mani (Hrishita Bhatt) the daughter of an upper caste landlord (ex-prince) who elopes with a foreigner due to family pressure and becomes a widow seems to be wasted.

Lastly, though the movie is thoughtful and insightful, it would not garner eyeballs. This was evident from the show I went for. I was alone in the 250-seater hall. In an age when movies are shot in foreign locations with senseless stories, Dharm will draw in much critical acclaim and less audiences.