By Syed Firdaus Ashraf
January 12, 2007 19:33 IST
Three people with different backgrounds come together in the quest for a rare pink diamond, that will change their lives forever.

One is doing this out of greed, to get out of the African continent; one is a journalist hunting for a 'blood diamond' scoop; and the third is doing if out of love for his son.

Blood Diamond is set up in the conflict zone of Sierra Leone, West Africa and begins with the journey of a fisherman, Solomon Vandy (Djimon Hounsou) who wants his son (Dia) to be a doctor after he grows up.

He gives his best to his son, but events wreck his life as rebel forces in Sierra Leone (Revolutionary United Front) capture Solomon and take him to a diamond mine where he has to work day and night in search of diamonds, alongside hundreds of other prisoners. Meanwhile, his son is separated from his mother and sisters as RUF soldiers capture him and then train in their army as a child soldier. 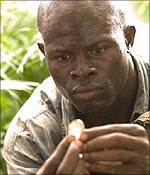 In the diamond fields, Solomon finds a rare pink diamond but before he can escape with it, he is imprisoned by government forces of Sierra Leone along with RUF rebels. He hides the diamond before he is arrested. A chance meeting with Danny Archer (Leonardo DiCaprio), in jail for trying to smuggle diamonds on the border of Liberia, changes his life.

Danny promises that if he gets the diamond then he will get his wife and child back to him. He has a beleaguered past because he has worked in Rhodesia (Zimbawe) as an ex-mercenary and now trades in diamonds to make a living. His aim is to finally move out the Africa continent.

After their release from prison the duo set on to find the pink diamond.

an idealistic American journalist in Sierra Leone out to expose the diamond industry's greed as they are financing rebel operations and also using child soldiers to make profit over principles.

The film now intertwines all three characters together. The Blood Diamond story is so realistic that it leaves a lasting impression about dthe iamond industry.

If you have ever bought a diamond or been gifted one, you are likely to start wondering whether big diamond companies are really involved in Blood Diamonds or 'Conflict Diamonds' as they are known in the diamond trade. Are they really using children like Dia as child soldiers to make profits?

Leonardo excels, and both Djimon Hounsou and Jennifer Connelly do full justice to their roles. Director Edward Zwick has told a very interesting and dark side of the diamond story -- it is no wonder the diamond industry is protesting this film outright, because they feel that their business will suffer due to the negative publicity.

The film may be hard to relate for urban audiences sitting in the comfort of air-conditioned theatres. The story is realistic, but there are very few lighter moments like the one when an old African man says, "Thank God, we don't have oil in Sierra Leone, otherwise things would have been bad."

If you are an avid watcher of realistic cinema, Blood Diamond is a must watch.

From Nach Baliye to Leo DiCaprio