Alien vs Predator battles to the top! 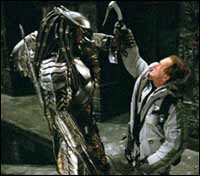 Distributor 20th Century Fox was confident of a big opening for Alien vs Predator. It was it was also sure the film would be trashed mercilessly by the critics. So it opened the fantasy adventure without press screenings.

Contrary to the notion that a distributor shuns the press only when the film is awesomely bad and is bound to disappear from the box office radar in a week, the movie opened big. It gave Fox yet another hit this summer following The Day After Tomorrow and I, Robot. All three films are driven by special effects.

Alien vs Predator -- in which the monsters from the two movie franchises fight each other for the first time on film -- could become profitable in about three weeks. The film opened to a $38 million weekend though it could come down by a hefty percentage next week, which happens with sci-fi and fantasy adventures. Yet the film, which cost about $60 million, might end with a neat profit from the American market alone.

In the movie, a team of scientists and adventure-seekers arrive in Antarctica where a pyramid has been buried for centuries. But the more amazing -- and terrifying -- discovery the team makes is that two alien races are engaged in a destructive battle.

Reviewers who caught up with the film on Friday -- most press screenings are held on Wednesday -- were busy writing nasty reviews just as thousands of moviegoers were recommending it to their friends.

'Alien vs Predator proves once again that it does not pay to double your trouble,' Michael Wilmington wrote in Chicago Tribune.

'The best parts of AvP, where the monsters actually start mixing it up, are amusingly garish, shallow and gory,' he continued. 'But the worst of it (most of the set-up stuff) is almost irredeemably awful. It's a murky, empty-headed dive into the depths of the Antarctic and the heart of monster movie cliches that leaves you praying for most of the cast to get killed off fast, to put them (and us) out of our misery.'

The film is a boost to the young career of Sanaa Lathan, who was seen last year opposite Denzel Washington in the ill-fated Out Of Time. She plays the kind of part Sigourney Weaver made famous in the Alien series. Lathan, who is certainly far more glamorous than Weaver, plays a tough mountain-climber guide in the film.

Another critically panned movie Princess Diaries 2 -- about a young American who inherited a principality in Europe and had to marry within a month or lose the throne -- also became a hit. It earned $23 million over the weekend and $37 million in five days.

Expect the medium budget film to earn at least $90 million. The prospects of it hitting the century mark are quite bright. Surely, Disney must have okayed the third film in the series after watching the five-day performance. For Disney, which suffered a number of high budget flops in the past eight months including Around The World, this is the second success in a month, following M Night Shyamalan's The Village.

The scary Shyamalan movie, which cost about $60 million, earned $99.7 million in less than three weeks and will undoubtedly recoup its investment from its American run alone. Yet the big tumble it suffered placed The Village sixth on the chart, following the kid film Yu-Gi-Oh! The Movie which opened with a disappointing gross and the still sturdy The Bourne Supremacy which reached about $139 million.

Despite the arrival of films such as Collateral, which is doing steady business at the third place and is heading to the $100 million mark, Bourne has maintained its supremacy and could hang around for another four weeks at least.

The animated kid flick Yu-Gi-Oh! The Movie, adapted from the television cartoon show from Japan, debuted at No 4 with $9.4 million. The Bourne Supremacy, at the fifth position, fell by about 42 per cent from the previous week. The Village at the sixth hemorrhaged by about 57 per cent.

The critically acclaimed The Manchurian Candidate is bound to make a decent profit in the long run when the video and DVD sales and foreign grosses are factored in, but it is performing below expectations in North America. At the seventh position with a $48 million gross, the much-hyped film could take about $60 million in the final reckoning in North America.

Last week's disappointment The Little Black Book did not have good luck over the weekend. Teenagers, especially young women, were busy voting for royalty, turning Princess Diaries 2 an instant hit.

The ninth and tenth positions on the chart were held by sci-fi, fantasy adventures, I, Robot and Spider-Man 2.

The much smaller film Harold And Kumar Go To White Castle was thrown out of the top 10 chart. In its third week, Harold And Kumar fell by about 45 per cent from its previous week's collections, and is headed for an unexciting $20 million gross. But when DVD and video versions come out, it could be quite another story.

The box office this week: