Cat purrs to the top 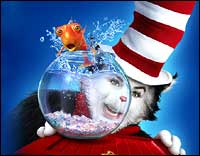 The kid friendly Dr Seuss' The Cat In The Hat opened with a roaring $40 million in three days despite a barrage of negative criticism.

Few big budget films received such scornful reviews this year as this $105 million movie starring Mike Meyers as the cat who brings chaos and delight to the lives of two young and bored children.

Based on a slim book by Dr Seuss, the Universal Pictures movie needed three scriptwriters to pad it up.

And in the rival Chicago Tribune, Marc Caro wrote: 'You shouldn't have to add burps, farts and dog pee to Dr Seuss.'

Sally (Dakota Fanning) and Conrad (Spencer Breslin) are not only bored but also wonder at their mother's choice. Mother (Kelly Preston) is interested in neighbour Quinn (Alec Baldwin). But Conrad rightly suspects Quinn is a fraud. He hates Quinn even more because he wants to send Conrad to a military school.

Mother is unexpectedly called to the office one day leaving precocious Sally and devious Conrad with orders not to mess up the home. She has invited her boss and colleagues home for a big bash. But the six-foot Cat with his red-and-white hat arrives. He has little on his mind but a good, chaotic time. And the home is soon a wreck.

Following the chaotic merrymaking, the Cat, Conrad and Sally must quickly repair the damage before their mother arrives home to welcome the guests.

The movie, with elaborate sets filled with vibrant colours to recreate the fantastical world of Dr Seuss, is short on mirth and tempo.

Children apparently had good fun with the burping and farting. How the film will hold up in the coming weeks is another story. The previous big budget Dr Seuss adaptation, How The Grinch Stole Christmas, starring Jim Carrey, was a huge hit three years ago, earning $260 million in North America and about $100 million abroad.

The big, if not spectacular, opening for the Cat sent the family hit Brother Bear reeling. The movie went down by more than 55 per cent compared to the previous week. Unless it holds steady in the coming weeks, the Disney movie which was at seventh position on the box-office charts may not reach the $100 million benchmark. It grossed a decent $70 million.

Disappearing fast is Looney Tunes: Back In Action that opened with anaemic numbers last week. The $70 million movie is one of the biggest flops among family-oriented films in recent years.

Gothika, the second high profile movie to open the weekend, was seen by Hollywood as a test for Halle Berry: if she could open a film with a bang on her own. The film, incorporating suspense, supernaturalism and horror, was generally panned by many critics.

Berry plays a criminal psychiatrist who has no memory of her husband's murder. When she is charged with murder, she cannot understand what has been happening to her. Could it be that she was possessed by the ghost of the young woman that led her to kill? With the young woman's ghost haunting her, the psychiatrist is pushed into unearthing the real reason for the murder.

'This is a D-list starlet's movie,' complained Boston Globe's Wesley Morris. While Chicago Sun-Times' Roger Ebert, who was clearly in a minority, declared, 'I cherished this movie in all of its lurid glory,' Hollywood Reporter's Michael Rechtshaffen joined most of his peers in slamming the film. 'By the time Gothika reaches a particularly lame denouement it, too, has become a ghost of its promising former self,' he wrote.

In The New York Times, A O Scott noted: 'It is a thoroughly synthetic confection, compounded by clichés drawn from a half-dozen genres and subgenres.'

Considering the film was playing in about 2,400 theatres, unlike most other films which were in over 3,000 movie houses, its $19.6 million gross was considered strong. The $40 million film was at the second place on the chart, sending out the signals that it could be quite profitable.

The three films with sturdy feet were Elf, which was at the third place on the top 10 list, followed by the meditative sea saga Master And Commander, the best-reviewed big budget film of the season, and Love Actually.

The feel-good romantic comedy Love Actually led by Hugh Grant added 500 screens, taking its total count to 1,600. It increased its box-office clout by about five per cent, rising to the fifth position on the chart.

Among the smaller budget films, the highly intense and suspenseful film 21 Grams, which eschews the linear storytelling approach, earned a promising $250,000 in eight theaters in New York and Los Angeles. It is adding about 60 theaters this week.

The box office this week: