Jay Bhanushali, aka Neev from Star Plus' Kayamath, is likely to quit the show.

He is all set to star in a new Balaji Telefilms show called Krazy. The story revolves around college students and Jay will be seen in a new persona.

But ask him about it, and Jay gets tight-lipped. "There have been discussions between Ekta and me last month. But nothing has been confirmed," he says. "I have not yet signed the contract."

Jay is very happy with the new reality show on Sony Entertainment Television, Ustaadon Ka Ustaad, with dance partner Bindi. "The best part of the show is that the judges had all the power. We have enjoyed a lot. I am jobless until a new show starts," he says.

If you are a film star and have some free time to spare, what do you do? You would either endorse new products, or, as is the new trend these days, judge a reality show on television. 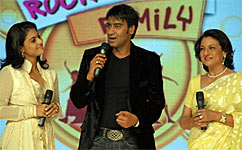 Ajay Devgan, Kajol, Tanuja and Javed Akhtar are all party to this. With more reality shows coming on TV channels, it seems to be the easiest and best way to make money and stay in the spotlight.

Urmila Matondkar is another film star, who realised this. After getting a taste of the small screen by judging Jhalak Dikhla Jaa last year, she is back in Gajendra Singh's War Pariwaar.

With the biggest names like Amitabh Bachchan, Shah Rukh Khan and Salman Khan deciding to host television shows, it's no wonder that others are following. 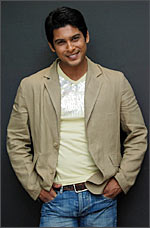 He was the first Indian to win the title of Best Model of the World in Turkey, in 2005. He was happy with modelling, until he realised that acting offered more opportunities to unleash his creativity.

"I auditioned for Shub Ranawat's role and was selected immediately. I am happy that I took the decision and am cherishing every moment of the show," says Siddharth.

Not many know that Siddharth is an interior designer. After his acting days are done, Siddharth plans on taking it up as a profession.

I was prepared to die, but after killing terrorists
Business emailOffice email AppDomain registrationWebsiteRediffmailMoneyCompany emailOnline ShoppingBooksGiftsVideosBlogsBuzz
▲