It seems Hiten Tejwani's excellent PR skills are paying rich dividends. How else could one explain his and his wife Gauri's smooth sailing into the third round of Nach Baliye 2? Admittedly, the duo showed an improvement, but they are still nowhere near the mark.

The grapevine tells us that Hiten has a fan club in Mumbai, with members working overtime with their mobile phones to ensure their favourite hero stays afloat. And why not? Hiten takes calls and talks to them regularly, caters to all possible requests and makes sure he doesn't come across as pricey.

Coming back to life

Besides, this time around, the celebrity quotient for the show doesn't seem that high either. Abbas' guests now will be the likes of TV stars like Rohit Roy and Mandira Bedi. Quite a nosedive from the original version, which featured stars like Shah Rukh Khan and Sanjay Dutt. 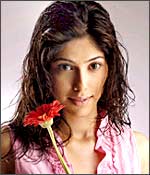 In soaps on Indian television, good ladies turn bad very easily, but rarely does a vamp turn into a sati savitri. That's what is scheduled for Addite Shirwaikar (left), Chandramukhi in Zee's Dulhan.

The storyline is undergoing a big change with Chandramukhi falling in love with Romanchak. And the industrious Addite is so kicked about this change that she even shot for the show on her birthday. So if you saw her as the bad girl in Dulhan, prepare for her good side.

Just recently, the industry was abuzz with rumours of Amna Sharief following her beau Rajeev Khandelwal in quitting the popular show, Kaahin To Hoga.

Now, the rumour is back but isn't restricting itself to Amna. It is said that the serial is going off-air. However, when asked to comment on this, Star TV denied knowledge of any such eventuality. Repeated attempts to contact Amna were in vain.