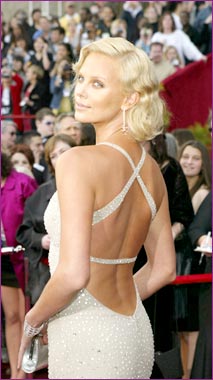 She said, in her Oscar acceptance speech, "I know everybody in New Zealand has been thanked. So I'm going to thank everybody in South Africa, my home country. They're all watching tonight. And I'm bringing this home next week."

Watch and celebrate Charlize Theron's success they did, indeed. A report in The Guardian mentions that President Thabo Mbeki cheered loud and long. He said in a statement, "South Africa has done it again: the Nobel prize for peace [Nelson Mandela], Nobel for literature [Nadine Gordimer, J M Coetzee]. And now, an Oscar for Best Actress. Theron has proved that we as a nation can produce the best in the world."

But residents of her hometown Benoni, will have to travel 35 kilometres to Johannesburg, to see Monster. Theron won the Oscar for her role as a serial killing prostitute in the film, based on real-life killer Aileen Wournos.

And the reason Benoni residents will not be able to see it in their town is that, apparently, the film's South African distributor believes they are 'too downmarket to appreciate it'.