Bollywood festival on Turner channel in US

It's Bollywood time in the US of A. And this time, it's free. No $10 tickets to buy to watch a film that might or might not satisfy.

In a first, Turner Classic Movies brings some Hindi film classics to the small screen as part of a month-long film festival beginning June 5, and every Thursday thereafter.

From such classics as Jaagte Raho and Pyaasa to Sholay (right) to the more contemporary Rangeela and Dil Chahta Hai, Bollywood will strut the TCM screen in its many-hued avatars for a full month, bringing an exotic new flavor to American audiences who are only recently waking up to one of the largest film industries in the world.

One major advantage for viewers will be the lack of any commercial breaks, a strategy TCM follows regularly. "We don't go for ratings like other channels and don't rely on advertising for sustenance," says Atlanta-based Charles Tabesh, senior vice president of programming for TCM.

TCM normally draws its programming from a combined library of Turner Movies and Time-Warner films, which together hold one of the largest film libraries in the world, from the 1920s through the 1980s.

Co-hosting the festival will be producer-director Ismail Merchant, who will provide history and context to each film. Merchant was picked over Mira Nair, director of such crossover films as Monsoon Wedding and Mississippi Masala and who couldn't fit the hosting schedule into her shooting dates.

Getting the films to the screen hasn't been easy, though. As Tabesh told rediff.com, "We couldn't get the prints directly from India and had to source it from Channel 4 in London." 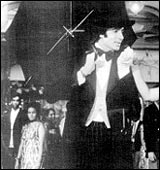 Interestingly, the festival will be largely in reverse chronological order. "The idea is to start off with where the Hindi film industry is now and then move back to show the progression."

Unfortunately, some of the older films are being clubbed with newer ones on a late night slot due to the quality of the prints. "Amar Akbar Anthony (right), for example, had to take a 2 am slot due to the poor picture quality," Tabesh said.

Therefore, 8 pm, June 5, will have the Shah Rukh Khan-Kajol blockbuster Dilwale Dulhaniya Le Jayenge (left), leading into Mani Ratnam's Bombay at 11:30 pm and then the ultimate masala movie Amar Akbar Anthony at 2 am.

The movies were picked by Nasreen Munni Kabir of Channel 4, who Tabesh initially approached with the idea after hearing of a similar initiative by the British channel. "I had heard about Hindi films and their powerful impact but I didn't know enough so I approached LA film critic David Shute who put me on to Kabir," Tabesh told rediff.com "I was curious about Bollywood and I figured other Americans might be too."