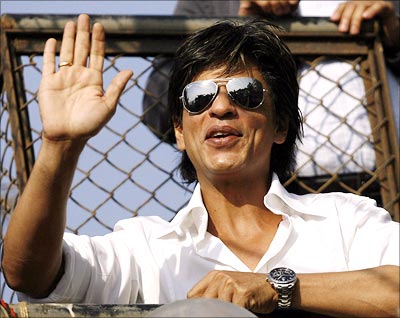 Shah Rukh Khan bagged the most exclusive suite at the opening party of Dubai's Atlantis Palm Jumeirah, leaving behind a host of Hollywood celebrities.

The over Rs 18 lakh-a night exclusive suite, suspended between the resort's two towers, was initially slated for talk show queen Oprah Winfrey but when she pulled out from the party, it went to King Khan, the Daily Mail reported.

Shah Rukh is the most famous filmstar in Middle East. Hollywood legend Robert De Niro a partner in the Nobu restaurant chain which has a site in the resort -- had to make do with an over Rs 11 lakh-a night presidential suite.

Filmstars Lindsay Lohan and Charlize Theron bagged Rs seven lakh-a night suite in Lost Chambers submerged, alongside one of the world's largest aquariums in the depths of the Atlantis resort with a bedroom view of 65,000 sharks, rays and fish, the paper said.

The opening of Dubai's Atlantis Palm Jumeirah, a man-made island shaped like palm tree, was attended by over two thousand film stars, popstars, supermodels and billionaires from around the world.

The highlight of the ceremony was a performance by Australian singer Kylie Minogue and her 113-strong dance troupe on the beach. Minogue's performance was followed by a one-million-rocket firework display with 100 computer-guided rockets, seven times bigger than Beijing Olympics, which is the largest firework display till date.